When private investigator Philip Marlowe accepts the blackmail case of one of Los Angeles’ wealthiest men, his probe leads deep into a web of lies, drugs, pornography and murder woven around his client’s two beautiful daughters. But Marlowe’s most startling discovery is his inexorable attraction to one of the sisters. (Courtesy Warner Bros. Pictures) 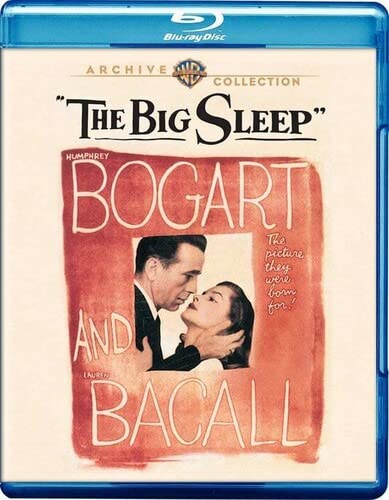 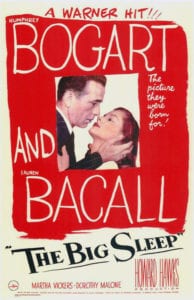 In Howard Hawk‘s ‘The Big Sleep’, General Sternwood asks Philip Marlowe, Private Eye, to come visit him at his mansion. His daughter, Carmen owes Arthur Geiger money from gambling debts which he wants Marlowe to resolve.

Marlowe accepts the job, and as he leaves to begin the case, Sternwood’s older daughter, Vivian Rutledge, asks to meet with him as well. Vivian thinks her father has ulterior motives because his protégé, Sean Regan, vanished a month ago under mysterious circumstances.

Unfazed by that revelation, Marlowe heads to Geiger’s bookstore where he finds Agnes Louzier working alone. She quickly kick him out of the store. After a bit of waiting in another shop across the street, Marlowe spots Geiger leave the bookstore, and he follows him home.

Once Geiger goes inside, Marlowe snoops around the outside of his place. Suddenly, a gun fires. A woman screams.

Marlowe breaks into Geiger’s home to find his dead body on the floor, and Strenwood’s daughter confused and heavily drugged. He also finds a hidden camera with the film removed in what appears to be taken in a rush.

To keep Carmen’s name out of the murder, Marlowe takes her home to Vivian, and then returns to Geiger’s home, but once there, he finds someone removed the dead body.

The next morning, Vivian pays Marlowe a visit at his quaint office. In her had are some compromising photos of Carmen as part of someone’s blackmail scheme.

Marlowe hightails it back to Geiger’s bookstore to look for clues, but once again, Agnes turns him away. Luckily, he spots a car sneaking out the back alley, and hires a cab to follow it. They end up at the apartment of gambler Joe Brody. He’s the guy who previously blackmailed General Sternwood, and it looks like he’s doing it again!

Instead of confronting Joe, Marlowe goes back to Geiger’s house to look for more clues, but is surprised to find Carmen there claiming Brody killed Geiger. Eddie Mars, a local gangster and owner of Geiger’s house, shows up, and interrupts the two. After a brief chat with Mars’ goons, Marlowe leaves to pay Brody a visit.

Guess who’s at Brody’s place? Brody, Agnes…and Vivian! Before Marlowe can make sense of it all, Carmen shows up with a gun; demanding Joe give her the negatives of her risqué photos. Marlowe manages to take Carmen’s gun, and send her and Vivian on their merry way.

After a bit of interrogating, Brody cracks, and admits he blackmailed Vivian and Carmen. There’s a knock at the door, and Marlowe makes Brody open it. Suddenly, a gun fires. A woman screams, and Joe falls to the ground, dead.

There’s a quick chase which results in Marlowe nabbing Geiger’s former driver, Carol Lundgren. Marlowe calls the police to arrest Lundgren. Once they arrive, he then pays Mars a visit at his casino to inquire about Sean Regan…and to see if it’s true that Regan ran off with Mars’ wife.

Mars won’t give any straight answers. Eventualy, he changes the subject claiming Vivian is picking up some big gambling debts of her own. Vivian manages to win a big pot, so Marlowe takes her home while the getting is good.

One of Mars’ cronies tries to rob Vivian of her winnings in the parking lot, but Marlowe knocks the guy out. Marlowe then grills Vivian on the way home about her ties to Mars, but he can’t make her talk. Finally, after a long day, Marlowe makes it back to his house. Unfortunately, Carmen’s waiting for him there, all sexed up.

She’s willing to give up a little information to Marlowe as well. She never cared for Regan, and Mars calls Vivian all the time.

In the morning, Vivian lets Marlowe know Regan’s been found hiding in Mexico, and that she’s going to visit him, so he can stop looking for the guy. She pays Marlowe for his time and leaves. Marlowe continues on the case anyway. This pisses Mars off who has his goons beat the snot out of Marlowe as a stronger warning.

Harry Jones, a man in love with Agnes, then pops up out of nowhere, picks Marlowe off the ground, and offers to reveal Mars’ wife’s location for $200.

Marlowe agrees to pay him for the information, but when they meet up later at an undisclosed office, Mars’ hitman, Canino, shows up, and kills Jones with poisoned water while Marlowe helplessly waits in the next office over.

Agnes calls the office right after Canino leaves, and Marlowe arranges to meet her for the information. There, Agnes tells Marlowe that Mona Mars is hold up behind an auto repair shop outside the town of Realito.

Marlowe heads out, but once there, Canino gets the better of him, knocks him out, and ties him up. When Marlowe wakes up, he finds Vivian there with Mars’ wife. When he and Vivian are alone, Marlowe manages to talk her into untying him. He gets his gun, and kills Canino in self defense.

The two head back to Geiger’s house where they call Mars. Pretending to still be in Realito, Marlowe agrees to meet Mars at Geiger’s house. Mars quickly arrives with four of his cronies who set up an ambush outside the house’s front door.

Mars enters the house, and finds Marlowe there; much to his surprise. Marlowe tells Mars he knows the truth about him blackmailing Vivian over Carmen’s alleged killing of Regan when in truth, she never did.

He forces Mars to leave out the front door where Mars’ own goons shoot and kill him. Marlowe then calls the cops, and lets them in on the killer’s real identity for a happy ending.