Henry Brougham is an Episcopal bishop who has become obsessed with raising funds for an elaborate new cathedral that he loses sight of what is truly important. After he prays for divine guidance, a mysterious man named Dudley appears and informs Henry that he is the answer to his prayers. The charismatic Dudley soon sets about helping everyone he meets, but not necessarily in the way they would have preferred. However, when Dudley’s presence begins to threaten Henry’s marriage to the lovely Julia, Henry once again begins to remember what is truly important. 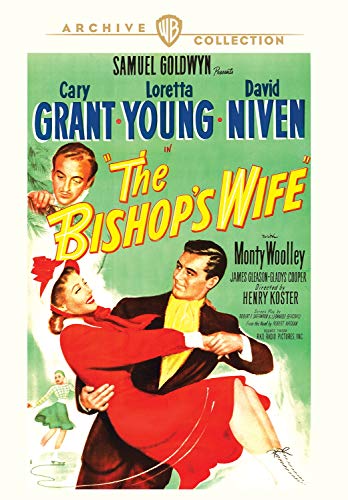 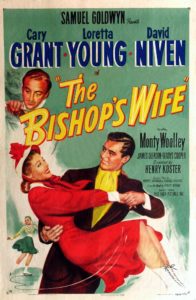 Newly appointed Bishop Henry Brougham (David Niven) struggles to find funding for the construction of a new cathedral. Desperate, the Episcopal prays for divine guidance to help him through his troubles. His pleas are answered in the form of an angel named Dudley (Cary Grant). Dudley reveals his identity only to Henry, but Dudley’s true purpose is not to help Henry acquire the funding to build the cathedral. He has been sent to spiritually guide Henry and the people around him. Henry has become obsessed with raising funds for the cathedral and has neglected his family. Henry’s relationships with his beautiful wife Julia (Loretta Young) and their young daughter Debby (Karolyn Grimes) are extremely strained due to his concentrated focus on the cathedral construction funding.

Dudley is very charming and everyone who encounters him likes him, including the extremely non-religious Professor Wutheridge (Monty Woolley). Dudley helps Henry by getting several wealthy parishioners to contribute desperately needed funds, specifically the widowed Agnes Hamilton (Gladys Cooper). However, even though Dudley gets them to contribute the money, their contributions are not for the purpose of building the cathedral. He convinces Mrs. Hamilton to donate her money to feed and clothe the needy. The income of money to the church earmarked for other purposes begins to frustrate Henry.

Additionally, Dudley helps the Brougham family as well. He redecorates their Christmas tree in a matter of seconds when the family is pressed for time. Dudley helps to save a church by creating interest in the needy church’s boys’ choir. Dudley also dictates to a typewriter that magically produces Henry’s new sermon, without the Bishop knowing anything about it.

However, Dudley’s time spent cheering up Julia causes an unexpected development for the heaven sent angel. Dudley begins to find himself attracted to the married woman. Henry senses the growing attraction and becomes jealous and eagerly looks forward to Dudley completing his task and leaving. In the darkness of his jealousy, Henry reveals Dudley’s true identity to Professor Wutheridge. The professor urges Henry to stand up and fight for the woman he loves.

Meanwhile, Dudley informs Julia of his willingness to stay. Julia, understanding what Dudley’s true intentions are and remembering her devotion to her husband, tells Dudley that it is time for him to leave. Before he leaves, Dudley tells Henry that it is extremely rare for an angel to envy a mortal on Earth. Confused, Henry asks Dudley why he derailed Henry’s cathedral plans. Dudley reminds Henry that he prayed for guidance, not for a building.

With Henry refocused on what is truly important and knowing that Julia truly loves her husband, Dudley makes his exit. The angel promises never to return. Once he leaves, all memories of Dudley are erased. However, the magical sermon remains and Henry delivers it at midnight on Christmas Eve, believing that he wrote the inspirational sermon. Dudley watches the sermon from the street, an expression of satisfaction on his face.