In search of a local legend, three documentarians—director, Heather; cameraman, Josh; and sound recorder, Mike hike into Burkittsville’s gloomy Black Hills Forest. They’re out to find the fabled Blair Witch. One year passes after they set out in October of 1994 with no sign of these student filmmakers aside from the raw footage they left behind. Was there, indeed, something to the supernatural tale out in the dark woods that led to the team’s disappearance? 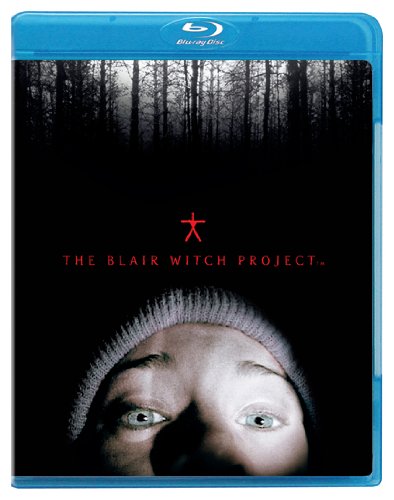 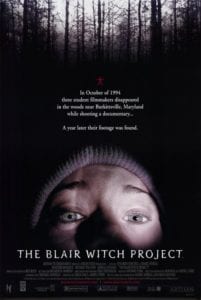 The Blair Witch Project opens like the lead in to a joke: three filmmakers go into the woods. However, there is not a lot that is funny about this film. And probably not much in this summary. We are introduced to the film that in October of 1994, three students disappeared into the woods near the small town of Burkittsville, Maryland while they were shooting a documentary about the legendary Blair Witch. And by legendary, we mean legendary like Flash Gordon, or Indiana Jones, or even Ronald Reagan. A work of complete fiction legendary — much like Regan’s hair.

A year after their disappearance, the footage of their documentary was found. The Blair Witch Project is the fictional release of their film. The three students, hippie Josh, asshole Mike, and controlling know it all bitch Heather, travel to Burkitsville, formerly the town of Blair, and interview the local yocals about the Blair Witch. The Blair Witch is the spirit of Elly Kedward, a witch who was hung by some undoubtedly god fearing people in the 18th century.

Probably due to her amazing wood working skills and her love for metal music. Since her death, the town has been terrorized by a her spirit that appears to take either the form of a mist, or a woman covered in hair desperately looking for a Bic razor — similar to the 1998 Japanese horror film The Ring (or 2002’s American version of The Ring), but not as well done. Actually, you might want to stop now, and just watch the Ring.

The legend of the Blair Witch became legendary when Rustin Parr, a hermit who lived in the woods near the town, kidnapped seven children in the 1940’s and brought them to his house in the middle of nowhere. Parr tortured and murdered the kids, because seven kids will drive you insane, ask Jon Goselin. Parr’s method of choice was to take two kids into the basement, and have one kid face the corner and listen to their companion’s scream while he murdered the second child.

He would then kill the first kid. And before you think about it, seven kids is not an even number, so I have no idea how he killed the last kid. Goselin probably would have killed his bitch of a wife last, but then again, he was smart enough to have an even eight kids.

Eventually, Parr turned himself into police and pled insanity. The murderer claimed that the spirit of the Blair Witch promised to leave him alone if he murdered the children. Anyone who has ever lived with a nagging bitch, you know you will do anything to have them shut up. Despite his claim, Parr was eventually hung, finding the peace that he never could find in the woods.

Now, our filmmakers head off into the woods to shoot footage of the area. Before beginning their hike, they encounter two fishermen from the cast of the latest Scooby Doo cartoon, who warn “you kids will never learn.” They tell the filmmakers of a story of a young girl who went missing for three days in 1888 who reported seeing an old woman whose feet never touched the ground, much like Kanye. Despite the fishermen’s warnings, those meddling kids head off to woods to make their documentary.

The destination is Coffin Rock, where five men were found bound and ritualistically murdered in the 19th century. Along the way, Heather films everything, possibly to document everything that Mike and Josh do wrong so she can nag them later. The trio come across what appear to be seven small graves in the woods. At night, when they camp out, they hear cackling sounds in the darkness that seem to come from all directions.

After their one night in the woods, the students attempt to walk out of the woods and back to their car. Unfortunately, they put Heather in charge of the map, and since guys never stop and ask for directions, they get lost. What was to be a one night excursion, now goes on for six day fight for survival. The trio is hungry, tired, and aimlessly going nowhere, much like the Democratic party.

Every night they are subjected to more and more disturbing and inhuman sounds. And even after Heather shuts up, they still hear scary noises in the woods as well. Eventually, Josh disappears in the night, and Mike and Heather become fearful that they maybe next.

That night, they hear Josh calling for them to help him, but the duo can’t find him in the dark woods. The next morning, Heather finds a bundle of sticks and fabric outside the tent. When she opens the bundle, she finds torn pieces of Josh’s shirt covered in blood, as well as teeth and hair. And because she is a woman, and women keep secrets of horrible shit that they shouldn’t, Heather doesn’t tell Mike what she finds.

That night, Mike and Heather hear Josh calling for them again. This time, they are able to track the cries to an abandon house in the woods. Heather and Mike rush into the house, where they find small child handprints on the wall, and Josh’s torn shirt.

Mike runs down into the basement where he is knocked down by something unseen. When a desperate Heather follows him down, she too is knocked down. However, the camera she was holding continues to film and catches a very much alive Mike standing, facing a corner. Just like the Rustin Parr did to the children so very long ago. So, in the end, bitchy Heather is dead, and the Blair Witch is the hero of the film.