In 1843, Paul Regret (Stuart Whitman) is a womanizing gambler who finds himself wanted by the law after killing another man in a legal duel over a woman. Regret goes on the run towards Texas, where he is arrested by Texas Ranger Jake Cutter (John Wayne). Regret escapes Cutter once before being rearrested. Ultimately, Regret joins with Cutter to investigate and stop a criminal organization known as the Comancheros. However, Regret’s questionable loyalties will be put to their test when he discovers that the love of his life, Pilar Graile (Ina Balin), is the daughter of the Comanchero leader. 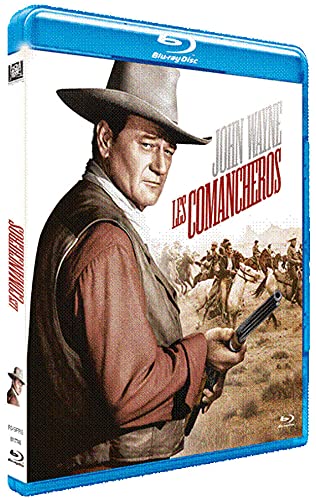 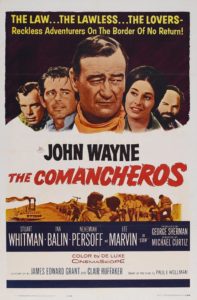 In 1843 News Orleans, gambler and womanizer Paul Regret (Stuart Whitman) engages in a duel with Emil Bouvier (Gregg Palmer) over a woman. Regret inadvertently kills his opponent even though he fires to wound. The witnesses inform Regret that Bouvier is the son of a local judge who will undoubtedly seek the death penalty against Regret for the killing. Regret immediately goes on the run and begins to head to Texas. Along the way, he travels on a ship and encounters a mysterious woman named Pilar Graile (Ina Balin). Pilar is a wealthy woman who is used to getting her way. She is attracted to Regret and proposes that the two of them begin a sexual fling. Despite his freelancing ways, Regret begins to fall in love.

At the next port, Pilar leaves Regret behind on the boat, and Regret is captured by Texas Ranger Captain Jake Cutter (John Wayne). Regret asks Cutter if he can say goodbye to Pilar, but the younger man finds his potential love has left him. Cutter begins to transport Regret back to Texas Ranger headquarters. Along the way, Cutter and Regret stop at a homestead of a group of settlers that Cutter knows. The settlers have been massacred by the local Comanche tribe. Cutter and Regret give the settlers a burial, but Regret takes advantage of the situation and clubs Cutter in the head with a shovel and escapes. Cutter wakes up several hours later and heads back to his headquarters empty handed.

Once back at his headquarters, Cutter is given a new assignment to impersonate a gun runner known as Ed McBain to infiltrate and learn the location of a group of Comancheros, a large criminal gang that smuggles guns and whisky to the Comanche Indians, allowing both groups to keep the Texas frontier in a state of violence. As McBain, Cutter joins with another outlaw, Tully Crow (Lee Marvin). Crow and Cutter develop an uneasy alliance, but the hot-headed Crow eventually turns on Cutter after he believes the law man cheats him out of money in a card game. In attendance at the card game is Regret, who does not reveal Cutter’s identity as a law man. Cutter kills Crow in a shoot out and then rearrests Regret.

On the way back to Texas Ranger headquarters, Cutter and Regret stop at a ranch owned by one of Cutter’s friends. The ranch is attacked by Comanche. During the attack, Regret suddenly rides off on a horse, causing Cutter to believe that he is escaping again. However, Regret returns a short time later leading a cadre of Texas Rangers to the attack. The Rangers fight off the Comanche, and in the aftermath, the entirety of the Rangers’ organization vow to lie to protect Regret. They each falsely swear that Regret could not have killed the man in the duel because he was acting as a Ranger to spy on the Comanchero’s supply line. The Rangers then swear in Regret as an official Texas Ranger.

A short time later, Cutter and Regret impersonate one of the Comancheros’ suppliers and head out into the frontier. Cutter and Regret are followed by another Ranger, Tobe (Patrick Wayne), who keeps tabs on them from a distance so that he can report Cutter’s progress to the main Texas Ranger forces. Cutter and Regret soon encounter the Comanchero forces and are captured. They are strung up and forced to suffer the heat of the desert. However, Pilar appears and orders the two men released. Pilar is the daughter of the ruthless Comanchero leader Graile (Nehemiah Persoff). The handicapped Graile is skeptical of Cutter and Regret, but agrees to his daughter’s desires, recognizing her attraction to the young Regret.

Not long after, Tobe is captured and killed by Comanchero forces before he can relay Cutter and Regret’s location to his commander, Major Henry (Bruce Cabot). At the same time, Pilar agrees to help Cutter and Regret escape her father’s custody, but Cutter refuses to leave without arresting Graile. Cutter steals a gun from a random Comanchero and confronts the criminal warlord during dinner. Pilar begs for her father to leave with them, but Graile refuses, stating that he will not abandon the criminal organization that he built. Cutter holds Graile and his henchmen Aemlung (Michael Ansara) at gun point, and the entire group attempts to leave under the cover of darkness.

On the way out of camp, Graile yells out for the assistance of his men and awakens the entire camp. The mother of a man who was executed by Graile earlier in the film runs up to the wagon and stabs Graile in the back, killing him. Aemlung jumps off the wagon and rejoins the Comancheros. Regret drives the wagon away with Cutter providing rifle cover from the back of the wagon. They are pursued by the Comancheros and the Comanche. Regret accidentally crashes the wagon, and just when things look dim for Cutter, Regret, and Pilar, the Rangers arrive to save the day. During the last skirmish, Aemlung tries to kill Cutter, but Regret shoots and kills the assassin. A short time later, the Rangers clean out the Comancheros headquarters. Regret decides to leave the Rangers and rides off south towards Mexico with Pilar.