Someone is assassinating esteemed scientists throughout the world before a major scientific convention in Dallas, Texas. All that is known is that the killings have something to do with the upcoming International World Arms Removal project. It’s a big, sophisticated, state-of-the-art satellite which can detect any weapon, big or small, under any weather condition. After scientist Antonio Morales fears he’s the next target, he asks for the Agency’s protection. Special Agent Samantha Maxx is up for the challenge, but can Ms. Maxx stop the Black Widow and her assassins? 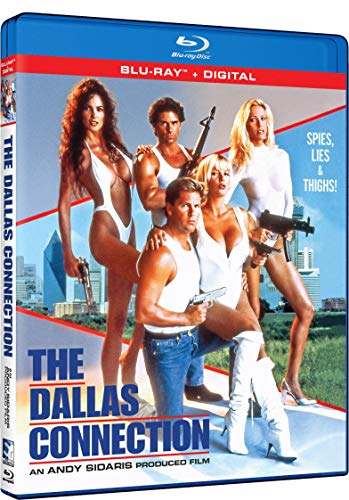 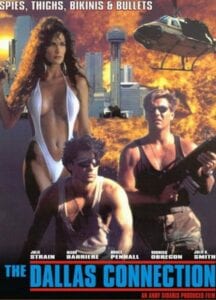 The Dallas Connection begins in Paris, France. The Black Widow seduces and has sex with the scientist, Jean Pierre, before he leaves to attend a scientific conference in Dallas, Texas. She shoots him between the eyes as his mansion as a parting gift. Her henchman, Platter Puss, arrives, and takes her to a plane where they fly to Dallas.

Meanwhile, on a ranch in Cape Town, South Africa, scientist Peter Vandermeer leaves to attend the same scientific convention in Dallas. A woman named Cobra drives a remote control car armed with explosives over to his car, and blows it up. She then heads to Dallas herself.

Meanwhile, meanwhile, in Hong Kong, Dr. Sun Hee Wang and his associate, Dr. Joe, meets a woman named Scorpion at a country club to play golf. Before they can finish their game, and head to Dallas, Scorpion switches Wong’s ball with an exploding one. He goes up in flames, and she’s off to Dallas too.

In Washington, the Agency is a tad bit alarmed. They call Special Agent Samantha Maxx into action. She and Nicholas Lang head to Dallas as well, and on the flight over, Nicholas tells Samantha that these killings have something to do with the International/World Arms Removal project.

The project is a sophisticated, state-of-the-art satellite which can detect any weapon, big or small, under any weather condition. The three scientists killed are part of that project; leaving only one more scientist, Antonio Morales alive. Currently, Morales is on a plane to Dallas himself for the conference there.

Samantha calls Chris Cannon and Mark Austin to meet her at the Dallas airport, so the three can be there for Morales when he arrives to protect him.

The Black Widow meets with Cobra and Scorpion at a strip club/dance hall place in Dallas called Cowboys. The two girls take a shower for no other reason than to get naked before Black Widow then orders Cobra and Platter Puss to the airport to kill Morales. As the Agency agents escort Morales to the I/WAR office, Platter Puss takes a shot at everyone. He misses terribly; like he’s shooting blanks or something.

At the I/WAR office, the agents meet with Morales to get his approval to let them protect him while still trying to use him as bait to find out the identity of the assassins. Morales agrees, and as he and his bodyguard, Ron, leave, Ron plants a bug under the table so they can eavesdrop on the Agency. Nicholas gives each agent one of the satellite’s computer chips, which the assassins are known to be after, to protect.

Mark and Samantha take a moment to suck the polish off each other’s toes before we head to Cowboys for some gratuitous topless dancing. Tom talks into a recorder and drives around town with Morales. After a long night, Tom then gives Morales over to Samantha to watch. They head to the Louisiana Downs racetrack to watch the horses as we head back to Cowboys.

At the club, Black Widow gives Cobra and Scorpion their next assignment. As Morales and Samantha watch the horses at Louisiana Downs, Cobra shows up to where Chris is racing his car. She tries to seduce him for his satellite’s computer chip. Meanwhile, Scorpion shows up to where Mark is racing his jet ski to get his chip. Back at the Louisiana Downs, and Samantha has lunch with Morales. He fantasizes about banging Samantha.

Chris bangs Cobra in a hot tub before she slips him a mickey in his drink. She gets chip #1. Scorpion begins to bang Mark in the woods before knocking him out with a taser. She takes chip #2. At I/WAR’s office, Black Widow, Platter Puss, and Fu show up. Black Widow ties up Nicholas in her web, almost rapes him, and then shoots him in the head.

Meanwhile, Fu heads over to the gym where Tom’s working out, and a fight ensues. Fu chokes him out, and then snaps his neck before taking chip #3. As Morales drops off Samantha (Why, I don’t know. She’s supposed to be protecting him at his side until Tom replaces her.) Black Widow sucker punches her. She, Platter Puss, and Fu take Samantha and chip #4.

Chris and Mark come to the next morning, and realize something is up, but they still have their chips…or were they unknowingly switched? They head back to the airport where Platter Puss first shot at them, and realize the bullets were blanks. They head back to I/WAR offices after learning that Tom and Nicholas are dead.

Back at Cowboys, we are treated to some topless tryouts as Chris and Mark show up. The hostess, Kim tells them of Black Widow’s hideout, and they head there. She, Cobra, Scorpion, Platter Puss, and Fu are waiting for them with Samantha as their prisoner. It’s revealed that Morales is their leader, and he now has all four chips in his possession. However, Cobra’s chip isn’t the correct one. She’s a double agent for the Agency—European division, and she switched it with a fake. However, that Morales made a copy of it in Argentina just in case, so he still has all four chips.

Chris and Mark show up, and a fight ensues. They immediately gun down Platter Puss. Mark shoots Scorpion in the arm, and he then fights Ron, who is holding Samantha hostage. Scorpion shoots and kills Ron because she’s now in love with Mark. Cobra and Samantha grab guns, and join the fight. Chris blows up Fu with a grenade launched from his gun.

At the lake, Cobra now has a remote control boat with explosives! Morales and Black Widow are on a boat in the lake, and Samantha guns Morales down. Cobra then sends the remote boat to Black Widow, and blows her up. Morales’ bag flies into the air, and lands at Samantha and Cobra’s feet. The four chips are in it. What luck!

Cobra reveals that she really didn’t kill Vandermeer at the beginning of the film, but the two faked his death. Vandermeer will arrive the next day to activate the satellite as planned. Meanwhile, Scorpion promises to come back for Mark after jail. Samantha is quite jealous.