Once upon a time, a crystal that was the source of Balance and Truth in the Universe was shattered. It dividied the world into two factions: the wicked Skeksis and the peaceful Mystics. Now, as the convergence of the three suns approaches, the Crystal must be healed, or darkness will reign forevermore! It’s up to Jen – the last of his race – to fulfill the prophecy that a Gelfling will return the missing shard to the Crystal and destroy the Skeksis’ evil Empire. Will young Jen’s courage be any match for the unknown dangers that await him? 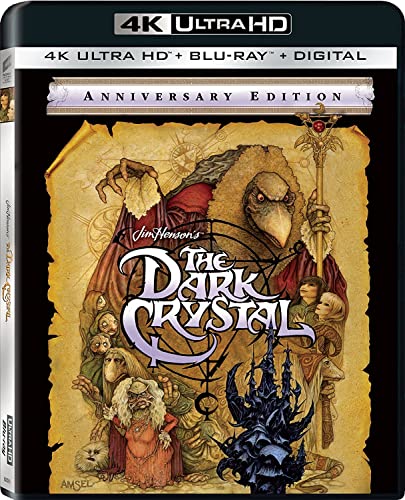 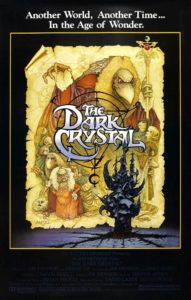 A thousand years ago, on the planet know as Thra, two new races appear out of one when a Shard is broken shattered from the Crystal of Truth. One race is an evil one, looking like something between a reptile and bird called the Skeksis. The other are the wise and gentle urRu who are somewhat more sloth like and are known as Mystics. The Skeksis live in the burnt Castle of the Crystal and extend their cruel lives through the corruption of the Dark Crystal there. The Mystics make their home in the Valley of Stones to await the Great Conjunction of Thra’s three suns.

The Skeksis and the Mystics have a symbiotic relationship and the film begins with the leaders of both races near death as the Great Conjunction is about to begin. The Master, UrSu (Seán Barrett), leads the Mystics and he’s raised a young Gelfling named Jen (Stephen Garlick) after the Skeksis killed everyone in his clan. He tells Jen he must retrieve the Shard from Aughra (Billie Whitelaw). Only a Gelfling can fulfill the prophecy to heal the Crystal with this Shard and bring peace to the planet. If Jen fails, the Skeksis will rule the planet forever.

When UrSu passes away, so does the Skeksis’ Emperor, skekSo (Jerry Nelson), and the evil Skeksis fight for his position. The Chamberlain, skekSil (Barry Dennen) and The General, skekUng (Michael Kilgarriff) wind up challenging each other in a Trial by Stone to be the next emperor. SkekUng easily wins when he cuts the stone in half.

The other Skeksis then strip SkekSil of his robes and banish him before proclaiming skekUng the new emperor. However, this celebration turns to panic once they learn a Gelfling still lives and that Jen is on his way towards fulfilling the prophecy. The new emperor sends his army of giant crabs called Garthim to capture him. SkekSil, still smarting from his humiliation, follows after so that he may nab the Gelfling first.

After a days journey, Jen finally finds Aughra… or rather, she finds him. She takes him to her orrery and tells Jen of the Great Conjunction. She then tosses a bunch of Shards on the ground and tells Jen the one he needs is there. Jen uses his triangle flute to mimic the chant of the Mystics and one of the Shards fluoresces the same shade of purple as the Dark Crystal in the Skeksis’ castle. Jen picks that one.

Jen has no clue what he’s supposed to do with the Shard though and before Aughra tell him what comes next, the Garthim show up and burn the place to the ground. Jen manages to escape but the Garthim capture Aughra (thinking she’s a Gelfling or something). In the commotion, Jen hits one of the Garthim on the claw with the Shard. The Mystics hear it call to them and they leave the valley to return to the Castle of the Crystal.

Once again alone, Jen wanders through a swampy forest-like place. It’s here he meets another surviving Gelfling named Kira (Lisa Maxwell). When Kira reaches out to Jen to pull him out of the water he fell in, the two share a dreamfast and learn about one another’s upbringing. She takes Jen to the clan of Podlings who raised her, but during the night’s party, a group of Garthim raid the village. Jen, Kira, and her pet/dog-thing Fizzgig (Percy Edwards) flee. The Garthim nearly capture them but skekSil shows up to stop them.

Soon Jen and Kira stumble across the ruins of the Gelfling’s civilization. Jen can read the ancient writing which spells out the prophecy to him; When single shines the triple sun, what was sundered and undone shall be whole, the two made one by Gelfling hand or else by none.

Jen knows what he needs to do now, but before the three can leave, skekSil shows up again and says the prophecy is the reason all the Gelfling were killed. He then tries to trick them into returning with him to the castle so that he may get all the glory of capturing the two remaining Gelflings.

Jen balks and the three head to the castle on the backs of Landstriders without him. Once the arrive, they intercept the returning the Garthim that attacked Kira’s village and free the captured Podlings. However, Kira, Jen, and Fizzgig fall off the Castle’s dry moat in the process. Kira reveals she has wings (because all Gelfling girls have them) and they safely fall to the ground.

Once there, they find a large drain that leads to the catacombs under the castle. They head in, but skekSil shows up again and tries to get them to come with him… yet again. Jen stabs skekSil’s hand with the Shard (leading to his Mystic counterpart, urSol (Simon Williamson), to receive the same wound on his hand). In a rage, skekSil knocks down a support beam which causes a cave-in that buries. He then takes Kira to the Skeksis while Fizzgig stays with Jen.

Pleased with skekSil’s actions, the Skeksis reinstate him as Chamberlain. He hands Kira over to the Scientist, skekTek (Steve Whitmire) so that he may drain her life essence which the Skeksis will drink to help them regain their youth.

We see Aughra is also a prisoner in the Scientist’s lab, and she tells Kira to call out to the captive animals in the room to help her. The animals break free in response and knock skekTek into the fiery shaft that’s connected to the room. His death also kills his Mystic counterpart, urTih (Toby Philpott). Kira then flees the room with Aughra still locked up… kind of rude! Meanwhile, Jen’s regained consciousness and is looking for Kira. When he gets to the lab, he finds that Aughra has freed herself and she gives him some parting words.

As the film climaxes, the three suns begin to align. Jen and Kira both wind up above the Crystal Chamber on other sides of the room. The Skeksis gather for their ritual that will grant them immortality. However, they spot Kira when Fizzgig shows up and won’t stop barking. They then spot Jen too. As the Garthim come in for the attack, Jen leaps onto the Crystal… but he drops the Shard.

Kira flies down and grabs the Shard and the Skeksis surround her. SkekUng tosses Fizzgig down the shaft—dont worry; Aughra sees him in the shaft from the lab and saves him—and Kira throws the Shard back up to Jen as the Ritual-Master, skekZok (Jerry Nelson), fatally stabs her.

Heartbroken and pissed off, Jen plunges the Shard into the Dark Crystal’s hole which sets off a chain of solar events that fulfills the prophecy. The Garthim disintegrate. The Podling slaves regain their life’s essence. The dark stone which covers the Castle walls crumbles away to reveal a crystalline structure. The Mystics arrive and use the Crystal to merge themselves with the Skeksis. The become the beings they once were called the urSkeks.

Back as one race, the urSkeks’ leader tells Jen they mistakenly shattered the Crystal 1,000 years ago which split them into two races and decimated Thra. Before the urSkeks ascend to a higher level of existence, they bring Kira back to life and then leave the Crystal of Truth to the two and we see the world of Thra is now rejuvenated.