With the help of Lieutenant James Gordon and District Attorney Harvey Dent, Batman sets out to destroy organized crime in Gotham for good. However, the three soon find a new sinister criminal named The Joker is terrorizing Gotham. He plunges the city into anarchy, and forces Batman closer to crossing the fine line between hero and vigilante. 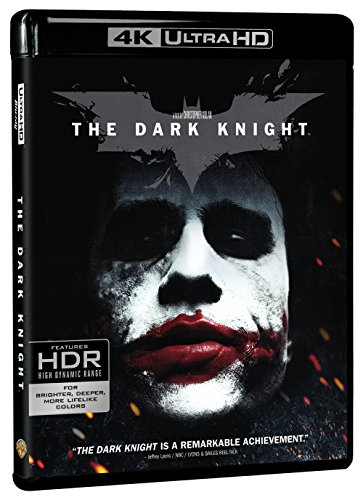 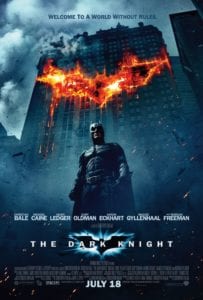 The Dark Knight picks up nine months after the first film. A new threat has entered the Gotham City crime scene, the Joker. The harlequin hooligan is robbing banks, but only banks that have the money of the mob. The mob begins to get desperate. The combination of the Joker and Batman is having an effect on their business operation.

Meanwhile, Batman, the new District Attorney Harvey Dent, and Lieutenant Jim Gordon form an uneasy alliance to rid Gotham of the remaining elements of organized crime in Gotham. They plan to irradiate the mob money and track it. However, Dent is concerned about corruption in Gordon’s police force, and Gordon is concerned about leaks in Dent’s office.

Despite their differences, Dent’s idealism impresses Bruce Wayne, and he offers to support his career. Wayne believes that Dent can become the symbol that Gotham needs, and Wayne could finally give up being Batman and lead a normal life. However, Wayne’s plans hit a snag when his girlfriend of choice, Rachel Dawes, is currently dating the district attorney.

The mob conducts a secret meeting to resolve their bat and clown problem. They talk to a corrupt accountant Lau, who has taken all of the mob’s money, minus the irradiated bills, and fled to Hong Kong. As Lau tells the mob who he will protect their money, the Joker crashes the meeting. The Joker warns the mob that although the police can’t get to Lau in Hong Kong, nothing can stop the Batman from getting him. The clown offers to take care of the mob’s problem by killing Batman, in exchange for half of their money. After initially rejecting the Joker’s offer, the mob agrees to the clown’s terms.

Batman goes to Hong Kong, and kidnaps Lau before bringing him back to Gotham. Lau agrees to give up the mob, in exchange for the protective custody and all the money. Dent arrests the entire mob under RICO laws. The Joker then releases a video in which he threatens to keep killing people unless Batman reveals his identity. He starts by murdering Police Commissioner Loeb and the judge presiding over the mob trial. The Joker also tries to kill Mayor Anthony Garcia, but Gordon appears to sacrifice himself to stop the assassination. Dent learns that Rachel is the next target.

Wayne decides to reveal his secret identity rather than let innocents killed in his name. Before he can, however, Dent announces that he is Batman. The police take Dent into protective custody, and attempt to move him to the Gotham City jail via convoy. The Joker appears, and attacks the convoy. Batman rescues Dent, and Gordon, who faked his death, arrests the Joker. The mayor promotes him to Commissioner. In post arrest celebration, two detectives, on the mob’s payroll, escort Rachel and Dent away .

During an interrogation by Batman, the Joker reveals that Rachel and Dent are trapped in separate locations rigged with explosives. He races to save Rachel, while Gordon goes to save Dent. Batman arrives at the building, realizing that the Joker sent him to Dent’s location instead. Both buildings explode, killing Rachel and disfiguring half of Dent’s face. Meanwhile, the Joker reveals his true plan. He sets off explosives at the Gotham police station, and then escapes the jail with Lau.

The Bat is Out of the Bag

At Wayne Enterprises, an accountant by the name of Coleman Reese, figures out that Wayne is Batman, and tries to go public with the information. After observing the unpredictability of the Joker, Maroni, one of the mob bosses, informs the Joker’s location to Commissioner Gordon. At the same time, the Joker sets fire to the mob’s money, burning Lau alive in the process, and killing several members of the mob. Not wanting Coleman’s revelation to interfere with his plans, the Joker threatens to destroy a hospital unless someone kills the accountant.

Gordon orders the evacuation of all the hospitals in Gotham and goes to secure Coleman. The Joker finds Dent in Gotham General and manipulates him into seeking revenge for Rachel’s death. After setting his true plan into motion, the Joker then destroys the hospital and escapes with a busload of hostages. Dent targets the people he holds responsible for Rachel’s death, and kills based on a coin flip.

Meanwhile, the Joker rigs two ferries with explosives; one containing civilians and the other containing prisoners. He says that he will blow them both up by midnight, but will let one live if the passengers of either boat blows up the other. Batman finds the Joker with a sonar device that spies on the entire city, and against the orders of Gordon, he moves into to stop the clown. The Jokes disguises innocent hostages as his own men, and Batman stops the police from killing them. Then, he apprehends the Joker.

Society Isn’t as Depraved as the Joker Believes

Both the civilians and the prisoners on the ferries refuse to kill each other. They show the Joker that society has not become as depraved as he believes. However, he has the last laugh when he tells Batman that Gotham’s citizens will ultimately lose hope once Dent’s rampage becomes public knowledge.

Dent kidnaps Gordon’s family and summons the police commissioner to the sight of Rachel’s death. Once there, Dent states that he holds Gordon responsible for Rachel’s death. He plans to judge the commissioner’s fate, along with his own and Batman’s, by flipping a coin. He spares himself, shoots Batman, and threatens to kill Gordon’s son. Before he can, Batman, who was wearing body armor, tackles Dent off the building to his death.

Batman persuades Gordon to preserve Dent’s heroic image by holding Batman responsible for the killing spree. In the closing sequence of the film, the police launch a manhunt for Batman. Gordon destroys the Bat-signal. Wayne’s butler, Alfred, burns a letter from Rachel about her choice to marry Dent. And the Batman drives away into the dark night.