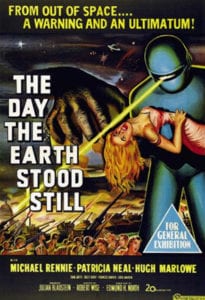 20th Century Fox released The Day the Earth Stood Still on September 18, 1951, and while the film might look dated to modern eyes, it has all the wonderful elements one would come to expect from the Golden Age of Science Fiction.

Robert Wise, the man who gave us West Side Story, The Sound of Music, and Star Trek: The Motion Picture directed the film. Edmund H. North based the screenplay on Harry Bates’ 1940 science fiction short story titled Farewell to the Master.

The film stars British actor, Michael Rennie, who plays the alien visitor, Klaatu alongside Patricia Neal as Helen Benson, and Hugh Marlowe as Tom Stevens. Sam Jaffe, of Gunga Din fame, plays Professor Barnhardt. For our eagle-eyed viewers out there, if you look closely, you will catch Frances Bavier, TV’s Aunt Bee on The Andy Griffith Show, in a small part.

The Day the Earth Stood Still has a common Cold War era theme about the dangers of nuclear armament. The film begins with a flying saucer landing in Washington, D.C., and of course the Army surrounds it to protect the public. In typical “I come in peace” fashion, Klaatu greets the nervous people who promptly shoot him. After he recovers, Klaatu escapes from authorities to blend in with the people until he can formulate a plan to deliver his message to all the people of Earth at once. Of course, things don’t go as planned, but Klaatu does manage to give a warning to Earth right before he returns to space. Humanity can either live in peace, or pursue their present course of creating nuclear weapons; facing obliteration.

The special effects of the film can look dated. For instance, people point in the air at the flying saucer, but their line of sight nowhere matches the actual UFO flight path, and Gort looks like foam rubber and moves too slowly to seem menacing, but the overall look of the movie holds up against those few short comings.

Frank Lloyd Wright was involved with the design of the spacecraft, and its interior was molded after his Johnson Wax Headquarters. The best CGI today would be hard pressed to beat Wright’s design genius.

Although this is science fiction, the technology is pretty limited, and the focus is on story which is what helps the movie endure the ages. In essence, this is a retelling of sorts of the story of Jesus with Klaatu the metaphor for him. You see it in little things, such as when Klatu escapes from the hospital, and he takes the uniform of Major Carpenter; carpentry being Jesus’ trade. When in public, Klatu calls himself John Carpenter whose initials are JC, and finally he too is killed by the governing authorities and resurrected; giving one last message to the people before returning to the heavens.

This film is a perfect blend of science fiction, religion, and contemporary politics that is as potent today as it was nearly 70 years ago. The outdated special effects are minor, and won’t take you out of the story. The relationship between Klatu and the little boy, Billy, foreshadows hope for the future, and the film ends with notion that a peaceful future is possible, but only we can make it happen.

The Day the Earth Stood Still is one of the best examples of 1950s fiction, and a must see, but do yourself a favor, and avoid Keanu Reeves’s 2008 remake of the same name. Klaatu barada nikto!

The Day the Earth Stood Still Review by Chris Haley

An alien named Klaatu lands on Earth, and tells everyone to live peacefully or be destroyed.