When five college students head off to a remote cabin for a quiet vacation, they find a book and audio tape that unleashes pure evil once their incantations are read out loud. In quick time, these kids find themselves helpless to stop the evil as it consumes them one by one. Eventually, there will be only one survivor left among the evil dead, and they hope to stay alive until morning. 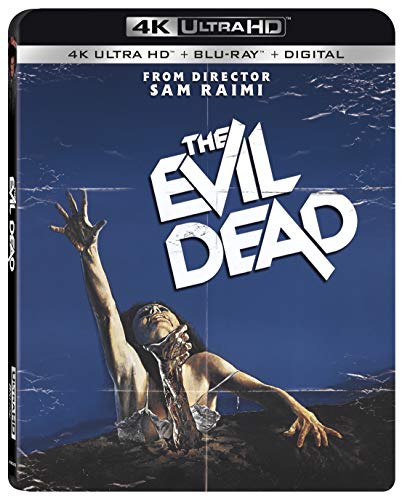 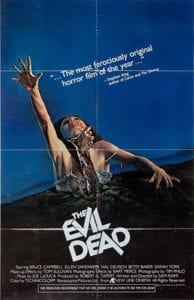 In The Evil Dead, they are young, good looking, and ready for a weekend of good old fashioned underage boozing and unprotected teenage sex in an abandoned cabin in the woods. No, not THAT cabin in the woods. This was long before Chris Hemsworth’s cabin. This was well before SAW. Even before that horrible Texas Chainsaw Massacre remake. Freddy Krueger hadn’t even sharpened his nails before this movie came out. We’re talking about the granddaddy of all gore-fests!

Driving an old beater of a car that barely survives the drive up the highway, but ends up surviving two additional sequels and a trip to the 14th century, these five fun-loving teens race through Deliverance to their five-star resort destination in rural Tennessee. Driving across the bridge Indiana Jones chopped in half in Temple of Doom, they have arrived JUST as the sun is setting. Suspecting the place may have a sinister past, the kids unpack the booze and nightgowns and get straight to partying!

They find a creepy trap door in the middle of the living room with a chain on it. Instead of locking the chain permanently, and getting the hell outta Dodge, they let the biggest male prankster take the only flashlight and disappear down into the darkness. Of course, Ash “the chin” Campbell has to go down by himself to find the missing lad. After being spooked to within a whisker of soiling himself by his best buddy, they come across the Necronomicon dressed as a pile of used toilet paper. Sitting next to the evil find are jars of moonshine, a tape recorder with all the answers, and a 12-gauge shotgun with a boxful of shells (no spoiler alert here!).

The kids immediately sit in a circle and play the eerie tape with the Book of the Dead within inches of the fire. The tape just so happens to have every explanation and ancient incantation no human being has ever seen or heard for the last thousand years. But it stirs something evil outside that begins knocking over trees because of the overpopulation of Pine and Maple trees in the region…

Instead of sitting in the middle of the cabin as a strong unit of five warriors with garlic necklaces, an axe, a chainsaw, and the .12 gauge between them, the kids do what comes natural to all kids who are faced with life-threatening danger…they separate into individual rooms and get undressed! It’s like watching that Geico commercial all over again.

One girl hears something evil in the pitch black outside the cabin and naturally goes out, ALONE, and ventures deep into the woods by herself. Where she is summarily raped by the entire forest. I think she was planning her first born to be named Bud. She runs back to the cabin screaming the entire way but, of course, nobody can hear her through the single-pane glass that they are standing next to. She tries to get her brother Ash to drive her into town, but the bridge has been destroyed by dynamite that nobody heard from 100 yards away.

Unfortunately, the Evil gave birth to Bud inside her. As the other kids run around trying to get away from the Deadite girl by of course running outside where the Evil is actually lurking, they too are possessed one-by-one, except for Ash who spends more time giving the Deadites some chin music with his fists and having bookcases fall on his head. He fires his shotgun at Deadite after Deadite only to find that there are no Medieval Screwheads who want to bow down to his BoomStick!

Over the course of the rest of the evening’s festivities of blood, ooze and exploding white puss all over the cabin, we have: one Deadite chained in the basement that rots into a pile of claymation, another is chopped into a million pieces in the living room with an axe, another laughs like an annoying hyena before being decapitated mercifully (for the audience) with a shovel, another dies then lives then dies again before melting into a pile of goo, and the Necronomicon is burned to within an inch of it’s evil life. All because some asshole who should have known better than anyone to NOT QUOTE THE EXACT WORDS THAT BRING EVIL BACK FROM THE BOOK OF THE DEAD.

In the end, the sun has finally risen, and they vanquish The Deadites. Ash has survived by his chinny-chin-chin. And when all is right with the world, someone immediately attacks Ash, and throws him into the sequel…