The Expendables are reunited when Mr. Church enlists them to take on a seemingly simple job. When things go wrong, the Expendables are compelled to seek revenge in hostile territory, where the odds are stacked against them. Hell-bent on payback, the crew cuts a swath of destruction through opposing forces, wreaking havoc and shutting down an unexpected threat in the nick of time – five tons of weapons-grade plutonium, more than enough to change the balance of power in the world. But that’s nothing compared to the justice they serve against the villainous adversary they seek revenge from. (Courtesy of Lionsgate) 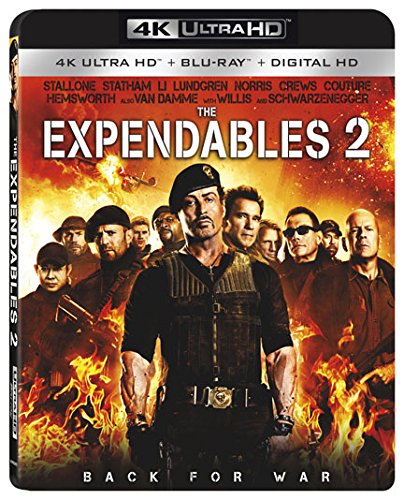 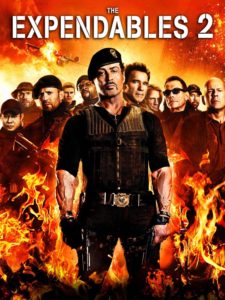 Once back in New Orleans, Billy confesses to Barney that he is considering retiring at the end of the month to live with his girlfriend Sophia (Nikolette Noel). A brief time later, Barney is contacted by CIA operative Mr. Church (Bruce Willis). Church believes that Barney and his team owe him a favor after they destroyed the CIA operation in the last film. Church threatens to kill or arrest the Expendables, forcing Barney to square the books with the CIA operative. Church asks Barney to lead his team to retrieve an item from a downed airplane in Albania. Church orders Barney to take technical expert Maggie Chan (Yu Nan) along as part of his team.

In Albania, the Expendables successfully retrieve the item with minimal effort. However, they are ambushed by a terrorist group known as the Sangs who are lead by arms dealer Jean Vilain (Jean-Claude Van Damme) as they attempt to the leave the country. Vilain is accompanied by his lead henchman Hector (Scott Adkins). Vilain captures Billy and demands the item in exchange for Billy’s life. Barney orders his team to turn over the item. However, Vilain still kills Billy by roundhouse kicking a knife through Billy’s heart. Vilain flees in a helicopter while Barney recovers a note for Sophia from Billy’s pocket. The Expendables bury their friend and swear vengeance on Vilain.

That’s how we deal with death. We can’t change what it is, so we keep it light until it’s time to get dark. And then we get pitch black. Barney Ross (Sylvester Stallone)

While flying back to New Orleans, Maggie informs the team that the item is a computer that details the location of five tons of refined plutonium abandoned in a mine by the Soviet Union after the end of the Cold War. Maggie theorizes that Vilain intends to find the plutonium so that he may sell it to the highest bidding terrorist groups. The Expendables track the weak signal from the computer and follow Vilain to Bulgaria. Once in Bulgaria, the Expendables stay overnight at an abandoned Russian military base while Christmas attempts to find them appropriate transportation. The next morning, the Expendables are ambushed by the Sangs and their tank. The Expendables run out of ammunition and are about to be killed when they are unexpectedly saved by Barney’s old friend, Booker (Chuck Norris). Booker destroys the tank and kills the Sangs. Booker informs Barney that there is a village nearby that opposes Vilain’s men before the mercenary leaves Barney and his group to their mission. Christmas returns a short time later. At the same time, Hector and Vilain locate and dig out the plutonium. They begin collecting it and preparing it for transport.

Fortunately, Church and Trench arrive and free the Expendables and the villagers. The Expendables join Church and Trench in pursuing Vilain. The group intercepts Vilain and his men at a nearby airport as the arms dealer prepares to leave. Booker rejoins Barney’s team, and they all engage the Sang forces in combat. During the skirmish, Christmas decapitates Hector. Barney and Vilain fight each other one on one. Barney beats Vilain and stabs him in the chest with a knife, similar to Billy’s death.

After the battle, Church thanks Barney and his team for their assistance and gives Barney an old biplane to replace the Expendables’ crashed plane. Church, Booker, Maggie, and Trench depart, and the Expendables leave in their new plane. They toast the departed Billy along the way. In France, Sophia discovers a box on her doorstep with a large amount of money and Billy’s letter.