The film that brings many action stars together for the first time. Barney Ross is a highly skilled mercenary that leads a team of soldiers for hire called the Expendables. The team is approached by a secret CIA operative to help take down a dictatorship in the small island country of Vilena. Ross and his second in command, Lee Christmas, scout the mission, but find it too risky. However, Ross’ conscious causes him to reconsider and soon the team is taking on an army of trained soldiers in a suicide mission that may finally show how expendable Ross’ men are. 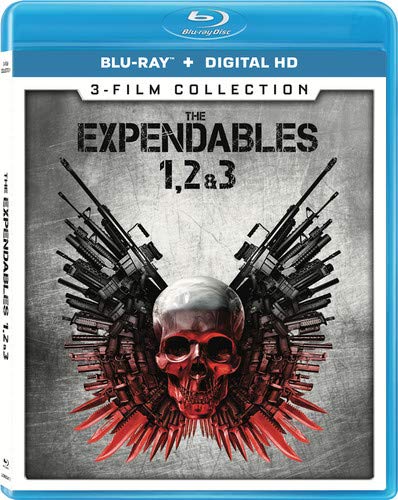 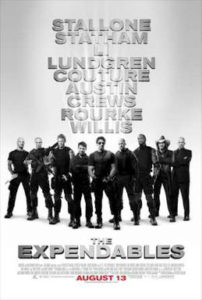 Barney Ross (Sylvester Stallone) leads a group of mercenaries based in New Orleans known as the Expendables. The team consists of Ross, his second in command Lee Christmas (Jason Statham), martial artist Yin Yang (Jet Li), weapons specialist Hale Caesar (Terry Crews), military veteran Gunner Jensen (Dolph Lundgren), and demolitions expert Toll Road (Randy Couture). As the film opens, the team is deployed to the Gulf of Aden to save a group of hostages trapped at sea on a ship controlled by Somali pirates. The Expendables take out the pirates and save the hostages. However, Gunner becomes unhinged and tries to hang a pirate. Yang stops him and tells them that is not what they do. However, Ross kicks him off the team due to his unstable behavior and substance abuse issues.

Once back in New Orleans, Christmas visits his girlfriend Lacy (Charisma Carpenter) and finds that she has left him for another man. Ross visits his friend and former Expendable, Tool (Mickey Rourke), at Tool’s tattoo parlor. The two talk about the old days until Christmas arrives and commiserates with the two older soldiers over his romantic woes. Not long after, Ross attends a meeting with a mysterious CIA operative known only as “Mr. Church” (Bruce Willis). Church is attempting to recruit Ross or Ross’ competitor, Trench Mauser (Arnold Schwarzenegger), to take on an assignment to overthrown dictator General Garza (David Zayas) in the small island country of Vilena. Trench passes on the job, but Ross agrees to consider the job after he scouts the mission.

A few days later, Ross and Christmas fly to Vilena in Ross’ amphibious plane. They infiltrate the island and meet their contact, Sandra (Giselle Itié). Sandra informs them that General Garza is her father, who has been misguided by an ex-CIA officer, James Munroe (Eric Roberts), who is helping Garza stay in power as a figurehead for Munroe’s own drug profiteering operations. Munroe is assisted by a ruthless mercenary, Dan Paine (“Stone Cold” Steve Austin), who has trained most of Garza’s military. Garza’s men attempt to arrest Ross, Christmas, and Sandra after they are caught observing the drug operations. Ross and Christmas kill their alleged captors, but when they escape the island, Sandra decides to stay and is arrested by Munroe’s men.

Unbeknownst to Ross and Christmas, Jensen hid aboard the plane and stayed on Vilena when his former partners escaped. Jensen approaches Munroe and Garza and provides them with information as to Ross and Christmas’ identities, including where they are located in New Orleans. Jensen agrees to lead some of Munroe’s men to attack Ross’ team back in New Orleans. Meanwhile, Munroe has his men begin to torture Sandra for information, which upsets Garza and draws a wedge between him and Munroe.

We are the shadows and the smoke, we rise. We are the ghosts that hide in the night. Barney Ross (Sylvester Stallone)

Back in New Orleans, Christmas learns that Lacy has been physically abused by her new boyfriend. Christmas assaults the man and his friends and warns the batterer to stay away from Lacy. The fight reveals Christmas’ occupation to Lacy, who once again becomes involved with Christmas. At the same time, Ross discovers that Church is a CIA operative and that the real target of the Vilena assignment is Munroe. Ross also learns that Munroe has gone rogue and joined forces with Garza to keep the drug money that funds the CIA for himself. Ross also learns from Church that the CIA cannot send an assassin team to take out Munroe because of the bad publicity.

Ross is torn. He believes the assignment is too risky but feels guilty for leaving Sandra in the hands of Munroe on the island. He talks to Tool about his feelings. The tattoo artist makes a confession about letting a woman commit suicide instead of saving her in one of his final missions, a decision that still haunts Tool to this day. The conversation motivates Ross to go back to Vilena for Sandra alone. Yang becomes aware of his plan and joins Ross.

However, the two men are attacked by Jensen and Munroe’s men on the road to the airport. The ambush ends in an abandoned warehouse where Yang and Jensen fight for a second time. Ross shoots Jensen when he tries to impale Yang on a pipe. Believing that he is dying, Jensen makes amends with Ross and provides intelligence on the layout of Garza’s palace.

Ross and Yang proceed to the plane and find the remaining members of the Expendables waiting for them. The entire team flies to Vilena and infiltrates Garza’s compound. Garza believes that Munroe has sent Ross’ men to kill them and orders his men to kill the invading Americans. Ross’ team plants explosives throughout the palace and the compound. Ross is captured by Paine and his men while trying to save Sandra. The rest of Ross’ team arrives and saves Ross, but they become pinned down by Garza’s men.

Meanwhile, Garza finally stands up to Munroe and orders the former CIA operative out of Vilena and returns his money. Munroe kills Garza and attempts to escape with Paine and Sandra. Ross’ team detonates the explosives, causing a distraction that allows them to escape being pinned down. Toll kills Paine by burning him alive while Ross and Caesar manage to destroy the helicopter before Munroe can escape the island. Ross and Christmas catch up to Munroe. They kill the former spy and save Sandra. In the aftermath, Ross gives his mission reward to Sandra to help her in restoring Vilena to a beautiful island paradise.

The film ends with the team spending time together at Tool’s tattoo parlor celebrating a successful mission. Jensen, injured but alive, celebrates with his friends who accept him back as one of the team. Christmas and Tool play a game of knife throwing. Christmas composes a mocking poem about Tool before throwing the final knife from outside the building into the bullseye.