The Fantastic Four begins as an experimental space voyage goes awry. Four people are forever changed by cosmic rays: Reed Richards, inventor and leader of the group gains the ability to stretch his body and takes the name Mr. Fantastic. His girlfriend, Sue Storm, gains the ability to turn invisible and create force fields becoming The Invisible Woman. Her little brother, Johnny Storm, becomes The Human Torch with the ability to control fire, including covering his own body with flame. The pilot Ben Grimm is turned into the super-strong, super-tough Thing. Together they become a team of super-heroes and use their unique powers to foil the evil plans of villains, such as the arch-enemy Doctor Doom. 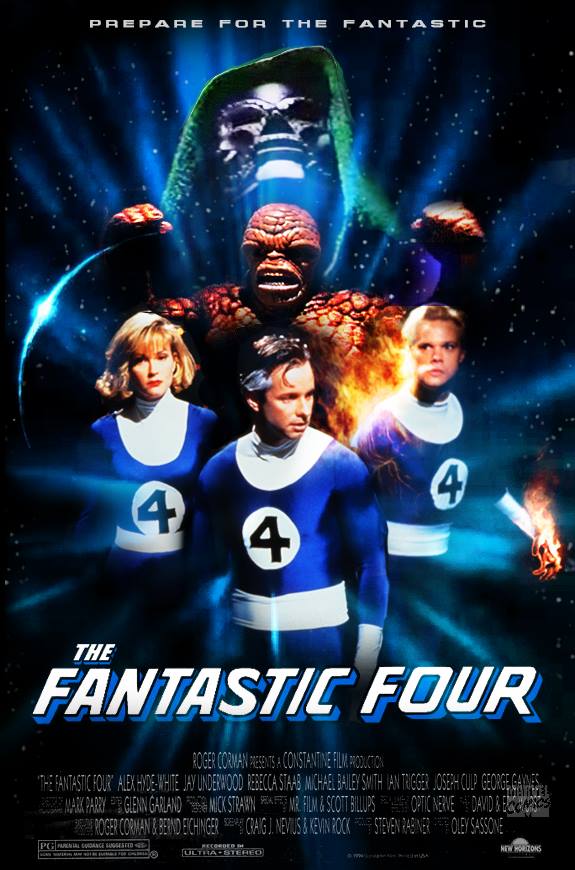 In The Fantastic Four, Reed Richards (Alex Hyde-White), Ben Grimm (Michael Bailey Smith), and Victor Von Doom (Joseph Culp) are classmate in college. Reed and Victor are working on an experiment together that involves a passing comet named Collosus. Reed rents a room from May Storm (Annie Gagen) who lives with her two children, Sue and Johnny (Mercedes McNab and Phillip Van Dyke). Sue has a secret crush on the much older Reed.

One night, Reed and Victor conduct their experiment. Reed expresses his concerns about some of Victor’s calculations, but the arrogant Victor expresses confidence in his own work and presses forward. However, the experiment goes wrong. Reed urges Victor to leave the machine, but Victor refuses to fail and continues on. Ben bursts into the lab and saves Reed. An intense burst of energy erupts from the machine and scars Victor horribly. At the hospital, Reed is told by the doctor that Victor died from his injuries. However, Victor is still alive and some mysterious doctors begin working on him.

Ten years later, Reed and Ben are planning on flying an experimental spacecraft to examine Colossus as the comet passes by Earth again. Reed still carries the guilt for Victor’s “death” with him and wants to complete the experiment that they began together ten years before. The pair begin to recruit a crew for the spacecraft. They visit the now adult Sue and Johnny Storm (Rebecca Staub and Jay Underwood) who agree to join the crew although they have no scientific background. Prior to their flight, Ben meets the blind artist Alicia Masters (Kat Green) and the two take an interest in each other.

Reed’s spacecraft requires a specialized diamond for the spacecraft to work. The diamond helps protect the crew from the cosmic rays. However, the diamond is stolen by a thief known as the Jeweler (Ian Trigger) and replaced by an imitation. Meanwhile, Victor, now known as Doctor Doom, monitors Reed’s experiment and intends to sabotage it in the hopes that it will kill his old friend.

The spacecraft is launched into orbit and they approach the comet. However, the foursome is hit by cosmic rays as they try to absorb energy from the comet. They crash land back on Earth and discover that the cosmic rays have altered each of them and given them extraordinary powers. Reed’s body has become elastic and stretches to inhuman lengths. Sue gains the ability to turn her body invisible. Johnny can generate fire around his body. However, Ben suffers the most dramatic transformation as his entire body turns into orange rock-like skin. Ben (Carl Ciarfalio) is devastated by his transformation but Reed promises to help him.

The foursome are stranded in the middle of nowhere. Doom is frustrated that Reed and the others survived and sends his men out to find them. Doom’s men find the stranded astronauts and impersonate United States Marines and capture Reed’s team. Doom’s doctors examine each of the transformed team members. Doom formulates a plan to extract their abilities and place them into his own body. Doom theorizes that he will have a need for the real diamond and sends his men to contact the Jeweler to acquire it. Reed and his crew become frustrated with their captivity at Doom’s facility. They overpower their doctors and escape from Doom’s imprisonment. During their escape, they encounter Doom and a giant laser designed for unknown purposes. The team regroups at the Baxter Building and tries to decide what they are going to do with their powers. Ben leaves the group, feeling that he has become a freak.

Back at the Baxter Building, Sue makes costumes for the team and dubs the group the Fantastic Four even though Ben is not among them. Reed is able to determine that Victor is alive due to Doom’s knowledge of Reed’s experiment. In the Jeweler’s lair, Alicia refuses to marry the Jeweler. Doom arrives at the Jeweler’s lair to acquire the diamond. The metallic villain easily overpowers all of the Jeweler’s men. Doom seizes the diamond and threatens to kill Alicia. Ben arrives and tries to rescue Alicia, who confesses her love for him which causes Ben to revert to his human form. Ben runs away before either Doom or the Jeweler’s men can kill him. Once safe, his frustration causes him to revert back to his rocky form.

Doom contacts Reed at the Baxter Building and threatens to destroy New York now that he has the diamond. He also informs them that he is holding Alicia captive. The foursome agree to form a team, and Sue confesses her love for Reed. Reed takes the name Mr. Fantastic, Ben becomes the Thing, Sue calls herself the Invisible Woman, and Johnny takes the moniker of the Human Torch. The Fantastic Four travel to Doom’s lair in Latveria. Doom captures them and intends to siphon out their powers. Reed is able to use his stretching ability to release the team from captivity and stop the transformation machine. The FF fight Doom’s men and easily handle them. The Human Torch stops the laser from destroying New York.

The Thing frees Alicia Masters from her captivity and introduces himself to her. She appears to not care about his rocky surface and to still care for him. Mr. Fantastic and Doom have a final battle, which ends with Doom appearing to commit suicide by letting himself fall into a deep chasm leaving Reed with his mechanical glove. After leaving the glove on top of Doom’s castle, the glove begins to move on its own once Reed leaves signifying that Doom lives.
The film ends with the wedding of Reed and Sue, with Sue dressed in a wedding dress and Reed in his Fantastic Four outfit.