John Carpenter returns to horror after his hit smash Halloween. In the small town of Antonio Bay, California, the inhabitants prepare to celebrate the 100th anniversary of the town. Unfortunately, the town has dark origins which are coming back to haunt the modern-day inhabitants. As a mysterious, unexplainable fog rolls in, ghostly forms begin to emerge and kill people in the town and at sea. Only the town’s priest may have the answer as to what will satisfy the vengeance of the ghostly sailors from the fog. 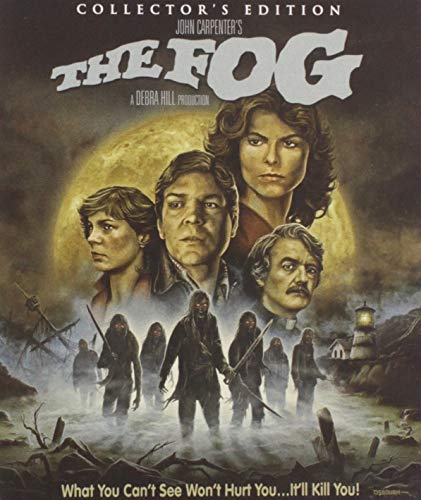 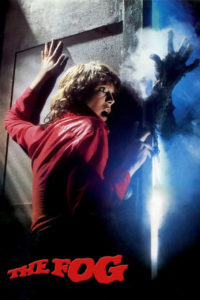 Antonio Bay, California is about to celebrate its 100th anniversary of inception in 1980. The night before the celebration, bizarre paranormal activity begins occurring at midnight. Electricity surges everywhere, and the town priest, Father Malone (Hal Holbrook), finds his grandfather’s diary in the church after a piece of masonry falls from the wall revealing a hidden nook. Malone reads the diary and learns that his grandfather along with the other five founders of Antonio Bay deliberately sank a clipper ship named the Elizabeth Dane so that the wealthy owner of the ship, Captain Blake (Rob Bottin), could not establish a leper colony nearby. The six founders also stole gold from the lepers which they used to fund Antonio Bay.

At the same time, three fishermen drinking in their boat of the coast are enveloped by a strange, glowing fog. Hidden in the fog is the Elizabeth Dane and its ghostly crew. The Dane’s crew boards the fishermen’s trawler and kills the three fishermen. Meanwhile, town resident Nick Castle (Tom Atkins) picks up a beautiful hitchhiker named Elizabeth Solley (Jamie Lee Curtis) who is passing through town. As they drive towards Antonio Bay, all the truck’s windows mysteriously shatter. The pair is so disturbed by the incident, they go to Nick’s house and have sex.

The next morning, local nighttime disc jockey and single parent Stevie Wayne (Adrienne Barbeau) is given a piece of driftwood with the word DANE inscribed in it by her young son Andy (Ty Mitchell). Andy tells her that he found it on the beach after a gold coin disappeared in the surf. Stevie takes the driftwood with her to work at the lighthouse where she broadcasts her radio show. She sets the wood down next to a tape player that is playing. The wood begins to seep water and causes the tape player to short circuit. A mysterious man’s voice emerges from the tape player swearing revenge and stating that the six must die. At the conclusion of the message, the wood bursts into flames which Stevie puts out with a fire extinguisher. Afterwards, the tape player begins working normally again.

There’s something in the fog! Stevie Wayne (Adrienne Barbeau)

In the meantime, Nick is informed of the missing fishing trawler. He and Elizabeth go out to sea looking for the boat and find it in an extremely rusty condition, as if it had been at sea for months. They also find the body of one of the fishermen, Dick Baxter (James Canning) with his eyes gouged out. The other two fishermen are missing, including the husband of Kathy Williams (Janet Leigh). Kathy oversees the centennial celebration for the town.

Once back on shore, Nick has the body examined by coroner Dr. Phibes (Darwin Joston) who tells Nick that the condition of the body implies that it has been underwater for several weeks. While Nick talks with the coroner, Dick’s body gets off the table and slowly approaches an unaware Elizabeth before suddenly collapsing. Elizabeth screams and Nick rushes into the room. He and Elizabeth find that the corpse has carved the number three into the floor.

Later that evening, local meteorologist Dan O’Bannon (Charles Cyphers) calls Stevie at the radio station to inform her that another fog bank is moving towards the town. While they are talking, the fog bank rolls in around the weather station and Dan hears a knock at the door. Dan answers the door and is killed by the ghostly Dane crew as Stevie listens. In town, the centennial celebration proceeds despite the weather. As the fog rolls in, the town loses telephone and power lines. A panicked Stevie uses a backup generator to restore her power. She broadcasts to the town for someone to go to her house and save her son as she watches the fog envelope the town. Nick and Elizabeth hear her broadcast and proceed to Stevie’s house. Meanwhile, as the fog surrounds Stevie’s house, Andy’s babysitter, Mrs. Kobritz (Regina Waldon), is killed by the Dane crew. The ghosts attempt to break down Andy’s bedroom door to kill the young boy, but Nick arrives and saves Andy.

Over the radio, Stevie advises everyone to head to the town’s church. Kathy and her assistant Sandy Fadel (Nancy Loomis) hear the broadcast and proceed there. Nick, Elizabeth, and Andy also arrive at the church just as the fog begins to surround the building. Father Malone takes everyone to a back room where he found his grandfather’s diary. Father Malone and Nick tear down the wall with the nook and discover a solid gold cross, presumedly made from some of the stolen gold. The Dane crew attempts to break into the room through the windows. Malone takes the cross into the chapel where he confronts Blake and his crew. Malone offers the gold and himself in exchange for the lives of everyone inside the church. Meanwhile, Stevie is pursued to the top of the lighthouse by other Dane ghosts who continue to close in.

Back at the church, Blake takes the gold cross which begins to glow. Nick pulls Malone away from the cross mere seconds before it disappears in a blinding light along with Blake and the rest of his crew. At the lighthouse, the Dane crew also mysteriously disappear leaving Stevie alive. A short time later, Elizabeth, Nick, Andy, Kathy, and Sandy leave the church and Malone wonders why he was spared by Blake given that there were only five deaths. He discovers his answer a few moments later when the fog suddenly reappears inside the church with Blake and his men. Blake decapitates Malone as the screen cuts to black.