The French Dispatch brings to life a collection of stories from the final issue of an American magazine published in a fictional 20th-century French city. 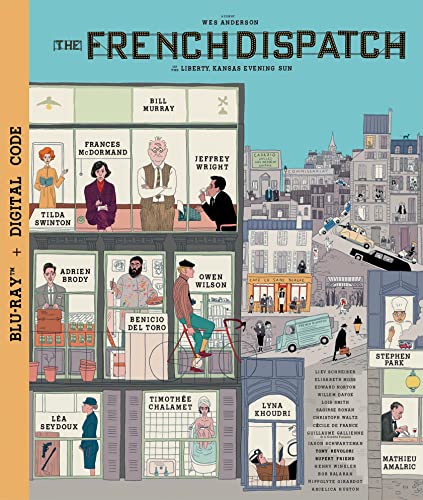 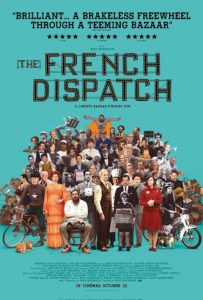 When newspaper editor Arthur Howitzer Jr. (Bill Murray) dies alone from a sudden heart attack, his will stipulates that his publication, The French Dispatch of the Liberty, Kansas Evening Sun, immediately shut down following one final issue. The issue comprises a tour of the town of Ennui-sur-Blasé where the publication operates, a republication of three select articles from past editions, and Howitzer Jr’s obituary.

The Cycling Reporter by Herbsaint Sazerac

Herbsaint Sazerac (Owen Wilson) gives us a tour of the town of Ennui-sur-Blasé on the back of a bicycle. He takes us to the local arcade, the Le Sans Blague café, and a pick-pocket’s alleyway. He compares the past and the future of each place and we see that the more things change, the more things stay the same.

The Concrete Masterpiece by J.K.L. Berensen

J.K.L. Berensen (Tilda Swinton) delivers her story via a lecture about the career of painter Moses Rosenthaler (Benicio del Toro) at the art gallery of her former employer, Upshur “Maw” Clampette (Lois Smith). Moses is a mentally disturbed artist serving a life sentence in Ennui’s prison for beheading two bartenders. After a decade in the slammer, Moses has returned to painting—all abstract nudes of his muse, Simone (Léa Seydoux). She’s a guard in the prison and the two have developed something of a Salvador Dali / Gala relationship.

Also in the prison is Julien Cadazio (Adrien Brody). He’s an art dealer serving a sentence for tax evasion. When he comes across Moses’ painting, he offers to buy it. Moses says no, but Simone nods to him to sell it and he does. Once Julien serves his sentence, he convinces his uncles, Nick (Bob Balaban) and Joe (Henry Winkler), to display the painting in their art exhibit. Soon, Moses is the break out artist of the art world. However, back in his cell, he struggles for inspiration. Simone convinces him to continue painting.

Three years pass and Julien and his uncles return to the prison to let Moses know their frustrations over his lack of painting, and order him to complete his work. Soon, the three bribe all the guards in the prison to bring in various people from the art world to see those latest creations. One there, Julien is beside himself when he learns Moses has created a series of frescoes in the concrete wall in the prison’s hall.

Angry that the paintings are irremovable from the prison, Julien gets into a little spat with Moses, but has a change of heart when Maw offers to buy the frescos anyhow. She later arranges for the entire room to be airlifted out of the prison and into her private museum in Kansas. However, the prison’s prisoners riot when Julien refuses to bribe them like he did the guards. Moses is able to put down the riot.

The next day, Simone leaves the prison for good using her bribe money and reunites with her daughter. However she maintains contact with Moses as the years pass. The prison eventually awards Moses for helping with the riot when they grant him probation.

Revisions to a Manifesto by Lucinda Krementz

Lucinda Krementz (Frances McDormand) delivers her report on a student protest that’s broken out on the streets of Ennui. It begins with the town’s boys protesting access to the girls’ dormitory. They’ve recently been inspired to action in the name of their friend, Mitch-Mitch (Mohamed Belhadjine) after the military drafted him.

Initially, Krementz maintains her journalistic neutrality, but she tosses that out the window when she begins an affair with the movement’s leader, Zeffirelli (Timothée Chalamet). She edits (rewrites) his manifesto and adds an appendix for him to remove the poetic license he’s given it.

As the protest evolves into the Chessboard Revolution, both the male and female student protestors find themselves surrounded in the town’s main plaza. While Zeffirelli plays chess with Ennui’s mayor (Gilles Gaston-Dreyfus)—Zeffirelli from the plaza and the mayor from his office—the protestors read Zeffirelli’s manifesto.

Juliette (Lyna Khoudri), the female protestor’s leader, hates it. She argues with Zeffirelli over its contents. This distracts him long enough for time to run out his turn in the chess match and the mayor declares victory on a technical checkmate. He orders the police to raid the plaza and arrest everyone. As the cops move in, Krementz tells Zeffirelli and Juliette to go make love. Zeffirelli hops on the back of Juilette’s motorcycle and they ride off to her dorm for some sweet, sweet love making.

A few weeks pass and we find Zeffirelli and Juliette with some friends at their pirate radio station. As Zeffirelli is about to deliver his new manifesto over the airwaves, the antennae shorts out. He climbs the tower to repair it but it shorts out again. The electric discharge kills Zeffirelli instantly. Soon thereafter, a photograph of his likeness becomes a symbol of the movement… and a kick ass t-shirt.

The Private Dining Room of the Police Commissioner by Roebuck Wright

The kidnappers work for the warring criminal syndicates of Ennui. They demand the Commissaire release their accountant, Albert (Willem Dafoe)—aka the Abacus. He controls the syndicate’s shared financial records, and the police have him locked up in a solitary confinement cell at their headquarters.

Wright knows this cell all too well after the police arrested him and tossed him in it for being a homosexual. The only reason he was able to get out of jail was because he called the only phone number he had in the town which was Arthur Howitzer Jr’s. Howitzer bailed out Wright after a brief job interview in his cell and offered him a job at the Dispatch.

Eventually, the police surround the kidnapper’s hideout, and a gun fight erupts. Gigi uses the chaos and his knowledge of Morse code to sneak out a message asking his father to “send the cook”. Lt. Nescaffier goes to the kidnappers’ hideout and cooks everyone a poisoned meal. The gang only eats it after Nescaffier eats some to prove the food’s safe. The criminals heartily eat and quickly die from poisoning. Nescaffier barely survives thanks to a strong constitution and a police injection.

Unfortunately, The Chauffeur escapes with Gigi because the meal has radishes in it and both he and Gigi hate radishes. After a very animated chase, Gigi escapes out of the car’s sunroof and reunites with his father as they crash through the moving police car’s windshield. During his recovery, Nescaffier cooks The Abacus an omelette because the police accidentally starved him Thursday through Sunday due to the kidnapping.

Back at the Dispatch’s office, Howitzer feels the story about the chef isn’t really about the chef, which is what he asked for. Wright gives him a deleted segment he took out because it made him sad—Nescaffier recounting to Wright that the taste of the poison was unlike anything he had ever eaten before. The two men also commiserate over being foreigners in France. Howitzer tells Wright to add that part back to the story, and although Wright disagrees, he does as he was requested to do.

Obituary by the French Dispatch Staff

In an epilogue, the French Dispatch staff mourn Howitzer’s death, share his birthday cake, and work together to create the final issue in honor of his memory—no crying allowed.