Mickey Pearson is an American expatriate who has created a vast high end drug dealing business in the United Kingdom. Mickey is looking to retire and tries to sell off his highly profitable marijuana empire in London. However, Mickey discovers that trying to get out of the business maybe even more dangerous than building the business. 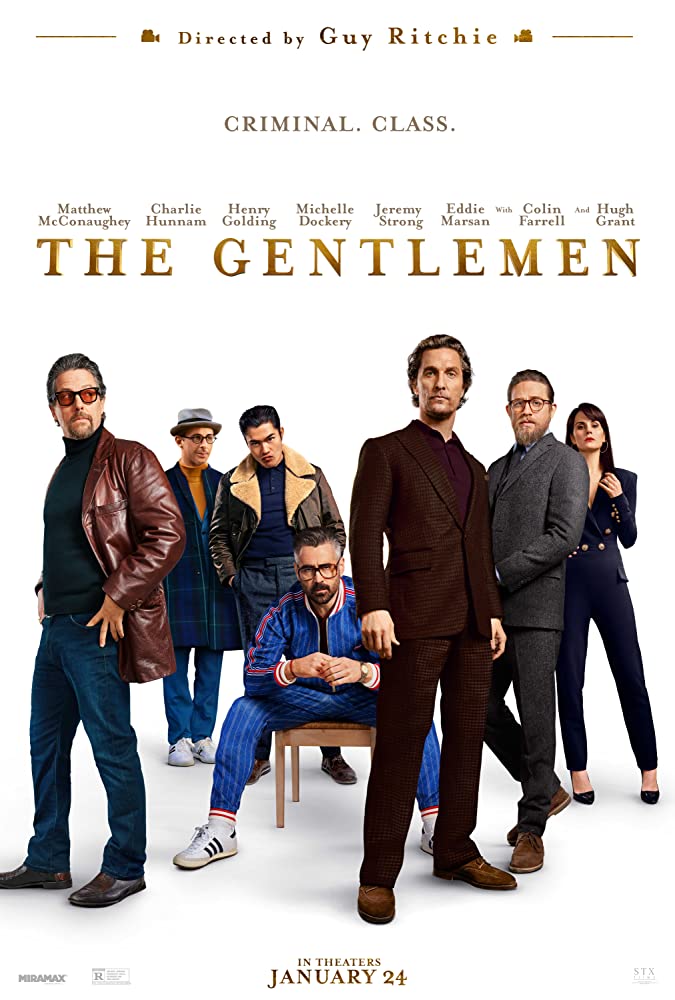 Fletcher completes his investigation, but rather than turn it into Big Dave, he contacts Mickey’s right hand man Raymond Smith (Charlie Hunnam) and offers to sell his material to the drug dealer for $20 million. Fletcher reveals that his investigation has revealed that Mickey is looking to sell his extensive marijuana grow and sales operations for $400 million. He wishes to retire with his wife, Rosalind (Michelle Dockery). Mickey is approached by American billionaire Matthew Berger (Jeremy Strong) who is interested in the business. Mickey reveals that he grows his marijuana under the estates of aristocratic landlords who are paid cash for the upkeep of their stately homes.

Soon after, Mickey is approached by Dry Eye (Henry Golding), an underboss for Chinese gangster Lord George (Tom Wu). Dry Eye tries to intimidate Mickey into selling to him, but Mickey tells the young gangster no. Shortly thereafter, one of Mickey’s underground grow operations is broken into by some aspiring YouTubers named The Toddlers. The Toddlers steal thousands of dollars in marijuana and take it back to their boxing gym, which is owned by Coach (Colin Farrell). Coach orders his trainees to delete their video of the robbery off the internet and begins to seek out the owner of the marijuana. He is dismayed when he finds out that the marijuana belongs to Mickey.

Mickey begins moving all of his product out of the production locations as a precautionary measure. He also begins to investigate who is responsible for the robbery. While he is investigating, he agrees to help Lord Pressfield retrieve his missing daughter Laura. Mickey sends Raymond and some men to retrieve Laura from a drug den in a bad area of town. One of the other druggies attacks Raymond’s men during the retrieval and is knocked out of a window by accident, falling several stories to his death. The dead man, Aslan (Danny Griffin), is the son of a wealthy Russian gangster. Raymond covers up the death of Aslan, although Fletcher photographs the entire incident and turns the information over to the Russian gangster.

Coach visits Raymond and apologizes for his trainee’s slight against Mickey. He offers his services to Raymond to make it up to Mickey. He also turns over a henchman of Dry Eye’s, Phuc (Jason Wong), who was the person who sent the Toddlers to Mickey’s grow facility. Phuc escapes from Raymond and Coach, but jumps over a wall into an oncoming train, killing himself. Once Mickey learns that Dry Eye’s man was the one responsible for the robbery, Mickey visits Lord George and threatens to kill him for going after his lab. He also destroys one of Lord George’s heroin labs in retaliation. In response, Lord George goes to retaliate against Dry Eye for going behind his back, but Dry Eye has Lord George killed instead.

Fletcher reveals to Raymond in his conversation with him, that Dry Eye is working with Berger to drive the price of Mickey’s business down significantly. However, Dry Eye wants the business for himself and after killing Lord George, works against Berger to acquire the business. Dry Eye tries to kidnap Rosalind Pearson, who kills two of Dry Eye’s men. Mickey arrives in time to save his wife and kills Dry Eye.

After this information is conveyed to Raymond, he orders Fletcher to leave his house. Fletcher tells Raymond that Mickey has 72 hours to pay him his money or he will turn the story over to Big Dave. Raymond reveals that he knew much of what Fletcher informed him of. He has Coach and the Toddlers abduct Big Dave. They drug the editor and film him having sex with a pig, which blackmails him into dropping his investigations against Mickey.

At the same time, Mickey meets with Berger at a frozen fish plant, which is Mickey’s European distribution operation. Berger drops his offer to $130 million for Mickey’s business. Mickey reveals that he knows that Berger was the one who stole from his business and involved Dry Eye in his operation. Mickey tells Berger that he will keep the business. He also tells Berger that Berger will pay him $270 million to make amends for hurting his business. Finally, he demands Berger provide him a pound of flesh off his body to make amends for placing Rosalind in danger. Mickey says that if he refuses either term, Berger will be left to die in one of the fish marker freezers.

Nearby, Fletcher approaches Raymond for his payment, but Raymond reveals that he knew Fletcher was tailing them all along. Raymond reveals to Fletcher that they recovered all of his contingency files so that Fletcher doesn’t need to be kept alive. Fletcher reveals that he provided the information to Aslan’s father as well. At that moment, Coach kills two Russian hitmen sent to kill Raymond. Fletcher escapes in the confusion. Mickey is picked up in his own car by two other Russian hitmen. The Toddlers kill the Russian hitmen, thinking that they are helping their Coach. Mickey escapes unharmed.

The film ends with Fletcher trying to sell a screenplay of the film to Miramax Studios. After his meeting, he gets into a cab which is actually being driven by Raymond. At the same time, Mickey and Rosalind return to their business and celebrate.