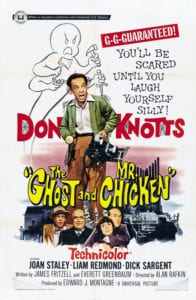 1966’s The Ghost and Mr Chicken is a a murder/mystery/comedy for the whole family. Alan Rafkin directed the film which stars Don Knotts, Joan Staley, Liam Redmond, Dick Sargent, and Skip Homeier to name a few.

The Ghost and Mr Chicken tells the story of Luther Heggs (Knotts) who aspires to be a full-time reporter at the newspaper where he works. He gets his big chance when his editor asks him to spend the night in a haunted mansion on the 20th anniversary of a murder/suicide that took the lives of Mr. Simmons and his wife, and write about it. Things get complicated when the town goes crazy for the story, and when Nicholas Simmons (Philip Ober), the nephew of the victims, tries to tear down the mansion to cover up his part in their deaths.

This is the first of five films Don Knotts collaborated on with Universal Pictures. The others being The Reluctant Astronaut (1967), The Shakiest Gun in the West (1968), The Love God? (1969), and How to Frame a Figg (1971). Known mostly for his role of Barney Fife at this time, which he won five Emmy’s for, Knott’s performance features the qualities that have endeared him to generations of people throughout his career.

He’s a lovable loser that manages to get the girl and save the day, and his comedic touch is top notch here. His speech to the town at a Chamber of Commerce picnic where he’s their guest of honor is not only uncomfortably awkward, but hilariously acted. His performance will leave you rooting for him the whole film.

Joan Staley plays Alma Parker, the attractive woman dating Ollie Weaver (Skip Homeier). Men during that time might have known Joan better as the blond Playboy Playmate from November 1958, but in the mid 60s, she was contracted as an actress to Universal. For this film, the part called for a brunette, so the studio required her wear a wig. It also helped to tone down her overt sexiness as a blond. While her performance doesn’t really standout in this film, she does as well as you’d expect for the role she was given. She and Knotts have a sweet rapport that shows on screen.

Dick Sargent, the second Darren on Bewitched, plays Rachel Courier Express editor, George Beckett. His character teeters between being a jerk towards Luther and being a likable character. Sargent is a great straight man to Knotts as he was to Elizabeth Montgomery.

The two main villains in this film are Ollie Weaver and Nicholas Simmons. Both a bit of the mustache-mustache-twirling baddies, Ollie is more of a bully than a villain. He has the girl Luther would like, and the job too. In the end, Luther gets both from him. Nicholas’s character I would have liked to have had written a bit better towards the end. His scheme to discredit Luther was great, but the execution of the conclusion with him at the end, holding Alma hostage, fell a bit flat for me.

The film itself runs 90 minutes, and was filmed in the Technicolor Corporation’s Techniscope wide screen process which still looks great. You will find many appearances from The Andy Griffith Show actors throughout the film. While The Munsters fans might think the mansion itself lis from that show, it is in fact a similar one next door to it.

The ending confrontation falls a bit flat for me, but Knott’s “my body is a weapon” takedown was both ridiculous and funny, so it that that going for it. The lovable loser gets the girl in this one, and even though it’s a bit unbelievable, Knott’s proves that kindness and charm can win the girl over.

MHM gives Knotts an “Attaboy, Luther!” for saving the day, and gives the film 3.5 stars out of five. Don Knotts fans should add this one to their collection if they don’t already have it.

A typesetter for a small town newspaper pursues his dream of becoming a big-time reporter by spending a night in an alleged haunted house.