The Godfather begins with Don Vito Corleone—the head of the Corleone mafia family in New York. At his daughter’s wedding, Vito’s youngest son (a decorated WWII Marine), Michael attends as well. While he seems quite disinterested in the family’s business, the family business is interested in him. We find that Vito is generous to all those who give him respect, but quite the opposite to those who do not. When a powerful rival decides to sell drugs, he needs the Don’s approval. However, after Vito refuses, a mob war begins which draws Michael into it. He saves his family and the business, but at what cost? 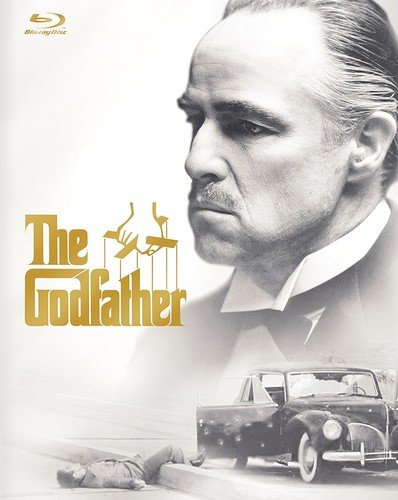 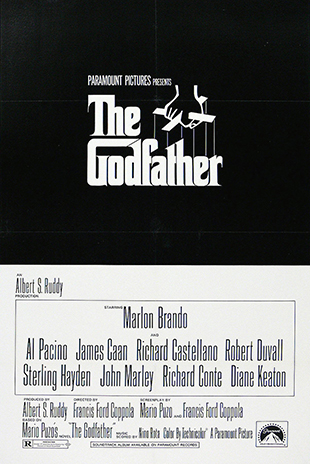 Many elements of the New York underworld attend the wedding, as well as the entire Corleone family, including: Vito’s godson, the famous singer Johnny Fontane (Al Martino), Vito’s United States Marine son, Michael (Al Pacino), and Michael’s new girlfriend Kay (Diane Keaton). Out front, the wedding goes off without a hitch, and the men make a few successful backroom deals too. Michael tells Kay at the wedding some of the dirty family history. He tells her that is his family; not him—assuring her that he wants no part of his father’s criminal enterprise.

The film switches to Hollywood where the Don’s consigliore, Tom Hagen (Robert Duvall), strikes a deal with film studio head Jack Woltz (John Marley) on behalf of Johnny Fontane. Fontane needs a role in an upcoming film to reignite his failing career. Unfortunately, Woltz wants to destroy Fontane because he messed around with a starlet that he had his eye on. Woltz denies Don Corleone’s request for a favor, but little did the filmmaker know that it was one that he couldn’t refuse. Woltz soon wakes up with his prize horse’s decapitated head in his bed. With a lesson learned, he gives Fontane the role.

A drug peddler on the rise known as The Turk (Al Lettieri) wishes to meet with Don Corleone to make his argument for the Don to invest in his criminal enterprise and provide protection. However, Vito disapproves of the drug trade and rejects the offer. Unfortunately, Sonny (James Caan), Vito’s eldest son, shows interest in the deal when he jumps in. Feeling that there is an opportunity for a deal if the Don is out of the picture, the Turk attempts to assassinate Vito.

They shoot Don Corleone several times, but he survives. With the Don now in the hospital, Sonny takes control of the family, and launches into a full scale gang war. Michael returns home to help, abandoning his reservations about becoming involved in the family business. After preventing a second hit on his father at the hospital, Michael volunteers for—and successfully completes—the plan to murder the Turk and a dirty police captain that is in the Turk’s employ. Michael then secretly leaves to Italy in secret to avoid the law and any fallout.

While Michael is in Italy, the Five Families erupt in open warfare, and the family business takes a major hit. Sonny sends his other brother, Fredo (John Cazale), to Las Vegas for shelter, and to learn the casino business from Moe Greene (Alex Rocco). At the same time, Sonny deals with more personal matters at home when his brother in law beats his sister, Connie. Fiery tempered Sonny brutally attacks his brother in law Carlo (Gianni Russo) in the street, threatening to kill him if he ever touches his sister again.

Meanwhile, in Italy, Michael falls in love with local girl, Apollonia (Simonetta Stefanelli), and marries her. However, back at home, when Carlo beats Connie again, and Sonny leaves the safety of the Corleone compound to confront him. At a highway toll booth, a group of men brutally kill him using sub-machine guns. When news of Sonny’s death reaches Italy, Michael’s protector feels that Michael and Apollonia are in danger and wants to move them. Unfortunately, it is too little too late, as a car bomb detonates which kills Apollonia.

Sonny’s death devastates Vito, and he decides to end the gang war. Believing that the Tattaglias were secretly under orders of Don Barzini (Richard Conte), he promises, before the heads of the Five Families, to withdraw his opposition to their heroin business, and forgo revenge for Sonny’s murder. His safety guaranteed, Michael returns home to find his involvement in the family business has his father.

After Michael marries Kay the next year, he assumes command of the family—his father is now content to merely advise his youngest son. Michael promises Kay that he will make the business legitimate within five years. To that end, Michael insists Hagen relocate to Las Vegas, and relinquish his role to Vito. The demotion hurts Tom, but Michael and Vito explain that Tom is not a “wartime consigliore”. He should have no part in what will happen in the coming battles with rival families. When Michael travels to Las Vegas to buy out Greene’s stake in the family’s casinos, Greene derides the Corleones as a fading power. To add injury to insult, Michael sees Fredo falling under Greene’s sway.

The end for Vito

Vito collapses and dies in his garden while playing with Michael’s son, Anthony. At the funeral, Vito’s trusted lieutenant Salvatore Tessio (Abe Vigoda) arranges a meeting between Michael and Don Barzini, signaling to Michael the treachery that Vito had previously warned of. They set the meeting for the same day as the christening of Connie’s son. The film shows as the christening proceeds, Corleone assassins, acting on Michael’s orders, murder the other New York dons and Moe Greene. At the same time, Tom tells Tessio that Michael is aware of his betrayal, and they take him away to meet his maker.

Michael personally questions his brother-in-law Carlo about his involvement in setting up Sonny’s murder. After initially denying any involvement, Carlo confesses Barzini contracted him. After Michael tells Carlo that he is out of the family business, Clemenza (Richard Castellano) kills him. Later, Connie accuses Michael of ordering her husband’s death. When Kay asks him about it, Michael denies it—she accepts that answer. Then Kay watches with apprehension as Michael receives his capos, who address him as the new Don Corleone.