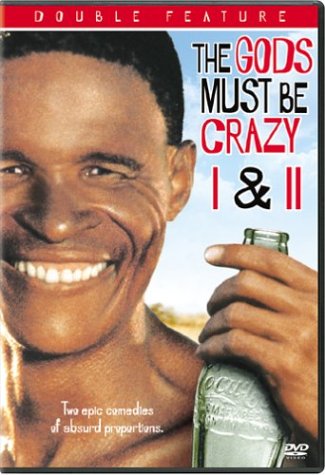 ‘The Gods Must Be Crazy’ Movie Summary

In The Gods Must Be Crazy, after a tribe of bushmen, living contently in the middle of the Kalahari, discovers an empty Coke bottle, it’s presence sets off a wave of anger and violence to possess it. The elders elect Xi to drop the item off the edge of the world so their live may return to normal. His journey takes him across the desert where he comes across a bumbling scientist and a band of revolutionaries. In the end, will this humble man save his tribe and his community at large?

‘The Gods Must Be Crazy II’ Movie Summary

The Gods Must Be Crazy II (1989) returns N!Xau to the bizarre world of the white man, this time in a slicker plot (and a with a bigger budget) that, perhaps predictably, yields fewer real belly laughs than the first time around. Director Jamie Uys sticks to his cherished notions that tribesmen are wiser than civilized people, and that fast-motion comedy is inherently funny. The storyline begins with N!Xau’s innocent Bushman searching for his lost children; he then gets sidetracked by subplots. The humor is basic, but in best silent-movie tradition Uys prepares his set-pieces with elaborate care, and he understands the value of the long-delayed pay-off. –Robert Horton