The Good, the Bad and the Ugly takes place during the American Civil War. Three men of various reputation seek $200,000 in Confederate gold. Two on again/off again partners, Tuco and Blondie, have used the reward on Tuco’s head to swindle local towns out of said money. However, when they come across a dying man named Bill Carson, he tells Tuco the name of the cemetery where the gold’s buried, and tells Blondie the name of the grave it’s in. Now, the two men have to keep each other alive if they want to find the booty. When a third man named Angel Eyes comes to collect the treasure too, it leads to a three-way showdown amidst a major battle between Confederate and Union armies. 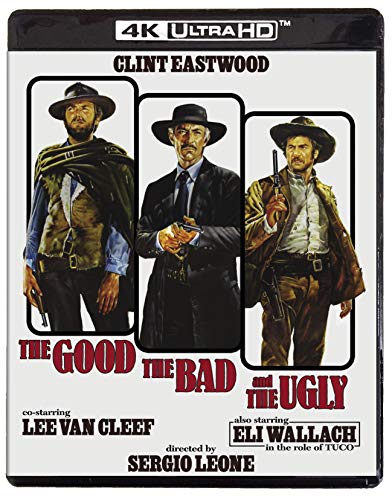 The Good, the Bad and the Ugly [4KUHD]

‘The Good, the Bad and the Ugly’ Movie Summary 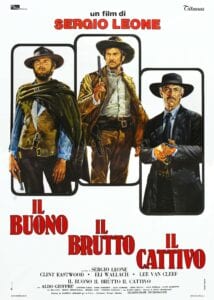 Sergio Leone‘s The Good, the Bad and the Ugly takes place during the American Civil War, 1862. Three bounty hunters are out looking to kill a fugitive Mexican bandit named Tuco Ramírez (Eli Wallach). Tuco is able to shoot them before escaping on horseback.

Meanwhile, a mercenary, who goes by the name of Angel Eyes (Lee Van Cleef), interrogates a former Confederate soldier named Stevens. While Angel Eyes has a contract to kill Stevens he wants to know about a fugitive named Jackson who’s wanted for stealing a cache of Confederate gold. Angel Eyes gets it out of Stevens that Jackson is now going by the name Bill Carson.

Stevens then offers Angel Eyes $1,000 to kill Angel Eyes’s employer named Baker. Angel Eyes accepts the job before killing Stevens. A contract is a contract. He then returns to collect his bounty from Baker—and then shoots Baker to fulfill his contract with Stevens.

By now, a Man with No Name, whom Tuco refers to as Blondie (Clint Eastwood), has rescued Tuco from the bounty hunters, and he delivers Tuco to the local sheriff to collect the $2,000 bounty on his head. As the sheriff is about to hang Tuco, Blondie shoots Tuco’s noose; setting him free. The two then escape on horseback before splitting the bounty in what is revealed to be a money-making scheme.

As they swindle another town for more reward money, we find Blondie growing weary of Tuco’s constant complaining. He decides to abandon Tuco in the desert without horse or water. However, Tuco still manages to walk to a nearby village, and track Blondie to a Confederate-controlled town. A little pissed at Blondie, Tuco holds him at gunpoint so he can force him to hang himself. Unfortunately for him, Union forces shell the town, and Blondie escapes.

Tuco doesn’t give up, and after a very long trek, he recaptures Blondie. He then forces him to march across the desert until he collapses from dehydration. As Tuco prepares to finish him off, he spots a runaway carriage with several dead Confederate soldiers in it, along with Bill Carson who’s near death. Carson tells Tuco of the $200,000 in Confederate gold that’s buried in a grave in Sad Hill Cemetery.

As Tuco demands to know the name on the grave, Carson collapses from thirst—unable to answer. Tuco fetches him some water, but by the time he returns, he’s died. Unfortunately for Tuco, Blondie is slumped next to him, and he claims that Carson told him the name on the grave before dying. Since Tuco now needs to keep Blondie alive, he gives him the water, and takes him to a nearby mission where his brother is the Abbot.

An arresting twist in the journey

Once Blondie recovers, the two leave in Confederate uniforms they took from Carson’s carriage. Union soldiers then capture them before hauling them off to a prisoner of war camp in Batterville.

During a roll call, Tuco answers for Bill Carson. This gets the attention of Angel Eyes who is disguised as a Union sergeant at the camp. He finds and tortures Tuco until he reveals the name of the cemetery, but that’s it since only Blondie knows the name on the grave. However, Angel Eyes knows torture won’t break Blondie.

Instead, he offers to make him a partner with an equal share of the gold. Blondie accepts, and heads out with Angel Eyes and his gang. The Union soldiers load Tuco on to a train to execute him, but he’s able to escape.

Soon, Blondie, Angel Eyes, and his gang arrive to an evacuated town. Coincidentally, Tuco fled to the same town, and as he takes a bath in a hotel, Elam, one of the three bounty hunters who tried to kill him originally, surprises him. When Tuco shoots him, the gunshots catch Blondie’s attention who then looks to see what the ruckus is all about. Once he finds Tuco, they agree to resume their partnership. As the two kill Angel Eyes’s men, they discover Angel Eyes has escaped.

The Civil War gets in the way again

Tuco and Blondie travel toward Sad Hill only to find Union troops blocking one side of a strategic bridge with the Confederates on the other. Blondie comes up with a plan to destroy the bridge in hopes the two armies will disperse, and they can have access to the cemetery.

As they set the explosives on the bridge, Tuco asks to share their information in case one of them dies in the melee. Tuco reveals the name of the cemetery, and Blondie reveals Arch Stanton is the name on the grave.

As the bridge explodes, the two armies disperse as hoped. Tuco steals a horse, and heads to Sad Hill to claim the gold for himself. There, he finds Arch Stanton’s grave, and begins to dig. Blondie soon shows up with his gun blazing, and tells Tuco to keep digging.

Next, Angel Eyes surprises the men as Blondie opens Stanton’s grave. They only find a skeleton—no gold. Blondie informs the men that he lied about the name on the grave, and then makes them an offer. He’ll write the real name of the grave on a rock, and then place it face-down in the cemetery’s courtyard. Then the will have a three-way due for all the gold. They all agree.

As the men slowly stare each other down, they finally all draw at once. Blondie shoots and kills Angel Eyes as Tuco discovers that his own gun is unloaded—Blondie took care of that the night before. Blondie then reveals that the gold is really in the Unknown grave beside Arch Stanton’s.

Although Tuco’s excited to find the bags of gold, that quickly changes when Blondie holds him at gunpoint again. He then orders him to meander over to a tree where there’s a hangman’s noose waiting for him.

Once Blondie binds Tuco’s hands, he forces him to stand on a precariously unbalanced grave marker. He then takes half the gold, and rides away. Tuco screams for mercy until Blondie returns into sight on the horizon. He pulls out a riffle, and shoots the rope. Tuco drops onto his share of gold—alive, but all tied up. Tuco curses at Blondie as he rides off into the sunset.