Benjamin Braddock returning home to California after graduating college. While his parents are quite proud of the young man, Ben’s not quite sure what to do with the rest of his life. Soon though, Mrs. Robinson, the wife of his father’s partner, becomes smitten with him and tries to seduce Ben. It works, and they begin to meet regularly in hotel rooms. However, Mrs. Robinson has a beautiful young daughter named Elaine, and she warns Ben to stay away. Ben’s father though goads him into taking her out on a date anyhow. Ben quickly becomes smitten with Elaine, but when she learns he’s been having an affair with her own mother, she wants nothing to do with him. 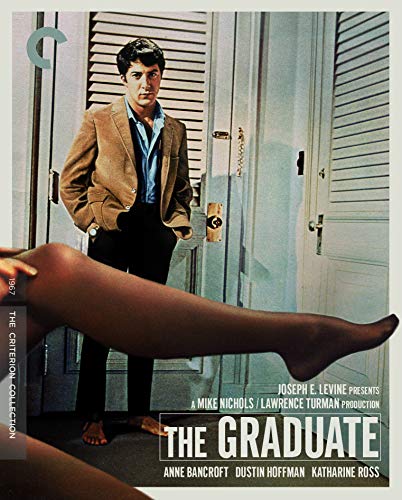 The Graduate (The Criterion Collection) [Blu-ray] 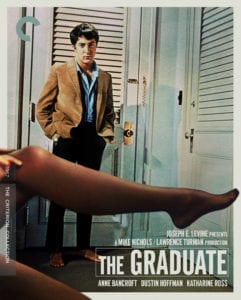 Anguished Benjamin Braddock arrives home to Southern California from college out East, the only child of affluent Beverly Hills parents. Although Ben is smart, accomplished and rich he’s unhappy and that shows from the outset. He wants to modulate his future to his own liking although at the graduation party thrown in his honor a future in ‘Plastics’ is suggested.
One of the guests at the party the wife of his Fathers business party Mrs. Robinson has other designs on young Ben other than career advice and requests a lift home.

Mrs. Robinson prowls around Ben subjecting him to a trap of seduction however Ben escapes. Feeling disconnected from everyone Ben gives Mrs. Robinson a call they meet at a hotel to commence the affair, misunderstandings at the hotel desk provokes Ben to leave until a shot from Mrs. Robinson as being inadequate sends him in head first, so to speak.

Still not happy after the event which extends into further ‘time’ together, complications occur when Ben’s parents convince him to take out Mrs. Robinson’s daughter Elaine. He sabotages the date by taking her to a cocktail strip establishment however against all odds they hit it off and fall for each other.

Any continuation of that is crushed as Ben is virtually forced to confess the parental tryst. Elaine naturally refuses to believe her Mum has initiated the affair having her bail back to college at Berkeley.

Ben creepily follows trying to convince her to marry him, she seems slightly enlightened, however she is engaged to a member of the 60’s frat pack.

Mrs. Robinson threatens legal action if Ben continues his pursuit of Elaine, she is taken out of school among other drastic measures for her not to be associated with the Braddocks.

Rushed into actual marriage to the blonde yuppie Ben crashes the wedding after one of the great pursuit scenes in his little red sports car with no petrol although he did stop for directions to ‘Gordon Street’ at a petrol station.

Arriving on foot in a hot mess slamming onto the church high windows Ben upsets the apple cart of ‘true love’ bellowing Elaine at the top of his gasping desperate voice then forcing his way in fighting off irate swinging wedding guests taking the bride by arm running outside.

Jumping on a random passing Santa Barbara bus they certainly seem stoked at their daring escape until elation turns to perplexity to an uncertain immediate future.