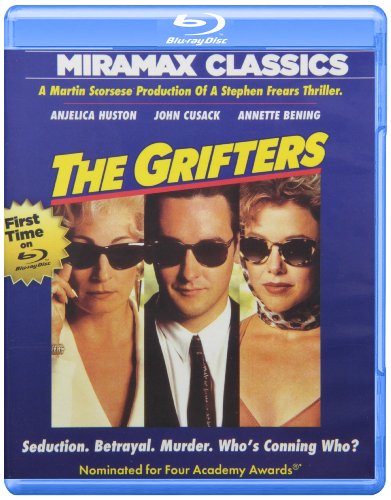 Miramax Films has announced that it will expand the availability of their Blu-ray release of The Grifters this May.  The film is currently available as a Best Buy exclusive, but will  be available everywhere on May 7th. The film is directed by Stephen Frears and stars Angelica Huston, John Cusack, Annette Bening, and Stephen Tobolowsky.  The screenplay was written by Donald E. Westlake and was based on the novel by Jim Thompson.

The Grifters is the story of the three con artists.  Lily (Huston) works for a bookie, placing bets to change the odds at the track.  When her son (Cusack) is hospitalized after an unsuccessful con job and resultant beating, she finds that even an absentee parent has feelings for her child.  This causes her own job to go wrong as well.  Each of them faces the down side of the grift.

The film was released in December of 1990 and grossed over $13 million at the box office.  The Grifters was nominated for four Academy Awards, including Best Actress (Huston), Best Supporting Actress (Bening), and Best Director (Frears). Exact technical specs and supplemental features to be included with this upcoming release are yet to be officially detailed.

Disclaimer: Affiliate links are contained in this post. This means when you click a link, and purchase an item, Movie House Memories will receive an affiliate commission. Advertisers and Affiliate Partnerships do not influence our content. See our Terms of Use about the inclusion of affiliate links on this site for more information.
February 2, 2013
1 minute read
Show More
Back to top button
Close
Close