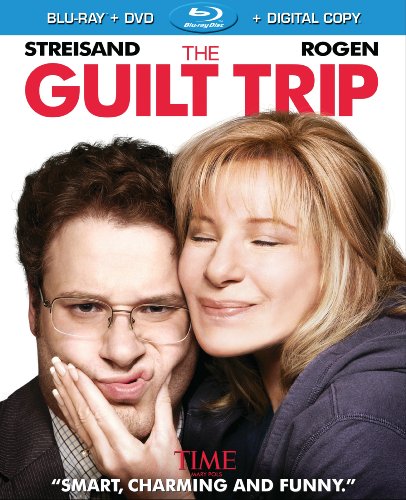 Paramount Home Distribution has officially announced and detailed its upcoming Blu-ray release of The Guilt Trip. The film is directed by Anne Fletcher and stars Barbra Streisand, Seth Rogen, Julene Renee-Preciado, and Kathy Najimy. The Guilt Trip will be available for purchase online and in stores across the nation on April 30th.

In the film, an overly neurotic inventor, Andy (Rogen), invites his overbearing mother, Joyce (Streisand), along on a cross-country road trip in order to sell his latest invention and, unbeknownst to her, to reunite Joyce with a former lover. As the pair embark on their journey, Andy finds himself growing increasingly agitated by his mother’s behavior, while getting ever more closer to her at the same time.

The Guilt Trip was released in December of 2012 and grossed over $37 million at the box office. The Blu-ray will include several special features, including: the feature film in high definition; Barbra & Seth featurette; Barbra’s World featurette; Guilt Trip: A Real Mother of a Road Trip featurette; In the Driver’s Seat featurette; Not Really a Road Trip Movie featurette; alternate openings; an alternate ending; a gag reel; over 10 deleted scenes; and an Ultraviolet copy of the film.

Disclaimer: Affiliate links are contained in this post. This means when you click a link, and purchase an item, Movie House Memories will receive an affiliate commission. Advertisers and Affiliate Partnerships do not influence our content. See our Terms of Use about the inclusion of affiliate links on this site for more information.
February 16, 2013
1 minute read
Show More
Back to top button
Close
Close