Roy Collins and Gilbert Bowen are on a road trip to the Mexican town of San Felipe on the Gulf of California for a planned fishing trip. Just south of Mexicali, they pick up Emmett Myers, a notorious hitchhiker on a killing spree. He immediately pulls a gun and forces them to take the scenic route towards the dusty town of Santa Rosalía. Once there, Myers intends to ferry it across the Gulf of California to Guaymas. However, the trio winds up trekking it across the desert on foot after their car breaks down. Once they make their way to Santa Rosalía, Myers finds his luck is about to run out. 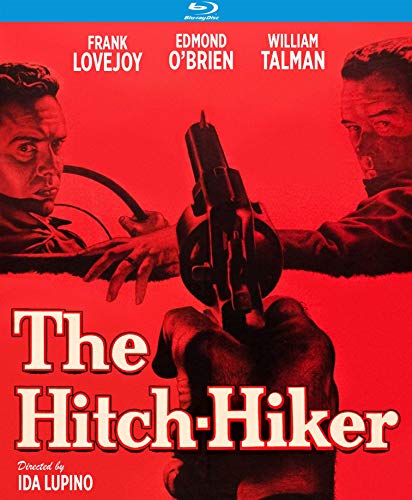 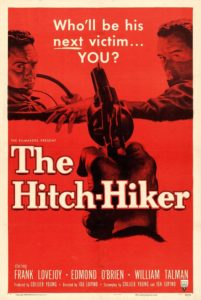 An opening montage shows hitchhiker, Emmett Myers (William Talman), catching a ride with various people across California. He then robs and kills each driver. Even though police have ID’d him and the local newspapers have caught on to the story, two buddies, Roy Collins (Edmond O’Brien) and Gilbert Bowen (Frank Lovejoy) have no idea what they are about to get into. They are driving south in California on their way to a fishing trip in San Felipe, Mexico.

South of Mexicali, they come across Myers and pick him up. He’s not a friendly guy, and he quickly pulls a gun on the two and takes them hostage. Myers is looking to go south as well, but he takes them off the main highway as to not catch the eyes of the law. They trek over dirt roads along the Baja California Peninsula toward Santa Rosalía. Once there, Myers will take a ferry across the Gulf of California to Guaymas.

During the ride, Myers does his best to both humiliate the two men and scare them into obedience. He has Collins pull over in the desert to test both his and Bowen’s shooting skills. He makes Collins walk a distance away from them so that the other two can have a contest of shooting a tin cup out of Collins’ hand.

As the journey progresses, Collins decides to take his chances. When he thinks Myers is sleeping, he makes a run for it and Bowen comes along. Myers is a light sleeper on account of his bum eye and drives after the men. Collins falls and badly injures his ankle and Myers recaptures the men, sparing their lives for now.

The tough terrain damages the car’s suspension, radiator, tires, and pretty much everything on the car. Eventually it breaks down for good and Myers forces them to continue on foot despite Collins’ injury. Myers ridicules the men for showing empathy for the other man which he considers weakness. He believes a gun is the ticket to getting anything you want in life, not being a good person.

All this time, the police in the U.S. and Mexico have been searching for Myers. They know he has abducted Collins and Bowen. However, to keep the men safe (and Myers in the dark), the police purposely report to the media they think Myers is still in the United States.

Eventually the three men arrive in Santa Rosalía, and Myers forces Collins to change clothes with him to conceal his true identity. Unfortunately for Myers, the ferry to Guaymas was destroyed in a fire, so he hires a fishing boat from a local resident. However, that young man recognizes Myers as a wanted criminal, and contacts the policía. When night falls and the three men arrive at the pier, they find the policía waiting for them too. There’s a shootout, and Myers and Bowen fight. Myers loses. The policía arrest him, free Collins and Bowen, and the men are returned home unharmed.