Seconds before an alien construction crew demolishes the Earth, a researcher, penning a new edition of The Hitchhiker’s Guide to the Galaxy, rescues an Englishman named Arthur Dent… and Arthur’s day only gets worse from there. Before it’s over, he will have a fish stuck in his ear, be thrown out of an airlock, reunited with the love of his life, insulted, beaten, sickened, almost had his brain sawed out by mice, and most heinously… deprived of his beloved tea. 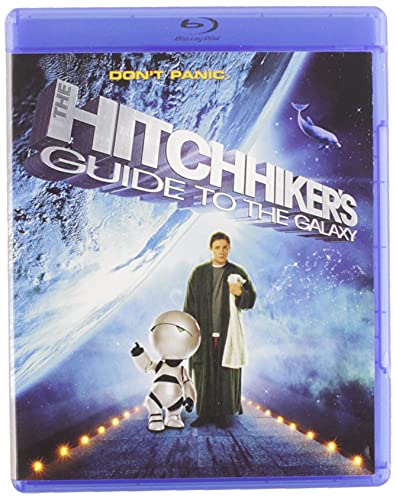 The Hitchhiker's Guide to the Galaxy [Blu-ray]

‘The Hitchhiker’s Guide to the Galaxy’ Movie Summary 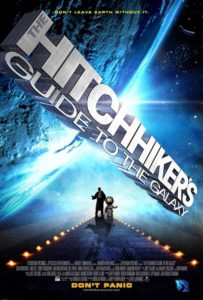 One bright morning, Arthur Dent (Martin Freeman) wakes to find a demolition crew in front of his house so that the government may build a bypass. He lies down in a vain attempt to stop the main bulldozer. As this goes on, Arthur’s friend, Ford Prefect (Mos Def) frantically arrives and makes him go to the pub with him. As the two drink three pints each, Ford tells Arthur that he’s actually an alien from Betelgeuse. He’s also a journalist working on a guide book to the universe known as The Hitchhiker’s Guide to the Galaxy. Ford warns him that a race of Vogons are going to demolish the Earth in a matter of minutes to make way for a hyperspace bypass.

As the Vogon fleet arrives and orbits the Earth, Ford hitchhikes with Arthur to one of the ships. The Vogons quickly discover the two stowaways and toss them out an airlock. However, the computer system from a starship called the Heart of Gold locks on to a signal from Arthur’s cellphone and it arrives to rescue the two, improbable as that may sound.

Onboard is Ford’s semi-cousin Zaphod Beeblebrox (Sam Rockwell) who’s the galaxy’s newly elected president and even newer starship thief. Also on the ship is Tricia “Trillian” McMillan (Zooey Deschanel), an Earth woman whom Arthur had met previously at a party in Brittain and was smitten with. The ship’s also staffed with a clinically depressed robot named Marvin (Warwick Davis / Alan Rickman (voice)).

Zaphod stole the ship so he can find the Ultimate Question of Life, the Universe, and Everything which an alien supercomputer named Deep Thought (Helen Mirren (voice)) gave an answer to of 42. Zaphod thinks the question lies on the planet Magrathea which can only be found using the Heart of Gold’s improbability drive through trial and error.

One of the drive’s attempts to reach Magrathea lands them on the planet Viltvodle VI… home of Zaphod’s rival, Humma Kavula (John Malkovich). Kavula captures the group when Zaphod tries to confront him. However, Kavula offers him the coordinates to Magrathea in exchange for Zaphod recovering a gun on the planet. It’s a the point-of-view gun that makes anyone whose beam it hits temporarily see things from the shooter’s perspective.

Zaphod agrees, but Kavula takes one of his heads as hostage to ensure he will return once he finds the gun. As the group leaves, Vogons arrive and capture Trillian. Arthur leads them on a rescue attempt on the Vogon’s home planet. Before they can rescue her though, Trillian learns that Zaphod signed the order to destroy Earth—thinking the Vogon’s form he signed was nothing more than a person who wanted his autograph. The group flees the planet, and after an hour off for lunch, the Vogons take chase again. This time they have the Galactic Vice-President, Questular Rontok (Anna Chancellor) in tow.

The Heart of Gold takes the group to Magrathea, but the planet’s closed. When Zaphod flies them closer, the planet’s defense system sends two thermo-nuclear missiles at the ship. In a panic, Arthur re-activates the improbability drive. It transforms the missiles into a bowl of petunias and a whale. The Heart of Gold lands safely on the planet—the flowers and whale not so safely.

Zaphod, Ford, and Trillian enter a portal that takes them to Deep Thought. Arthur is too chicken to go through, and by the time he works up the courage to do so, the portal closes. As Arthur and Marvin sit outside the portal, the others learn from Deep Thought that after coming up with the answer of 42, its creators had Deep Thought design another computer to come up with the Question. That computer was the newly destroyed planet Earth.

While Zaphod’s disappointed in the news, they do recover the Point-of-View gun. Trillian uses it on Zaphod to show him how much she hates him for his accidental destruction of the Earth. As the three argue in the room they found the gun, unknown assailants capture them.
Meanwhile, back at the portal, a man named Slartibartfast (Bill Nighy) greets Arthur. He’s a planet builder and he takes Arthur to a pocket dimension to show him a new version of Earth that they have nearly completed.

Slartibartfast takes Arthur to his recreated home on the planet where inside, Zaphod, Trillian, and Ford enjoy a feast courtesy of the pan-dimensional beings who commissioned Arthur’s original Earth. They have taken the form of two white mice. The mice believe they can remove Arthur’s brain to discover the Ultimate Question of Life, the Universe, and Everything. Arthur manages to escape their mouse trap and crush the two under a teapot. The mice disappear into nothingness.

Before the group can celebrate, Questular and the Vogons show up outside Arthur’s home (with Marvin as their prisoner) and open fire. The group drops the Point-of-View gun and runs for cover in Arthur’s camper parked out front. All looks lost, but Marvin picks up the gun and shoots it at all the Vogons; making them all as depressed as him. Unable to fight, Slartibartfast’s crew hauls them away.

Zaphod reunites with Questular, and Arthur decides to explore the galaxy with Trillian. Slartibartfast starts up the new Earth without Arthur and Trillian, and the Heart of Gold takes the group to The Restaurant at the End of the Universe.