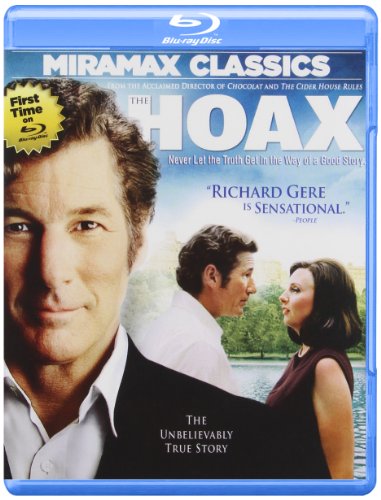 Echo Bridge Entertainment has announced that they are bringing The Hoax to Blu-ray this May.  The film is directed by Lasse Hallström and stars Richard Gere, Alfred Molina, Marcia Gay Harden, Hope Davis, David Aaron Baker, and Julie Delpy.  The Hoax will be available from stores on Blu-ray on May 7, 2013.

The film takes place in early 1971, McGraw-Hill passes on Clifford Irving’s (Gere) new novel. He’s desperate for money, so, against the backdrop of Nixon’s reelection calculations, Irving claims he has Howard Hughes’s cooperation to write Hughes’s autobiography.  With the help of friend Dick Suskind (Molina), Irving does research, lucks into a manuscript written by a long-time Hughes associate, and plays on corporate greed.  He’s quick-thinking and outrageously bold.  Plus, he banks on Hughes’s reluctance to enter the public eye.  At the same time, he’s trying to rebuild his marriage and deflect the allure of his one-time mistress, Nina Van Pallandt (Delpy).  Can he write a good book, take the money, and pull off the hoax?

The Hoax was released in April of 2007 and grossed over $7 million at the box office.  Exact technical specs and supplemental features to be included with this upcoming release are yet to be officially detailed.

Disclaimer: Affiliate links are contained in this post. This means when you click a link, and purchase an item, Movie House Memories will receive an affiliate commission. Advertisers and Affiliate Partnerships do not influence our content. See our Terms of Use about the inclusion of affiliate links on this site for more information.
February 1, 2013
1 minute read
Show More
Back to top button
Close
Close