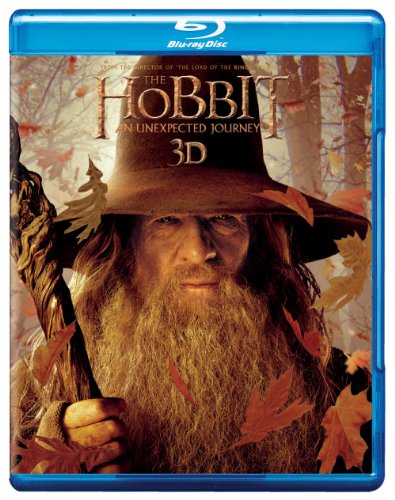 Warner Bros. Home Entertainment has revealed that they are bringing filmmaker Peter Jackson‘s The Hobbit: An Unexpected Journey to Blu-ray and Blu-ray 3D this March.  The film is directed by Jackson, the director of The Lord of the Rings trilogy, and stars Martin Freeman, Ian McKellen, Richard Armitage, Hugo Weaving, and Andy Serkis.  The Hobbit: An Unexpected Journey will be available in a 3D Blu-ray Combo Pack and Standard Blu-ray Combo Pack on March 19, 2013.

In the film, Bilbo Baggins (Freeman) is swept into a quest to reclaim the lost Dwarf Kingdom of Erebor from the fearsome dragon Smaug.  Approached out of the blue by the wizard Gandalf the Grey (McKellen), Bilbo finds himself joining a company of thirteen dwarves led by the legendary warrior, Thorin Oakenshield (Armitage).  Their journey will take them into the Wild; through treacherous lands swarming with Goblins and Orcs, deadly Wargs and Giant Spiders, Shapeshifters and Sorcerers.  Although their goal lies to the East and the wastelands of the Lonely Mountain, they first must escape the goblin tunnels, where Bilbo meets the creature that will change his life forever: Gollum (Serkis).  Here, alone with Gollum, on the shores of an underground lake, the unassuming Hobbit not only discovers depths of guile and courage that surprise even him, he also gains possession of Gollum’s “precious”… a simple, gold ring that is tied to the fate of all Middle-earth in ways Bilbo cannot begin to imagine.

The Hobbit: An Unexpected Journey was released in December of 2012 and has become a box office smash.  The film has grossed over $940 million dollars in worldwide box office to date.  The Hobbit has been nominated for three Academy Awards at this year’s ceremony to be held in late February.

Exact technical specs and supplemental features to be included with these upcoming releases have yet to be officially detailed.

Disclaimer: Affiliate links are contained in this post. This means when you click a link, and purchase an item, Movie House Memories will receive an affiliate commission. Advertisers and Affiliate Partnerships do not influence our content. See our Terms of Use about the inclusion of affiliate links on this site for more information.
January 31, 2013
1 minute read
Show More
Back to top button
Close
Close