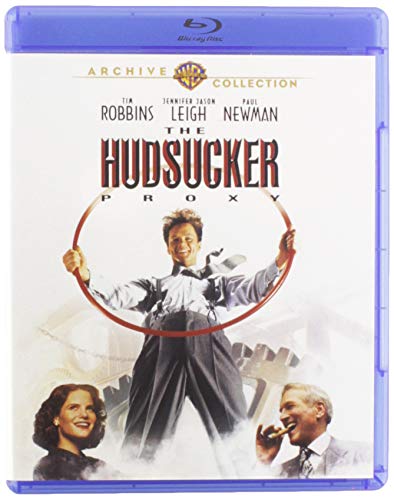 The Warner Archive Collection, a division of Warner Bros. dedicated to showcasing previously unavailable films and television shows, has announced the Blu-ray release of The Hudsucker Proxy. The film is directed by award-winning director Joel Coen and is written by Joel Coen, Ethan Coen, and Sam Raimi. The Hudsucker Proxy stars Tim Robbins, Paul Newman, Jennifer Jason Leigh, Charles Durning, and Bruce Campbell. The film will be available for order as a WBShop exclusive and arrives on February 26th.

In the film, when the founder of Hudsucker Industries leaps to his death from the 44th floor boardroom window the board of directors panics. But there is a plan: install a complete imbecile as president of the company and devalue the stock so the board can acquire a controlling interest for themselves. But where can they find such a guileless patsy? Enter Norville Barnes (Robbins). Fresh off the bus from Muncie, Indiana, as a graduate of the 1958 class of the Muncie College of Business Administration, Norville is ready to start at the bottom and work his way up to the top of the corporate world… he just never imagined it would happen so quickly.

The Hudsucker Proxy was released in March 1994 and grossed over $2 million at the box office.  The film opened the 1994 Cannes Film Festival.

The Blu-ray edition of The Hudsucker Proxy features a DTS HD-Master Audio 2.0 track. Special features have yet to be revealed, although early reports indicate the disc will not include any significant extras.