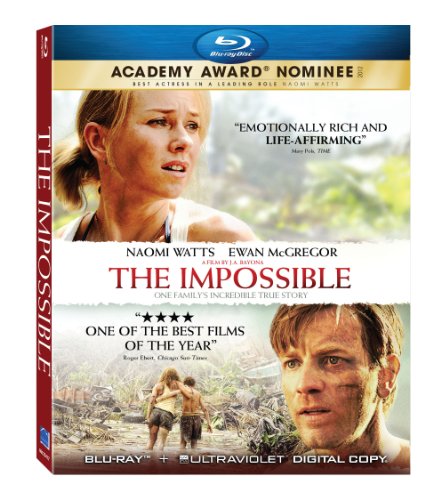 Summit Entertainment has officially announced that it will release on Blu-ray director Juan Antonio Bayona‘s The Impossible (Lo imposible) this April. The film stars Naomi Watts, Ewan McGregor, Tom Holland, and Geraldine Chaplin.  The screenplay was written by Sergio G. Sánchez which was based upon the story by María Belón.  The Impossible will be available for purchase online and in stores across the nation on April 23rd.

McGregor and Watts star in this Academy Award-nominated disaster drama set in Thailand during the 2004 Boxing Day tsunami.  Henry and Maria (McGregor and Watts) are spending their Christmas holidays relaxing in a Thai resort with their three sons, Lucas (Holland), Thomas (Samuel Joslin) and Simon (Oaklee Pendergast), when the deadly wave crashes through the hotel complex where they are staying.  All five members of the family are swept away, and Maria and Lucas manage to stay together and to keep above the water.  Once the water settles, the badly-injured mother and son begin a frantic search for the missing members of their family, but it soon becomes apparent that Maria is desperately ill and must be given medical help as quickly as possible.

The Impossible was released in December of 2012 and has grossed over $145 million at the worldwide box office.  The film is nominated for an Academy Award for Best Performance by an Actress in a Leading Role (Watts).

Disclaimer: Affiliate links are contained in this post. This means when you click a link, and purchase an item, Movie House Memories will receive an affiliate commission. Advertisers and Affiliate Partnerships do not influence our content. See our Terms of Use about the inclusion of affiliate links on this site for more information.
February 8, 2013
1 minute read
Show More
Back to top button
Close
Close