With his daughter about to marry, Manhattan dentist Sheldon Kornpett is getting in over his head. The groom’s father Vince Ricardo (who may/may not be CIA) has been in over his head so long he may have lost it totally. 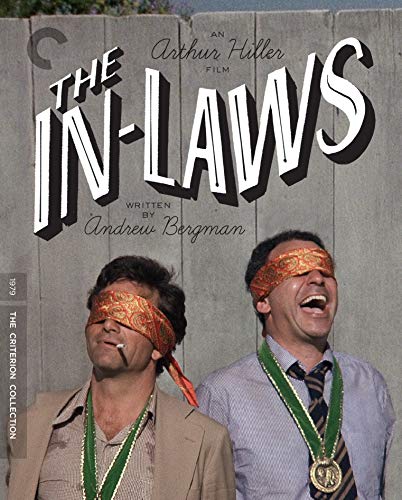 The In-Laws (The Criterion Collection) [Blu-ray] 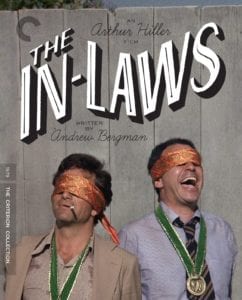 Peter Falk plays Vince Ricardo – who may or may not work for the CIA. Vince hijacks an armored car in order steal US Engraving plates to help a Central American Dictator flood the economy with cash in order to create mass inflation around the world, and thereby eliminate their debt. When he finds out he needs to come up with one and a half million dollars by the next day he lets them know that he his son is getting married this weekend and he hasn’t even had a chance to meet his new In Laws yet.

That night, Vince and his family go to meet the new In-Laws, led by Alan Arkin who plays Sheldon Kornpett – a solid and stable dentist with a routine, humdrum life. At dinner, Vince immediately arouses suspicion from Shelly by spinning wild stories about living in the jungles of Guatemala and watching as Tsetse flies would kidnap native children and carry them off to certain death while clutched in their little Fly Beaks. While there, Vince secretly stashes one of the engraving plates in Shelly’s basement for safe keeping.

The next day when Vince goes to retrieve the other engraving from his office there are two seventies thugs waiting for him. With no way to get into his own office without being seen by the goons, Vince enlists the help of an unknowing Sheldon by asking him to retrieve the bag holding the engravings out of Vince’s safe. Not knowing what he is getting in to, and thinking he is helping out a family member, Shelly decides to help out and they go get the bag.

After a chaotic cab ride to Vince’s office, Sheldon walks past the goons and up to Vince’s office, where he retrieves the bag from Vince’s safe, which is behind an personally autographed picture of President Kennedy. The goons soon realize what is going on and chase after Shelly – guns drawn. Realizing he is in trouble, Shelly hustles down the fire escape and begins running for his life – through the streets of New York, and particularly West 31st street. He makes it back to the cab – only to find that Vince and the cabbie are busy having coffee next door. It’s here that Vince divulges to the cabbie that he works for the CIA. While Shelly is dodging bullets outside the window, Vince pays the check and heads out.

After rescuing Shelly from the thugs, they head back to Shelly’s office where Vince informs him that he has just taking park in the theft of the US Currency Plates – a crime that is punishable by 40 years in a maximum security prison – to which Shelly promptly passes out in his office. After coming to, Vince and Shelly head to a diner so that Vince can inform Shelly of what is going on (and that the Pea Soup is a little salty, but very nice). Vince says that he works for the CIA and that he stole the plates in order to break up the counterfeiting ring planned by the Central American country. Also, that he is REALLY PROUD of how well Shelly handled himself throughout the chase – which brings a proud smile to Shelly’s face. But unfortunately the CIA felt the plan was too risky – so Vince did this on his own. And if he gets caught the CIA will say they don’t know him. So they are on their own.

Meanwhile, back in Shelly’s basement, while they are getting ready for the wedding, some movers discover the other engravings. They take them to the bank, only to find out that the Federal Crime is front page news. Now – Shelly is a suspect in the hijacking. Upon arriving home, Shelly finds federal agents waiting for him. Panicked, he takes off until he loses them. He calls Vince to let him know what is going on.

Vince tells him not to worry – and to meet him at a small airport and they will fly to Scranton, Pennsylvania for an afternoon – after which everything will be fixed. Shelly agrees and the two take off in a small jet with two extremely Asian pilots, the Wong Brothers, who don’t speak English. Suddenly Shelly realizes they are not going to Scranton – that they are going to the Central American country of Tijata, a small island south of Honduras. There, they will meet General Jesus Braunschweiger – a member of the parliament who will help them out. Unfortunately the General is gunned down at the airport – the Wong brothers take off – and Vince and Shelly are stranded on the runway being shot at. When follows is one of the funniest sequences in movie history – you’ll just have to watch it for yourself.

Escaping the airport, Vince and Shelly make it to the safety of their chicken infested hotel. While at the hotel, Shelly sneaks away and calls a local office of the CIA – where he finds out that Vince no longer works for the CIA because so many of his crazy ideas have ended in tragedy. Shelly tries to escape but has nowhere to go – so he accompanies Vince and they eventually make their way to meet with General Garcia, the hand-puppet-talking Tijatan Dictator, played to perfection by Richard Libertini. General Garcia is excited to see Vince and they greet each other like old friends. The General adds the engraving plates to those of all the other county’s plates that he has acquired so he can create the monetary collapse that will help get his country out of debt.

For his part, the General pays Vince $20 million dollars and they celebrate with lunch out on the grounds. The General awards both Vince and Shelly with the General Garcia Medal of Freedom – a beautiful medallion engraved in his image – along with that of a whore from the town. By this point, Shelly has grown to really like the excitement he has experience, and has even warmed up to Vince. He smiles proudly upon receiving his medal. Unfortunately that excitement is short-lived as General Garcia informs Shelly and Vince that he must now kill them both.

A shock to both of them, Shelly begins panicking as the General blindfolds them and puts them in front of a firing squad. Stalling for time Vince begins asking for a cigarette for Shelly to at least go down like a man. Finally, the CIA comes bursting in – guns firing and saves the day. They rescue Vince and Shelly and arrest General Garcia. They inform Shelly that they had to give him the runaround in order to protect their cover and hope he understands. Then they ask Vince to the $10 million dollars that General Garcia gave to him – which he happily hands over to the CIA – all the while pocketing the other $10 million they didn’t know about. Vince decides that it’s time to give up the spy business and Shelly happily agrees. And sitting on $5 million dollars each – Vince and Shelly arrive at their kids wedding just in time to make a helicopter grand entrance and give their kids one heck of a wedding present – one million dollars each.

And if you ever hear anyone utter the words – “SERPENTINE” or “OH JESUS… PIGS” think back and give a warm smile and a nod to THE IN-LAWS.