In The Incredibles, Bob Parr / Mr. Incredible and his wife Helen / Elastigirl are the world’s greatest and most famous crime-fighting superheroes in Metroville. However, 15 years after saving lives and battling evil on a daily basis, the government has forced all Supers into retirement where they are to live as civilians. Bob and Helen try to live a normal life with their three children Violet, Dash and Jack-Jack; all of whom have superpowers of their own.

Bob’s never been able to give up the ghost, and looks to begin saving the city once more. He gets his chance after a mysterious communication summons him to a remote island for a top secret assignment. He soon discovers that his new employer is not who he seems, and it will take a super family effort to rescue the world from total destruction. 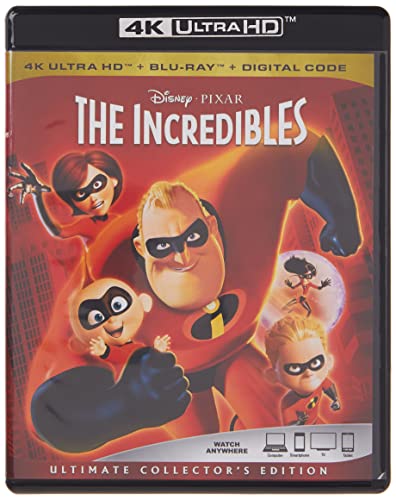 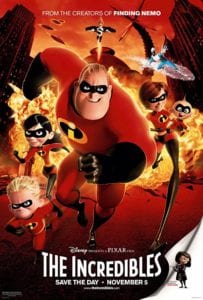 The Incredibles begins, as humans with superpowers keeping law in order in the land, but after a series of expensive lawsuits brought by innocent victims over collateral damage, the Supers became too expensive for the government to support, and they were all forced into civilian life.

Fast forward 15 years, and Mr. Incredible and his wife, Elastigirl, are living mild mannered lives as Bob and Helen in Suburbia USA. They have three kids, Violet, Dash, and Jack-Jack, with fledgling powers of their own.

Bob is still having trouble leaving his incredible life behind, and he spends his Wednesday nights with his friend, Lucius Best, AKA Frozone, listening to the police scanner and reliving their glory days.

Eventually, Bob loses his temper and his job at an insurance agency, but luckily for him, a woman named Mirage has found him, and has left him a recorded message that will self destruct in five seconds after he listens to it.

She hires Bob as Mr. Incredible to disable a robot called The Omnidroid out on a distant island; which he successfully does. This success gives Bob new confidence in himself, and he gets back into his superhero shape.

Eventually, Mirage calls him back to the distant island for another job, but it’s actually a trap that has been set by Buddy Pine, a Superfan that Mr. Incredible spurned as a little boy. Buddy has created a plan where he will send his most advanced Omnidroid to Metroville, and save the city himself because there are no more Supers to save them after previous versions of his droid destroyed the. He will then make money by selling his Super gadgets to anyone willing to pay, because when everyone is a Super, nobody is.

Helen catches wind that Bob has been working as a Super, and flies out to the island to confront him. She is shocked to learn that Violet and Dash have snuck onboard her jet too, but doesn’t have any time to scold them as jet is attacked and destroyed by missiles as it tries to land on the island. They survive, and then free Bob so the four can stop the Omnidroid and Buddy.

As the Omnidroid begins to level the city, Buddy arrives to save the day, but he quickly learns that he can’t control the droid, and it overpowers him. Eventually, with the help of Frozone, the Incredibles are able to stop the droid, stop Buddy, and restore the citizen’s faith in the Supers.