In this modern-day retelling of The Invisible Man story, Cecilia Kass is a woman trapped in a controlling and violent relationship with a wealthy optics engineer Adrian Griffin. Desperate, she resorts to drugging Adrian before fleeing to live in hiding with a friend of her sisters. After she is informed that Adrian committed suicide, Cecilia begins to relax. However, strange things began happening to her causing Cecilia to believe that Adrian is not only alive, but now has the capability to render himself invisible. 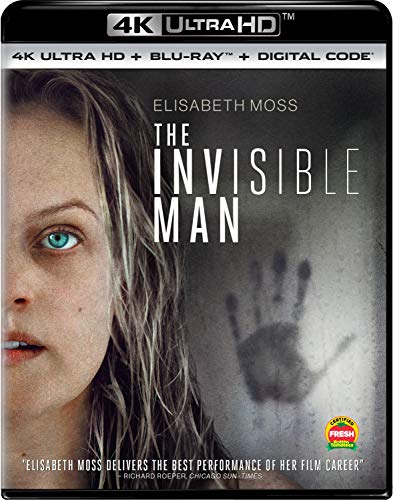 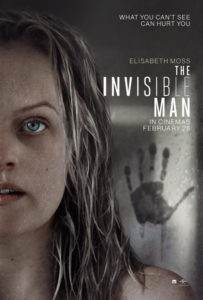 Cecilia Kass (Elizabeth Moss) is a woman trapped in a controlling and violent relationship with a wealthy optics engineer Adrian Griffin (Oliver Jackson-Cohen). To escape, she drugs Adrian with diazepam one night and flees his high-tech mansion with the assistance of her younger sister, Emily (Harriet Dyer). Cecilia goes into hiding in the home of her sister’s friend Detective James Lanier (Aldis Hodge) and his teenage daughter Sydney (Storm Reid).

Two weeks later, Cecilia is still afraid to even leave James’ house for fear of Adrian finding her. Then, she receives the surprising announcement that Adrian has committed suicide. More surprisingly, Adrian leaves Cecilia $5 million in his will to be paid out $100,000 a month if Cecilia commits no crimes and is not found incompetent. Cecilia does not want to go to the meeting with Adrian’s brother and business partner, Tom (Michael Dorman), but Emily convinces her to go. Cecilia accepts the money and uses some of it to fund Sydney’s education beyond high school.

Nevertheless, Cecilia continues to suspect that there is another presence in the house. James continually assures her she is just traumatized and paranoid and that Adrian is no longer a threat to her. But strange things continue happening to her. During a job interview, she finds her work portfolio removed from her briefcase. She then suddenly faints at the interview. The doctor tells her that it is from the elevated levels of diazepam found in her system. Cecilia is confused since she is not taking any diazepam but becomes alarmed when she finds the same bottle of bloodied diazepam with which she drugged Adrian, and dropped, during her escape.

Cecilia and James have a second meeting with Tom. She conveys her fears that Adrian has faked his death and used his optics background to become invisible to torture her. Both Tom and James convey their disbelief of Cecilia’s idea. Cecilia begs Tom to convey to Adrian to please let her go. A few days later, Cecilia and Sydney are discussing having a girl’s night together when Sydney is suddenly hit by an unseen force. Sydney and James assume that Cecilia did it and is becoming unbalanced. James takes Sydney away and orders Cecilia to leave his home before he returns.

He said that wherever I went, he would find me, walk right up to me, and I wouldn’t be able to see him. Cecilia Kass (Elizabeth Moss)

Alone at the house, Cecilia tries to discover Adrian’s secret. She finds Adrian’s phone in the attic, along with a knife, and her work portfolio. She immediately receives a text saying “surprise.” Cecilia dumps paint down the attic doorway which immediately coats an invisible figure. She struggles with the figure but eventually she escapes. She takes an Uber to Adrian’s home to search for signs that he is still alive. She finds the bed slept in, and an invisible bodysuit in the basement lab. She takes the suit and hides it in a bedroom closet. She is then attacked by an invisible figure again. She manages to escape for a second time. This time she calls her sister Emily to meet her. Emily is not speaking to Cecilia due to receiving an email allegedly from Cecilia that says that she does not need Emily. Nevertheless, Emily responds, and the sisters meet at a restaurant, where the invisible figure slits Emily’s throat and places the bloody knife into Cecilia’s hand. Everyone in the restaurant believes Cecilia murdered her sister and she is arrested for the crime.

Cecilia is sent to a psychiatric hospital while she awaits her trial. She learns that she is pregnant. Cecilia is visited by Tom who threatens to take away the money she received from the will due to her violating the terms of the bequethment. He also offers to get her charges dropped if she agrees to return to Adrian and have the child. Tom reveals that Adrian tampered with her birth control to impregnate her. Cecilia turns down the offer and steals a fountain pen from him. That night, Cecilia feigns suicide and draws out her invisible stalker. She stabs the stalker with the fountain pen which causes the invisible suit to partially malfunction. The hospital security arrives, but the partially invisible figure incapacitates them all. Cecilia follows the figure out of the hospital with a gun. The figure disarms her and tells her that he will kill the ones that she loves. He specifically threatens Sydney.

Cecilia calls James to warn him. James returns home to save his daughter and finds Sydney being strangled by an unseen attacker. The attacker beats James unconscious. Cecilia arrives and uses a fire extinguisher to reveal the attacker. She then shoots the attacker multiple times in the chest, killing him. When she pulls off the mask, she is shocked to see Tom’s face. A brief time later, police storm Adrian’s house and find him tied up and alive. He claims that Tom has been holding him prisoner. The police conclude that Tom killed Emily and release Cecilia. However, Cecilia tells James that she believes that Adrian set his brother up and is the true mastermind behind everything.

Cecilia and James come up with a plan to get Adrian’s confession. Cecilia wears a wire and agrees to a meeting with Adrian. James listens in a short distance away. Cecilia agrees to a new relationship, but only if Adrian tells the truth as to what he has done. Adrian continually insists that Tom was responsible for everything. However, he claims that the entire experience has changed him. After Adrian says the word “surprise,” Cecilia excuses herself for the restroom. A few moments later, the security camera for Adrian’s house captures Adrian seemingly slitting his own throat. Cecilia returns second later, and acting distraught, calls 911. After the phone call and out of sight of the cameras, she taunts a dying Adrian. James arrives, and Cecilia tells him what happened. James notices the invisible suit in her bag, the one she hid earlier in the film. James knows that Cecilia killed Adrian, but he lets her go. The film ends with Cecilia smiling, knowing that her nightmare is over.