Frank “The Irishman” Sheeran is a former labor union official…and hitman who honed his killing skills in Italy during the Second World War. In old age, he recounts his life to a priest, and reveals the hits that defined his mob career with the Bufalino crime family. One story in particular is his part in the disappearance of his life-long friend, Jimmy Hoffa; the former president of the International Brotherhood of Teamsters, who mysteriously vanished in late July 1975 at the age of 62. 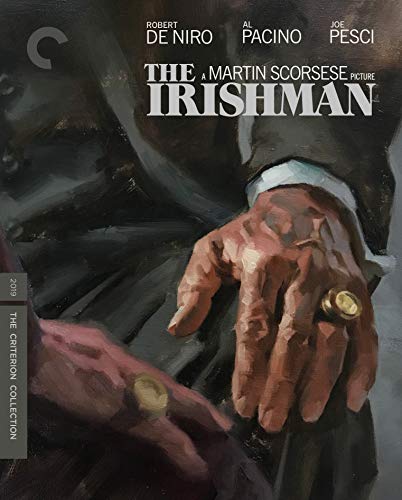 The Irishman (the Criterion Collection) [Blu-ray] 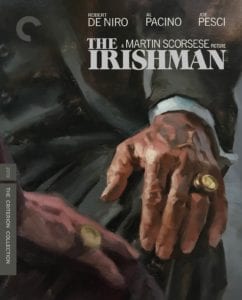 The Irishman is based on Charles Brandt’s 2004 novel I Heard You Paint Houses. The film and the novel both detail the life and times of Frank “The Irishman” Sheeran in post-World War II America.

The movie begins with an unknown man visiting Frank (Robert De Niro) in a wheelchair in a nursing home. Frank begins to recount his life as a hitman for the crime syndicates and his life working for and with Jimmy Hoffa (Al Pacino).

The film flashes back to 1950’s Philadelphia where Frank works as a delivery truck driver for a meat company. Frank cuts a deal with local gangster Felix “Skinny Razor” DiTullio (Bobby Cannavale) to provide him with sides of beef. When the meat company becomes suspicious and accuses Frank of stealing, union lawyer Bill Bufalino (Ray Romano) represents him. Bufalino gets Frank reinstated as a driver, and then introduces him to his cousin, a local crime boss named Russell Bufalino (Joe Pesci).

Frank begins to do jobs for Russell and other members of the Philadelphia crime syndicate, including murder, which is referred to in the film as “painting houses.” Russell eventually introduces Frank to Jimmy Hoffa, who is then the head of the International Brotherhood of Teamsters. Hoffa and the Teamsters have many financial ties to the Bufalino crime family, and often rely on the mob to get some of their business done.

Everyone sets their sites on Hoffa

While the Federal Government scrutinizes Hoffa, he must also fight a challenge from fellow Teamster Anthony “Tony Pro” Provenzano (Stephen Graham). He wants control and the leadership of the Teamsters. Hoffa enlists Frank’s help as an employee, but the two soon become close friends. Jimmy gets to know Frank and his family, including Frank’s four daughters; and Frank becomes close to Jimmy and his family, including Jimmy’s wife Joy (Welker White).

When John F Kennedy wins the  1960 Presidential election, the news thrills Russell and the crime syndicates. They believe that they have control over Kennedy through his father, Joe (Eugene Bunge). Hoffa, however, is none-too-pleased about Kennedy’s victory, and fears that the new President will come after both him and his Teamsters. Jimmy’s right, and Kennedy’s brother Robert (Jack Huston), the newly appointed Attorney General, make a concerted effort to bring down Hoffa and weaken the Teamsters. They are successful, and eventually arrest Jimmy with a conviction in 1964 for jury tampering.

While Jimmy does his time in prison, his replacement as head of the Teamsters, Frank Fitzsimmons (Gary Basaraba), begins overspending the labor union’s pension fund. Additionally he makes some very questionable interest-free loans to the Mafia. At the same time, the Feds also arrest Jimmy’s rival, Provenzano. The convict him for extortion where the judge sentences him to the same prison as Jimmy.

The two continue their fight behind bars. Eventually, President Richard Nixon (Jeff DeHart) commutes Jimmy’s sentence in 1971. One of the conditions of his release is that the government forbids him from any involvement in Teamsters activities until 1980. However, Jimmy begins making plans to reclaim leadership of the union that he built.

Unfortunately, the Teamsters, and the Mob, are not so keen on that idea. Jimmy has offended many individuals in the Teamster organization. Frustrated with obstacles being placed in his desire to reclaim his throne, Jimmy begins talking disrespectfully of some of the Union’s leaders and certain members of the Mafia. Russell begins to become worried about the instability of Jimmy.

Warning signs from all around

Russell confronts Jimmy at an awards dinner for Frank to warn him that his behavior offends some people. Not realizing the danger that he is in, Jimmy tells Russell that he knows certain things that the Mafia isn’t aware he knows which makes him untouchable. Jimmy further threatens that if anything were to ever happen to him, many members of the crime family would end up in prison.

Frank continues to try to be the peacemaker and bring his two friends together to broker a deal that would prevent any bloodshed. Even when Frank tries to warn Jimmy that the Mob might eliminate him, Jimmy refuses to believe it would be possible due his high profile. However, when Jimmy goes too far, Russell informs Frank that the organization authorized a “hit” on Jimmy. To make matters worse, they chose Frank to be the hitman due to his friendship with Jimmy, and their belief that Frank may try to warn Jimmy.

Time to “Paint the House”

They immediately drive Frank to an airport to fly to Detroit to conduct the hit. He meets up with Jimmy’s unsuspecting foster son Chuckie O’Brien (Jesse Plemons) and another hitman named Sal “Sally Bugs” Briguglio (Louis Cancelmi). They drive to the restaurant where Jimmy believes that he will be meeting Provenzano and Anthony Giacalone (Patrick Gallo). Frank tells Hoffa that the time and the location have changed, and that he needs to come with him.

Reluctantly, Jimmy goes with Frank after Frank assures his friend that everything is fine. Once they get to the house where the alleged meeting is to take place, Jimmy finds it empty and wishes to leave. Frank shoots Jimmy twice at close range, killing Hoffa, and then leaves the gun on the body. Later, two other gangsters retrieve the body from the house, and have the body cremated to eliminate all traces of the former union leader.

Getting away with murder

Russell died of old age in prison. Years after first entering the facility, the Feds release Frank from prison. Once out, Frank attempts to mend fences with his family; specifically his daughter Peggy who had a fondness for Jimmy. However, Frank is unsuccessful.

The film then returns to the geriatric Frank who’s been telling his story to a Catholic priest for the entirety of the film. Although Frank seeks absolution for his sins over his lifetime when the priest asks him if he feels bad for what he did, Frank fails to show any true remorse. Nonetheless, the priest gives Frank absolution for his crimes as he leaves leaving.

The film ends with Frank sitting in a room, alone with only his memories and regrets.