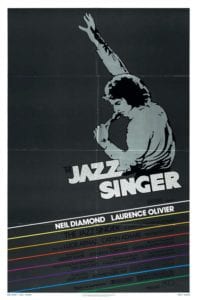 The Jazz Singer follows Jewish cantor ‘Jess Robin’ (Neil Diamond) from the synagogue to the stage. When a Hollywood big shot shows interest in his song (“Love on the Rocks”), the cantor heads for the Golden State, much to the distress of his father (Laurence Olivier) and his wife (Catlin Adams). There Jess meets Molly (Lucie Arnaz), whose faith in Jess’ talent and knowledge of the entertainment biz help him get his big break. While Jess and Molly fall for each other and Jess’ career takes off, Jess is forced to choose between a life on stage and a life without his father.