When two hired goons kill a gas station attendant in a small New Jersey town, a life insurance investigator sets out to track down the dead man’s beneficiary. This leads him to an unsolved robbery his company paid a claim on after a gang of men robbed the business of over $250k in their payroll. 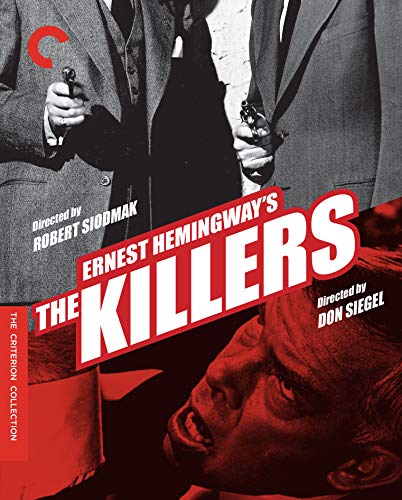 The Killers (The Criterion Collection) 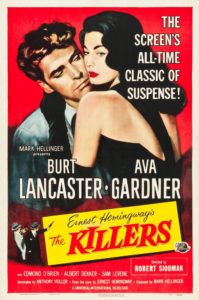 In the sleepy town of Brentwood, New Jersey, two hitmen, Max (William Conrad) and Al (Charles McGraw), arrive to kill a washed up boxer named Pete “The Swede” Lund (Burt Lancaster). The men head to a diner the Swede is known to eat at, and hold the staff and a patron named Nick Adams (Phil Brown) at gunpoint until he arrives. However, when he doesn’t show up, they the three go. Nick immediately runs to warn Lund, but when he tells him the news, the Swede doesn’t attempt to flee. He accepts his fate and the killers arrive and shoot him to death.

The next day, life insurance investigator, Jim Reardon (Edmond O’Brien), is assigned to track down the Swede’s beneficiary and pay her the $2,500 policy. This leads him down a winding rabbit hole as he interviews the Swede’s old friends and associates. When he learns Lund’s real name is Ole Anderson, he tracks down police Lieutenant Sam Lubinsky (Sam Levene), the Swede’s childhood friend.

In flashback, Sam reveals that a hand injury cut the Swede’s boxing career short. Sam even suggested the Swede join the police force, he balked at the thought because the cops’ yearly salary was something he was used to making in a month. Instead, he turned to the easy money made in the criminal underworld—even falling for the crime boss, “Big Jim” Colfax’s (Albert Dekker) girlfriend, Kitty Collins (Ava Gardner)—much to the chagrin of his then current girlfriend, Lily (Virginia Christine)—whom Sam later married. Also in the flashback, we learn that while on duty, Sam caught Kitty wearing stolen jewelry, but the Swede covered for her and claims he stole it—the lie got him a trip up the river for three years.

After serving time, Big Jim recruited the Swede and two others, “Dum-Dum” Clarke (Jack Lambert), and “Blinky” Franklin (Jeff Corey) to commit a payroll robbery in Hackensack, New Jersey. The Swede accepted the offer and was pleased to learn that Kitty was there, but she was back with Big Jim—now married to him actually.

The robbery went off without a hitch and the gang swiped over $250,000. However, the night before the heist, the boarding house they were going to use once the robbery was over burnt to the ground. All of the gang members were notified and told the new meeting place except for the Swede. Instead, Kitty told him that Big Jim was planning on double crossing him and the other two gang members were in on it. She convinced the Swede to take all of the money at gunpoint and flee—which he did. Kitty met up with him later in Atlantic City, and then disappeared with the money herself two days later.

Back in the present, Reardon heads back to the hotel where the Swede died. When Dum-Dum arrives to look for clues over the money’s location, Reardon confronts him with a gun, but Dum-Dum manages to escape. However, Dum-Dum does reveal some helpful information. He says that the safe house fire occurred at midnight, but record from the fire department confirmed the fire took place hours later. This leads Reardon to conclude that Big Jim and Kitty set the Swede up from the beginning and were responsible for his murder.

Reardon next pays Big Jim a visit who is now a legitimate and successful building contractor in Pittsburgh. Big Jim claims to not know where Kitty lives and has lost track of her whereabouts over the years, but Reardon lies to him and claims he has enough evidence to convict Kitty of the theft.

Oddly, later that night, Kitty calls Reardon at his hotel room out of the blue and asks to meet him. The two meet up at the Green Cat and once there, they order food while Kitty tells some tall tales. She claims she convinced the Swede that the others were double-crossing him because she wanted the Swede to take her away from Big Jim and her crazy life. She admits to stealing the money in Atlantic City and then agrees to double cross Big Jim to save herself from whatever evidence Reardon has on her.

As they are talking, Max and Al arrive. When they are in place, Kitty asks to be excused so she can powder her nose. Max and Al try to kill Reardon, but Reardon is two steps ahead of them. He had Sam wait at the Green Kitty before they all arrived and he shoots and kills Max and Al before they know what hit’s them. Reardon then goes to check on Kitty in the bathroom, but she has already fled through the bathroom window.

Reardon and Sam leave the nightclub with a number of police officers and head to Big Jim’s mansion. Once there, they find Dum-Dum and Big Jim in a shoot out which leaves both men mortally wounded. With Big Jim near death, Reardon asks him why he had the Swede killed. He says he was afraid the other gang members would find the Swede and realize that he and Kitty had double-crossed them all and took the money. The newly arrived Kitty kneels down beside her husband in a vain attempt to get him to exonerate her. He dies first for a happy ending.