The Land That Time Forgot begins after a German U-Boat sinks a British merchant ship. Bowen Tyler, the son of an American shipbuilder, and Captain Bradley, an experienced seaman, manage to take control of the boat. After a confrontation with the German crew, the men find themselves on a strange island. Its a place with several stages of Earth’s evolution co-existing at the same time. As a result, several types of humans are there as well as prehistoric dinosaurs. There are also active volcanoes which all add up to a challenge to survive. 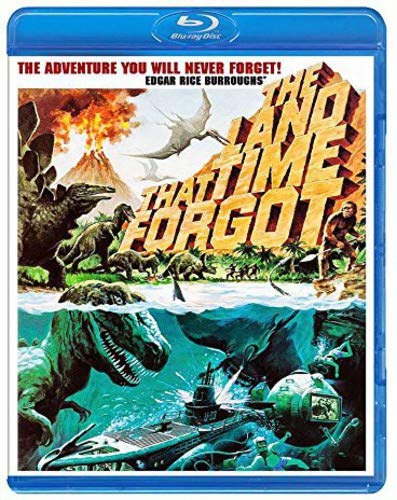 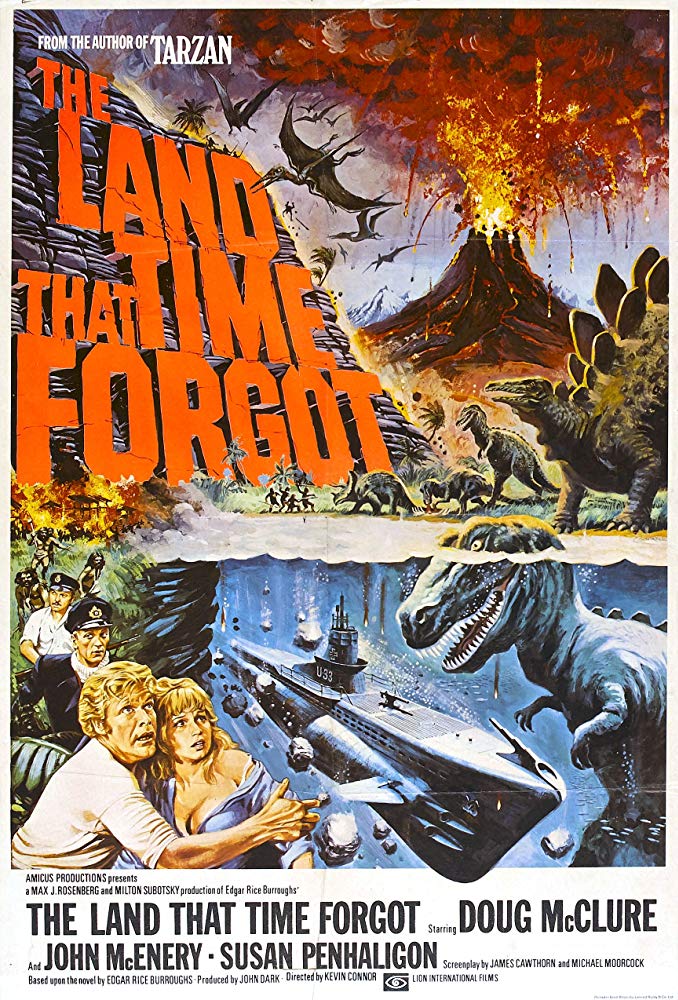 The Land That Time Forgot begins with a bottle that contains a written manuscript inside it. The bottle is discovered by a sailor in the 1970’s. As the sailor begins to read the manuscript, we hear the voice of the manuscript’s author, Bowen Tyler (Doug McClure), as he recounts an amazing tale.

The story begins during World War II. A British merchant ship is torpedoed by a German submarine, or U-boat. The survivors of the merchant ship are taken on board the submarine. Included in those survivors are Tyler and Lisa Clayton (Susan Penhaligon) who were just passengers. The leader of the Germans is Captain von Schoenvorts (John McEnery), who appears to be a man of honor.

Once on board the submarine, Tyler convinces some of the other British men to take over the submarine, believing that it will be there only chance for survival. After taking control of all the Germans on the deck, the British men move below and are successful in taking over the sub. Tyler takes command and directs Von Schoenvorts to sail to a British port. The captain reluctantly agrees and his crew steer toward a safe port. However, a renegade German officer Dietz (Anthony Ainley) is able to break free from confinement and smashes the submarine’s radio.

With the sub off course and slowly running out of fuel, the submarine sails aimlessly around the South Atlantic. The sub happens across an uncharted sub-continent, which the crew calls Caprona. The island’s shores are covered with huge mountainous rocks that prevent the submarine from making a safe landing there. However, they discover a subterranean cave that leads to the interior of the island.

Once the sub resurfaces in a lake on the interior of the island, the crew finds a tropical jungle where dinosaurs still exist alongside primitive cavemen. The crew begin searching the island for petroleum so that they can make more fuel for the submarine. During their exploits, they are attacked by deadly dinosaurs and a pack of cavemen with spears. They capture one of the cavemen who becomes a companion to the group.

The crew works to convert the petroleum to fuel over a couple of weeks. Meanwhile, Tyler and Lisa work to discover why Caprona still exists. They discover that the creatures of the island don’t evolve through the process of natural selection, but by migrating northward on the island. The more advanced species are all found towards the north.

With the petroleum almost converted to gasoline, the submarine is set to leave the next day. Tyler and Lisa lead one last expedition for food and to gather further information. While the hunting party is away, they are attacked once again by the more advanced cavemen. All of the hunting party is killed with the exception of Tyler and Lisa. Lisa is captured and taken back to the cavemen’s camp.

Tyler follows and assists Lisa in escaping. During the escape, the island suddenly turns unstable, as earthquakes and volcanoes threaten all life on the island. Tyler and Lisa fight cavemen, falling rocks, fire and lava in their attempt to get back to the submarine.

Meanwhile back at the submarine, Captain von Schoenvorts directs his crew to wait for Tyler and the hunting party to return before they leave the island despite the volcanic eruptions around them. Dietz leads a mutiny and shoots the captain and imprisons the British crew. Dietz orders the submarine to leave just as Tyler and Lisa arrive back at the shore of the lake. Dietz laughs at them and directs the submarine to dive.

However, the volcanic eruptions have caused the lake to boil, resulting in smoke and unbearable heat inside the submerging submarine. The crew is all overcome by the heat, and the submarine explodes in the water as Tyler and Lisa watch helplessly from the shore.

Tyler and Lisa are stranded, and with no other choice, they begin heading to the north end of the island. The earthquakes and volcanoes have ceased, but now the island begins to go through an ice age. Tyler and Lisa reach the high mountain shore of the north end of the island. Once there, Tyler places his manuscript into a bottle and then throws the bottle from the mountaintop into the ocean where it begins its long journey home.