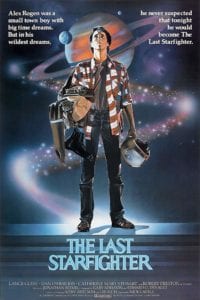 1984’s The Last Starfighter begins with teenager Alex Rogan who lives in a mobile home with his mother and younger brother named Louis. Alex is frustrated with his life and becomes even more so when his application for a scholarship to school is denied.

There’s little to do in this little trailer park Alex lives in except play an arcade game called Starfighter. In this game, the player must defend The Frontier from Xur and his evil Ko-Dan Armada in a fight to the death as part of a space battle royale.

Alex has the time and right amount of boredom to master the game. When he achieves the highest score on the game, its creator, a man named Centauri, tracks him down, and invites him on a little spin in his car as a congratulations for beating the game.

The Starfighter Alex plays on Earth is basically a simulator to find those individuals “with the gift” to blow Rylos’ enemies to pieces. Centauri recruits Alex as a gunner for Gunstar; one of the Starfighter ships (the writers are very imaginative with their names). He then meets its reptillian pilot named Grig. They must help protect The Frontier, which it turns out is an immense forcefield protecting not only Rylos, but a number of other planets from invasion. That dickhead Xur recently gave the Ko-Dan information necessary to take the field down, so the situation is that much more dire now.

When Xur discovers a spy in his ranks, he captures him, and records his execution. He then sends that execution to the Star League to see. Xur next makes plans to use the Ko-Dan’s armada to invade Rylon once its moon is in eclipse.

Alex freaks out at all the drama, and demands Centauri take him home. Back on Earth, Centauri gives him the means to contact him again if he changes his mind. Meanwhile, lightyears away, a Ko-Dan infiltrator takes out the Starfighter base’s defenses. The carnage kills almost all the Starfighters, and destroys the Gunstars. Only Grig and one modified Gunstar prototype survive.

Alex runs into Beta on Earth, and he contacts Centauri to take him back. Centauri shows up as a Zando-Zan assassin attacks Alex and Beta. Centauri shoots his arm off, and then explains to Alex that more Zando-Zan will soon arrive.

The only way for Alex to protect his family and all of Earth is to become a Starfighter, and fight the good fight. As he speaks, the Zando-Zan telepathically attempts to shoot Alex again with his severed arm. Centauri jumps in between the two, and takes the blast before killing the alien. Really though, shouldn’t Centauri have known the alien could do that, and just taken him out completely to begin with?

Alex and Centauri return to the Starfighter base where Centauri dies. Alex meets up with Grig, and the two prepare the remaining Gunstar for battle against the Ko-Dan.

Back again on Earth, Maggie, Alex’s girlfriend, becomes very suspicious of Beta. She know’s something isn’t right. When the two find a group of Zando-Zan outside a spaceship near the trailer park, Beta tells Maggie everything.

She doesn’t believe him at first, but once the Zando-Zan discover the two, and shoot Beta, his circuitry is exposed. Maggie realizes they are deep in Shitsville! They steal a friend’s truck, and drive it into the Zando-Zan ship. Maggie jumps out before it hits, but Beta sacrifices his android self, and steers it into the ship; destroying them all.

We are back in space, and Team Alex/Grig attack the Ko-Dan mothership with the last starfighter, and manage to take out its communications. However, they nearly deplete all their weapons…except for the secret one!

Once all the Ko-Dan fighters are in range, Alex activates the “Death Blossom” which spins the ship in all directions; releasing its hellfire. All the remaining Ko-Dan’s ships blow up. With its fleet in tatters, Lord Kril orders Xur’s execution. However, Xur manages to escape the mothership before Alex takes out its guidance systems, and it crashes into Rylos’ moon and goes boom!

The people of Rylos proclaim Alex as its lord and savior. They ask him to help rebuild the Star League since The Frontier is no more and Xur is still on the loose. One of the aliens walks up to Alex, and reveals himself as Centauri. He really wasn’t dead after all. He was just healing himself for a bit.

However, Alex opts to return home to Earth for a few things first, and lands the Gunstar in the middle of the trailer park. Grig lets Alex’s mother know how heroic Alex was/is. Alex asks Maggie to return with him to Rylos, and she agrees. Louis wants to be just like his brother when he grows up, so he starts playing Starfighter. No word on if he’s going to abandon their mother too.