Upon hearing that she may be the very last of her kind on Earth, a Unicorn sets out in search of others like her. Her quest won’t be easy, as it leads her straight to the evil King Haggard and his infamous Red Bull! The journey is made even more complicated when, to protect her from the envious wrath of Haggard, a spell is cast which turns the Unicorn into the Lady Amalthea, a beautiful, young human woman. However, with this new body comes new thoughts and feelings, such as love for Haggard’s son, Prince Lir. With the aid of her friends, Schmendrick the bumbling magician, and Molly Grue, the Unicorn must finish her quest before she gets lost inside her new body. 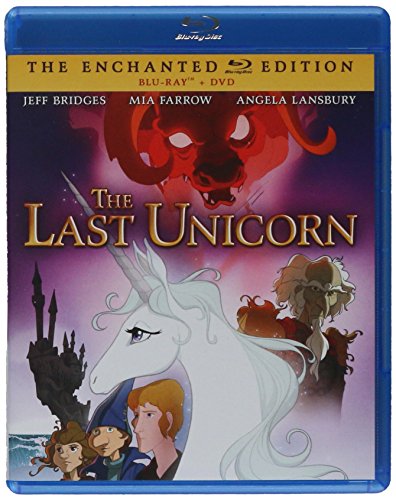 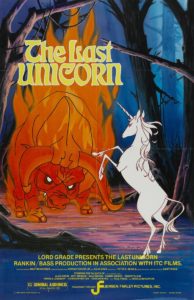 A Unicorn (Mia Farrow) overhears two hunters talk about there being only one last unicorn left in the world, and she becomes concerned. A butterfly (Robert Klein) she next meets confirms that she is the last of her kind ever since an evil creature named the Red Bull herded her species to the ends of the earth. The Last Unicorn then sets out to find out what truly happened to them.

After traveling hundreds of miles, the Unicorn finds herself among some farmlands. An elderly farmer (Jack Lester) mistakes her for a white mare, and tries to tame her. Infuriated, the Unicorn easily escapes.

Later as she sleeps, Mommy Fortuna (Angela Lansbury) spots her on the side of the road and recognizes the Unicorn for what she is. Fortuna captures her and places her in a cage with a spell on it so that she can not escape. The Unicorn is to be another prized attraction at her Midnight Carnival. While most of Fortuna’s caged beasts are are nothing more than normal animals with a spell on them to create the illusion they are mythical beasts, one is as real and immortal as the Unicorn; a vengeful harpy named Celaeno (Keenan Wynn).

Fortuna employs an incompetent magician named Schmendrick (Alan Arkin) who befriends the Unicorn. With his help, the Unicorn escapes her enchanted cage, and she frees the other animals. Once she frees the harpy, Celaeno kills Fortuna and her lackey, Ruhk (Theodore Gottlieb).

The Unicorn allows Schmendrick to travel with her on her quest to find the other unicorns as he has knowledge of the Red Bull and King Haggard (Christopher Lee), the ruler of a dreary kingdom who commands the fiery beast. Further along the path, the two must hide from local thieves. While the Unicorn escapes their notice, the thieves capture Schmendrick. They take him to their leader, Captain Cully (Keenan Wynn). Unbeknownst to him, the Unicorn helps Schmendrick conjure up the ghosts of Robin Hood and his Merry Men in the Captain’s camp. The Captain’s men run after Robin Hood, wanting to join him.

Schmendrick’s trick both frightens and irritates Captain Cully. He, and one of his men tie, him to a nearby tree. Schmendrick uses more of his faulty magic to free himself, but he accidentally brings the tree to life instead. The Tree (Nellie Bellflower) falls in love with him and nearly smothers him to death until the Unicorn arrives to save him. She uses her magic to free Schmendrick.

As they are about to leave, Captain Cully’s girlfriend/maid Molly Grue (Tammy Grimes) arrives. She sees the Unicorn for what she is and weeps in joy and anger; cursing her for coming to her as an older woman rather than a young maid. Molly joins the two in the quest for the unicorns, which displeases Schmendrick.

When the Unicorn nears King Haggard’s seaside castle, the Red Bull spots her and tries to herd her into the sea. Before it can, Schmendrick uses his terrible magic to transform her into a beautiful woman. The Unicorn’s appearance confuses the Red Bull, and it leaves. However, this sudden transformation brings fear to the Unicorn, and she demands Schmendrick return her to normal. He won’t do it because the Red Bull isn’t after a girl, and this form will allow her to finish her quest.

Schmendrick, Molly Grue, and the humanoid Unicorn finally make it to King Haggard’s castle. While Haggard invites them inside, he’s not very welcoming to the group. Schmendrick introduces the Unicorn as Lady Amalthea, and asks to become members of Haggard’s court. However, the only occupants of the castle besides Haggard are his adopted son, Prince Lír (Jeff Bridges), and four old men-at-arms. So it’s not much of a court. Haggard does replace his very competent wizard named Mabruk (Paul Frees) with Schmendrick, and he puts Molly Grue to work in his scullery. After he summons Mabruk to his throne room, the wizard quickly recognizes Lady Amalthea for what she truly is. He warns Haggard that by allowing the girl into his castle, he has invited his own doom, and he then disappears.

In short time, Lady Amalthea’s new human emotions begin to cause her to forget her true self. Soon, she falls in love with Prince Lír, and considers abandoning her quest in favor of mortal love. Haggard eventually confronts Amalthea; revealing that he’s always known her for what she really is. He tells her that the unicorns are kept just below sea level for his personal happiness. However, he notices the magic waning in her eyes, and somewhat doubts that she truly is more than what she seems.

Eventually, the castle’s cat (Paul Frees) reveals the location of the Red Bull’s lair via a little riddle she must solve. She and Schmendrick eventually do solve the puzzle and walk through a clock that leads to the bull’s den. Lír follows Molly, Schmendrick, and Lady Amalthea into it as Haggard destroys the clock; trapping them inside. The only way out now is through the Red Bull.

The Bull begins herding her toward the ocean just as it did to the other unicorns. Lír tries defending her, but the Red Bull easily kills him. Enraged, the Unicorn stands up for herself, and fights back. She forces it into the sea. The other unicorns then emerge from the water’s tides to stampede onto the shore and across Haggard’s castle. It collapses into the sea with Haggard, who has been watching from one of its towers the whole time, also falling into the waters below to his death. The Unicorn uses her magic to revive Lír before running off with the other unicorns.

With the King dead and the quest over, Lír sets out to an unknown future alone. As he’s about to ride off, Schmendrick consoles him; he’s gained so much in winning the love of a unicorn even if he feels he’s now alone in the world. Lír thanks him and rides away. Schmendrick asks Molly to go with him and she agrees.

Later the next evening, as the two sleep in their camp, the Unicorn returns to Schmendrick to give him her thanks for helping her even if she is the first unicorn ever to feel the sting of mortality and the pain of regret. Schmendrick apologizes but she tells him that she also learned to love, and there are also unicorns in the world again thanks to him. For that, she is grateful even if feels regret for leaving. Schmendrick and Molly watch as the Unicorn leaves to return to her home.