The Life of Emile Zola recounts the life of the French writer and social commentator of the titular name. It begins with his days as a struggling artist, sharing an apartment with Paul Cezanne, to the release of his first bestselling book, and beyond. We see his rise from poverty, to his forays into social and political commentary through his books all the way to his involvement in the Dreyfuss Affair. 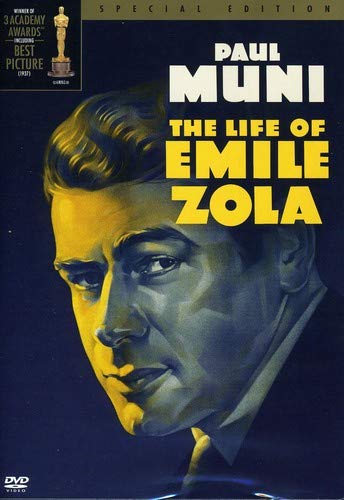 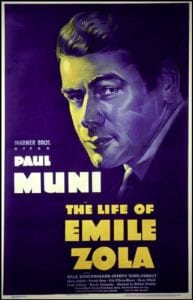 In The Life of Emile Zola, Emile Zola (Paul Muni) is a struggling writer sharing an apartment in Paris with his friend, Paul Cezanne (Vladimir Sololoff). Zola is a social observer who surprisingly finds success as the author of novels about injustice. Cezanne eventually thrives as a renowned Post-Impressionist painter. Picasso and Matisse said of Cezanne, “he is the father of us all.”

When they are older and prosperous, Cezanne reminds his friend Emile to continue striving for truth and justice. Zola uses the power of his pen to help Army Captain Alfred Dreyfus (Joseph Schilkraut) who was wrongly convicted of treason. Authorities leave Dreyfus to rot in the god-forsaken prison of Devil’s Island. Dreyfus’ wife Lucie (Gale Sondergaard) brings the case to Zola’s attention.

Even after irrefutable proof surfaces that Dreyfus is innocent and a Major Walsin-Esterhazy (Robert Barrat) was the culprit, the brass in the French Army refuse to rectify the injustice. The Army seems willing to do anything to avoid admitting their mistake. They even are willing to let the guilty Esterhazy get away with his crimes against the French Republic. The film neglects the issue of Anti-Semitism, which strongly influenced Dreyfus’ conviction.

Emile Zola prints a letter addressed to the French President in a prominent French newspaper titled, J’ Accuse. He clearly lays out his grievances with the Army and it’s treatment of Dreyfus. Zola experiences the wrath of the Army for himself when they accuse him of libel.

When they bring Zola to trial, the court severely limits his defense attorneys, and allows the army to bully the jury. Not surprisingly, the jury finds Zola guilty. He flees to London where he continues to publish articles demanding justice for Dreyfus.

The sins of Esterhazy eventually catch up to him and he flees. The Army has no choice but to reopen the Dreyfus Affair and exonerate him. The government clears him of all charges, and promotes him within the army. The Officers involved in the cover-up resign. Those who don’t, the government fire—some even commit suicide from the shame of it all.

Unfortunately, Emile Zola does not live to see Dreyfus’ vindication. He dies in his home of carbon monoxide poisoning while writing. The film ends with Zola’s funeral. There, he’s lauded for his bravery and success in fighting for truth and justice.