During Christmas time in 1183, King Henry II plans on announcing his successor to the throne. However, there’s a lot of people looking to take over the crown, though. Henry has three sons, but wants his son Prince John to ascend the throne. However, his wife, Queen Eleanor, has other ideas. She wants their son Prince Richard to be King. As family and other schemers gather for the holiday, each one tries to change King’s mind. 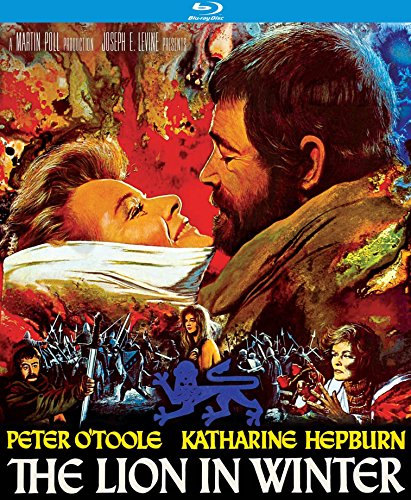 The Lion in Winter [Blu-ray]

‘The Lion In Winter’ Movie Summary 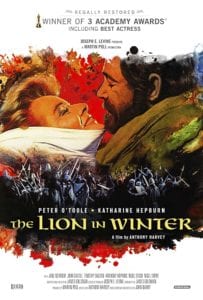 The Lion In Winter is the story of Henry II, king of Great Britain in the 12th century at a time when England and France finally have some sort of peace after the King of France dies, leaving the French kingdom in the hands of his 17-year-old son, Philip II, in whom Henry has invited to his castle. It is Christmas, and for the festivities, Henry has recalled his estranged, scheming, and outright rebellious queen wife, Eleanor of Aquataine, from her castle prison in the North of England.

Henry intends to announce the successor to his throne from his and Eleanor’s three capable but extremely flawed sons, who jockey for position through many covert and not-so-covert manipulations necessary to secure the throne for themselves. Richard is the favorite of Eleanor and the eldest son, who exemplifies all that is strong and powerful. Richard also has Eleanor’s beloved French Aquataine lands which she has given to Richard that are vital to Henry’s hold over France. Geoffrey is the middle son, who has made up for the lack of love from both his father and mother by becoming the most cunning, back-stabbing, scheming son who knows his only chance to seize the kingdom for himself is to get all factions warring against the other. John is the 17-year-old favorite of Henry’s with no experience, no passion, no skill, and is more suited to court jester than crown prince. In the middle of all this family drama, Henry’s sweet mistress, Alaice, is the sister of King Philip of France, and Philip demands Alaice marry Richard to guarantee peace within the kingdom, although Henry wants Alaice for himself despite wanting John on the throne.

As Henry welcomes Eleanor to her rightful place as queen, Henry and Eleanor exchange pleasantries that may as well be daggers in each others’ backs as they know all too well the meaning of this gathering. Eleanor is going to get the throne for Richard, and Henry is going to give the throne to John. As Henry welcomes Philip into court and starts negotiations over Alaice, her hand in marriage, and her lands to go to the next king of England, Henry offends Philip directly to his face to start them off on the wrong foot, although both parties know there will be more negotiating over the weekend.

Richard demands the throne as he is the strongest, but Henry will not give it to him over his love for John and Alaice. Philip demands Henry withdraw Richard’s troops from the French Aquataine for Alaice’s hand. John bumbles about with no skill at scheming or negotiating since he knows he is Henry’s favorite and is guaranteed the throne, even without a leader’s mentality. Geoffrey observes and needles all sides to see who has a weakness and how best he can exploit it. Eleanor cackles and manipulates and cajoles all boys and men into one fine boiled brew ready to boil over with rage and violence guaranteed no matter whom is chosen for the throne.

Henry tries giving John the throne by marrying Alaice to him, even though John and Alaice loathe one another, but Henry would have his favorite on the throne and his lover in his bed. But Geoffrey schemes with Philip to twist John’s mind into believing Richard will be chosen. Richard and Eleanor have a heart-to-heart where Richard tells her he knows he is the favorite but has never actually loved anyone in order to be the strongest. Eleanor promises her support to him if he keeps the Aquataine. Henry and Eleanor battle wits and in order to get the Aquataine, Henry threatens to marry Alaise to Richard, thus enraging John. Henry has no intention of marrying Richard and Alaise, but he calls them all together to make his point and Richard is appalled and refuses. John, Geoffrey and Philip scheme to merge their armies to fight Richard. Henry goes to soothe Alaise from her humiliation in front of everyone. John and Geoffrey go to Philip’s room to plan.

While there, Richard knocks at the door so Geoffrey and John hide behind a tapestry as Richard enters Philip’s room. Richard reveals not only that he will be the king, but that he also is in love with Philip, due to a past affair they had two years earlier in France. Before Philip can reply, Henry knocks at Philip’s door. Richard hides behind another tapestry as Henry enters. Philip has Henry right where he wants him. As Henry demands and belittles Philip, Philip makes sure to twist their words to include all three boys into the mix. When Philip reveals Richard as a homosexual, thus making him ineligible for the throne as well as potentially treasonous, Henry is appalled but he realizes he still has his beloved John as king. Then Philip reveals Geoffrey, who steps in to try to manipulate the situation for his benefit by revealing poor idiotic John who is scheming against him, thus killing Henry’s soul. Henry storms out and disowns all three boys. He grows old overnight.

Alaise finds him and Henry’s only realization is to have the Pope annul Eleanor with her lies, and marry Alaise and have more heirs through Alaise. But in order to do that, he imprisons all three of his sons and Eleanor in the castle in order to head to Rome with his army, otherwise all three princes will merge their armies and throw Henry out of England.

But before Henry can leave, Eleanor smuggles three daggers into prison for the princes as they wait for Henry to come, which he does. They all threaten to kill Henry, but Henry is the strongest and knows he will have to execute them all in order to secure the throne for Alaise’s heir. But Henry cannot go through with it and lets them escape as Henry and Eleanor stand together, knowing they have created a twisted, dangerous kingdom that only they can control. They walk out of the prison knowing nothing has changed but they know England will prevail as long as Henry is king.

The next morning, Henry sees Eleanor to her sailing vessel to sail back to her prison castle with Henry’s promise Eleanor will come visit again at Easter. Henry vows he will live forever and laughs as Eleanor waves while sailing into the distance.