Kern County Deputy Sheriff Joe “Deke” Deacon is sent to Los Angeles for what should have been a quick evidence-gathering assignment. Instead, he becomes embroiled in the search for a killer who is terrorizing the city. Leading the hunt, L.A. Sheriff Department Sergeant Jim “Jimmy” Baxter, impressed with Deke’s cop instincts, unofficially engages his help. But as they track the killer, Jimmy is unaware that the investigation is dredging up echoes of Deke’s past, uncovering disturbing secrets that could threaten more than his case. 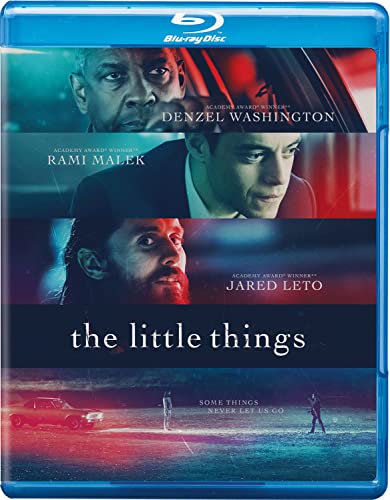 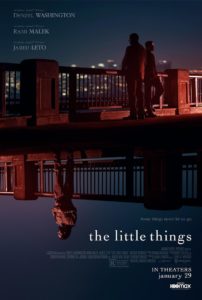 The film begins on a lonely stretch of road in Southern California one night in 1990. A young woman (Sofia Vassilieva) is driving by herself when she finds herself being stalked by a motorist in another car. She pulls over to a closed gas station on the side of the highway. The stalking motorist does the same. She runs through the desert trying to avoid the mysterious motorist who follows her with his bag and flashlight. She catches the attention of a passing truck driver and escapes an unknown fate with the stalker.

Some time later in Bakersfield, Kern County deputy sheriff Joe “Deke” Deacon (Denzel Washington) is directed by his captain Henry Davis (Glenn Morshower) to drive to the Los Angeles County Sheriff’s Department to collect evidence pertaining to a recent murder. Deke is a former L.A. County detective who left the agency under mysterious circumstances. His arrival at the Sheriff’s Office causes a mild stir. Newly appointed lead detective Jimmy Baxter (Rami Malek) is curious and invites Deke to assist him with a new murder scene. While at the scene, Deke notices similarities between the new murder and a series of murders that Deke was unable to solve when he worked as a detective. Jimmy is grateful for Deke’s assistance although his captain Carl Farris (Terry Kinney) warns Jimmy against taking Deke’s advice.

That night, a woman named Ronda Rathbun (Maya Kazan) is followed by a mysterious car while jogging and disappears. Her parents report her as missing the next day. Ronda’s parents share information with Jimmy that Ronda was last seen wearing a red barrette. Deke prepares to leave and return to Bakersfield, but while on the highway, he appears to be overcome with guilt and returns to assist Jimmy’s investigation. He takes vacation from his job and stays at a rundown motel in a bad area of Los Angeles and starts his own investigation into the most recent murder. At the same time, Jimmy learns from Farris that Deacon got divorced and suffered a heart attack due to his obsession with the unsolved cases. Farris advises Jimmy not to involve Deke in the investigation any further.

The next night, the police discover another body washed up beneath a bridge. Jimmy learns that the M.O. is consistent with the earlier murder and earlier killings from years before. The victims were all prostitutes that were stabbed to death. However, the body is not that of Ronda Rathbun. Based on Deke’s investigation, the police begin investigating Albert Sparma (Jared Leto), a suspect working at an appliance repair store in the proximity of the murders. Deke begins tailing Sparma, but Sparma notices Deke and confronts him. Jimmy and Deke decide to bring Sparma in for questioning. Sparma taunts the detectives in the interrogation room and causes Deke to lose his cool. The former detective nearly strikes the mysterious Sparma in front of Jimmy. Jimmy is forced to release Sparma as they have no evidence against him.

Jimmy is informed by Farris that the FBI will be taking over the investigation within the week since Jimmy has made little to no progress. Farris also informs Jimmy that Sparma confessed to a murder eight years before which he could not have committed since he was ten miles away from it when it happened. Farris warns Jimmy that Sparma is obsessed with crime and is an unreliable suspect. Desperate, Deke and Jimmy decide to break into Sparma’s apartment to find evidence. Jimmy calls Sparma and invites him to a bar under the pretense of making an apology. Meanwhile, Deke breaks into the apartment while Jimmy plays look out.

Sparma becomes wise to the officers’ ruse. He calls in an “officer down” call to 911 with his apartment as the address. Deke is forced to leave the apartment before he can thoroughly examine it. He barely escapes the responding officers. Jimmy watches from the street and notices that Sparma is present watching as well. Deke and Jimmy decide to tail Sparma everywhere he goes. They follow him to a strip club and back one night. While Deke goes out for coffee during an all-night stake out, Sparma contacts Jimmy. Jimmy demands to know where Rathbun is located. Sparma offers to drive him to where he supposedly hid her body, but states that he will only take Jimmy, not Deke. Jimmy agrees. Deke sees them leave and follows.

Sparma takes Jimmy to a remote area in the desert. He has the detective dig several holes in the ground. Deke waits some distance away. A short time later, Sparma confesses that he has never killed anyone. Jimmy is skeptical and continues digging, becoming more and more frustrated. Sparma begins to taunt him and Jimmy strikes Sparma in the face with the shovel, killing him. Deke finally moves in and finds Jimmy and Sparma’s body. A flashback reveals that Deke accidentally shot one of the survivors of his last murder case years before. Farris and the coroner, Flo Dunigan (Michael Hyatt), helped to cover up the murder and attributed the young girl’s death to the serial killer.

Deke tells Jimmy to dig a hole big enough to bury Sparma in the desert. Deke then leaves and proceeds to Sparma’s apartment. He empties the apartment of Sparma’s possessions. He then returns to the desert during the day. Deke finds that Jimmy has continued to dig for Rathbun’s body and has not buried Sparma as directed. Jimmy is still convinced that Sparma is the killer. Deke buries Sparma in the desert and tells Jimmy never to discuss Sparma’s name ever again and directs him to ask to be removed from the case. Deke tells Jimmy to forget about the case or it will haunt him for the rest of his life.

Some time later, Jimmy is at home on leave, watching his two girls swimming in the family pool. He seems lost and stares out into space. His wife Ana (Isabel Arraiza) brings him an envelope sent to him by Deke. Inside is a red barrette like the one Ronda Rathbun was wearing when she was abducted. Jimmy seems relieved. Back in Kern County, Deke burns everything he collected in Sparma’s apartment. The last thing he throws in the fire is a brand-new pack of barrettes that is missing the red barrette. Deke knows that he has freed Jimmy of the angst that he has gone through for years. The true serial killer is never revealed.