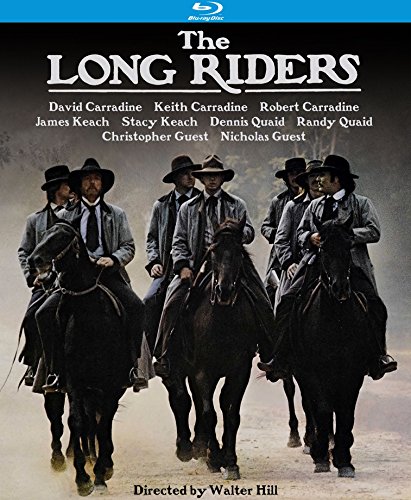 Brand New 4K Restoration! From the great Walter Hill (Extreme Prejudice) Jesse James and his gang of outlaws ride again in this extraordinary western that pulsates with hard-driving action and electrifying drama. Four sets of actor brothers David Carradine, Keith Carradine and Robert Carradine; James Keach and Stacy Keach; Randy Quaid and Dennis Quaid; Christopher Guest and Nicholas Guest each depict real-life siblings in this emotionally charged portrayal of the Old West’s legendary bandits. The notorious James-Younger gang is the most famous group of outlaws in the country, robbing banks, trains and stagecoaches with a sense of daring that makes them folk heroes throughout the land. But when the mighty Pinkerton detective agency swears to track them down, these criminals must face an awesome enemy that will stop at nothing to see them behind bars…or dead! Only through the strength of their loyalty and blood ties can the outlaws hope to survive the brutal pursuits, unexpected betrayals and blistering showdowns that mark the end of their dangerous ride.