Leda is a middle-aged divorcee devoted to her work as an English teacher and to her two children. When her daughters leave home to be with their father in Canada, Leda anticipates a period of loneliness and longing. Instead, slightly embarrassed by the sensation, she feels liberated, as if her life has become lighter, easier. She decides to take a holiday by the sea, in a small coastal town in Greece. But after a few days of calm and quiet, things take a menacing turn. Leda encounters a family whose brash presence proves unsettling, at times even threatening. When a small, seemingly meaningless event occurs, Leda is overwhelmed by memories of the difficult, unconventional choices she made as a mother and their consequences for herself and her family. The seemingly serene tale of a woman’s pleasant rediscovery of herself soon becomes the story of a ferocious confrontation with an unsettled past. (Courtesy of Netflix) 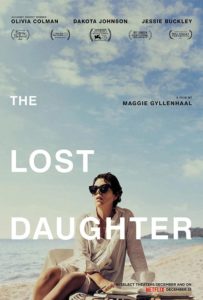 Middle-aged college professor Leda Caruso (Olivia Colman) is on a working vacation in Greece. Leda takes joy in her solitude until it is interrupted by a boisterous Greek family who interject themselves into Leda’s privacy. Nina (Dakota Johnson) is a young American girl who has married into the family. Nina has a small three-year-old daughter Elena (Athena Martin) who Nina pays reluctant attention to. Leda watches Nina from a distance but sees some of herself in the young mother.

One day, Nina and her husband Toni (Oliver Jackson-Cohen) get into an argument, and Nina loses sight of her daughter who wanders off. Everyone begins searching for Elena. However, it is Leda who finds the girl playing in the woods nearby. Nina expresses her gratitude to Leda, but she also expresses her growing exhaustion and general unhappiness with her role as a mother. Little Elena is distraught because her treasured doll has gone missing as well. In reality, Leda has taken the doll and hidden it because she saw Elena misusing and abusing the doll.

In flashbacks, a young Leda (Jessie Buckley) struggles being a young mother to her two daughters, Bianca (Robyn Elwell) and Martha (Ellie Blake). Young Leda is trying to further her own career while supporting her husband Joe (Jack Farthing), but her unruly girls constantly distract her despite her attempts to ignore them. She often loses her patience and becomes emotionally distant from her own daughters.

Back in the present, Leda has dinner with the proprietor for her vacation apartment, Lyle (Ed Harris). Leda is emotionally distant although Lyle shows some interest in the college professor. After dinner, the two talk for a few hours. Lyle stops to have a cigarette on Leda’s balcony. He notices Elena’s doll but does not comment on it to Leda. Not long afterwards, Leda accidentally sees Nina and Will (Paul Mescal), an assistant at the resort, engaged in a romantic tryst. Leda leaves without revealing herself to either, but Nina is aware that Leda saw them. Nina explains that her husband is very controlling, and she engaged in the affair with Will to give her some joy. At the same time, Nina and her family place flyers up around the resort seeking Elena’s doll. Despite the flyers, Lyle does not alert Nina or her family that Leda has the doll.

Soon after, Leda encounters Nina in the market. Leda buys the young mother a hatpin to help her hold her hat in place. Nina asks Leda about her daughters, and Leda becomes emotional. Leda reveals to Nina that she abandoned her daughters for three years after she became overwhelmed with being a mother and pursuing her career. Nina asks how Leda how it felt, and surprisingly, Leda tells her that she felt amazing. Leda tells Nina that she went back to her daughters because she really missed them.

In another flashback, Leda is offered a job at a college and leaves her daughters with her husband. During her time away, Leda begins an affair with an esteemed colleague, Professor Hardy (Peter Sarsgaard). While away from her family, Leda enjoys the time to herself and the fulfillment she receives from the recognition for her hard work from colleagues and Professor Hardy. Leda’s marriage suffers and eventually she decides to leave her husband. Her husband and her daughters beg her to stay, but Leda leaves with a small smile on her face. Her husband takes Leda’s girls and goes to live with Leda’s mother.

Back in the present, Will asks Leda if he and Nina can borrow her apartment to have sex. Leda reluctantly agrees. The next day, Nina arrives at Leda’s apartment to collect the keys. Leda confesses to being a selfish and unnatural mother to her daughters. Leda warns Nina that her depression will never go away. Leda also gives Nina Elena’s doll and confesses to taking it. Leda informs Nina that she was “just playing.” Nina reacts angrily towards Leda and stabs the older woman in the stomach with the hairpin before leaving the apartment. Leda packs her bags and leaves the resort in her car. Leda inadvertently drives off the road due to the pain from her stomach. Leda climbs out of the car and stumbles towards the beach. She collapses near the water.

The next morning, Leda awakes as the surf hits her body. She sits up and calls her now adult daughter Bianca (Ellie James). An adult Martha (Isabelle Della-Porta) happens to be at her sister’s home for a visit. Leda’s daughter express relief to hear from their mother, informing her that they thought she might have died. Leda tells her daughters that she is very much alive. Leda finds an orange in her hand, and she begins peeling the skin off like a snake the way she used to for her daughters when they were little. The audience is unclear whether this is actually happening or whether this is Leda in the afterlife.