The Mask of Dimitrios begins as the body of Dimitrios Makropoulos washes onto an Istanbul beach. The man was stabbed and drowned. When the investigating office, Colonel Haki, meets a Dutch writer named Cornelius Leyden at a party, he tells him the story of the criminal. Quite intrigued, Leyden decides to investigate the story to use as a basis for his next novel. When he abruptly meets the mysterious Mr. Peters, he gets more than he bargained for in this tale of murder and intrigue. 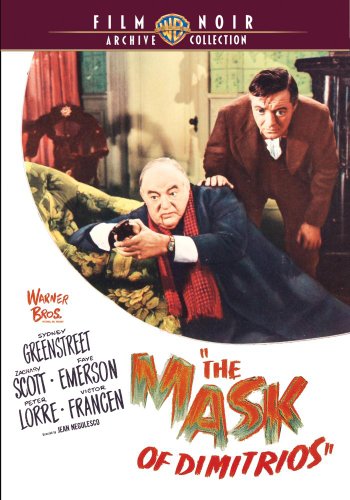 Mask Of Dimitrios, The

‘The Mask of Dimitrios’ Movie Summary 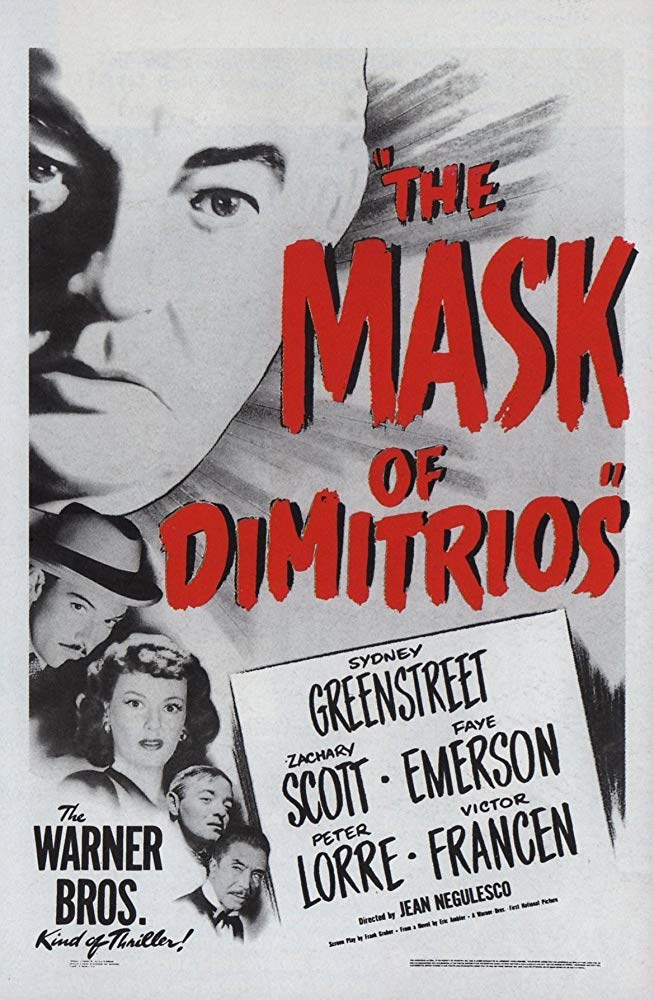 The Mask of Dimitrios takes place in Istanbul, ca. 1938 where some children find a bloated dead body on a beach. The police arrive, and ID the victim as Dimitrios Makropoulos (Zachary Scott) based on a patch with his name on the inside of the victim’s coat.

Colonel Haki (Kurt Katch) of the Turkish police notes that Dimitrios died of a stab wound to the stomach. He further laments that he wasn’t able to catch the man alive after following him for over two decades. The authorities weren’t ever able to arrest him or even get a photograph of him. However, he closes the case, and orders the burial of the body.

Later that night, the Colonel attends a dinner party where the visiting Dutch mystery writer, Cornelius Leyden (Peter Lorre) relaxes. A huge fan of his, the Colonel immediately strikes up a conversation with Leyden to see if he’s interested in Dimitrios’ case. With Leyden’s curiosity piqued, Haki tells him of how he first came to know of Dimitrios back in 1922.

Escape of the fig packer

There’s a flash back of Dimitrios as a lowly fig packer in Smyrna in dire need of money so he can escape the country. He finds that money in a corrupt business man named Konrad (David Hoffman), whom he intends to rob. He recruits a not-so-bright stooge named Abdul Dhris (Monte Blue) to come along with him to Konrad’s abode as his muscle. However, as Abdul holds Konrad, Dimitrios stabs the victim multiple times. The men then rob him and flee.

Later at a restaurant, Abdul throws his part of the loot around too loudly—buying everyone drinks. This attracts the attention of the police, and they arrest him for Konrad’s murder. He’s tried and hung for the murder, but not before he gives up Dimitrios’ name in the process. Dimitrios, for his part, safely escapes to Athens.

Leyden begins his investigation into the life of Dimitrios

Knowing that Dimitrios’ story would make a good basis for a book, Leyden travels to Athens to learn more about the man at the Bureau of Records. From an alias he was known to use, Leyden learns that he indeed was wanted for attempted murder in Smyrna which matches the Colonel’s story. He then boards a train to Sophia to continue his investigation.

On the train, a large man with impeccable manners joins his sleeping car named Mr. Peters (Sydney Greenstreet). This is now the third time we have seen Mr. Peters in the film—once at the Istanbul hotel, and again in Athens at the Bureau. Each time Dimitrios’ name is seen or mentioned, Mr. Peters gets angry, but as of now, we do not know his intentions.

He engages in a brief conversation with Leyden before Leyden decides to go to sleep. Peters stays awake to read his book Pearls of Everyday Wisdom. The next morning, Peters tells Leyden that “There is not enough kindness in the world,” and recommends a nice hotel to stay in Sophia. Leyden thanks him, and then wonders to himself how Peters knew his name as he never told him it.

The tale of Irana Preveza

In Sophia, Leyden’s friend, Marukakis (Eduardo Ciannelli), who is a writer for a Parisian newspaper, repays Leyden for his hospitality from back when he visited Amsterdam. He does so when he introduces Leyden to a very attractive woman named Irana Preveza (Faye Emerson) at the cabaret she works at. She’s the only person in town who knows who Dimitrios is. Cordial at first, Irana becomes quite bitter and standoffish once she hears Dimitrios’ name. She asks them to leave before changing her mind, and telling Leyden her story about Dimitrios from when they met in 1923 in another flashback.

Back then, Dimitrios was starving and broke. His landlord was about to call the police on him for not paying rent when Dimitrios’ attempted to blackmail the man. It failed, and the landlord gave him 24 hours before he called the cops. Dimitrios then affably forced his way into Irana’s apartment, and into her heart. Seeing he hasn’t eaten in quite sometime, she gives him some food and a little money. The next day he returns with a brand new suit, a large sum of money. He pays Irana back with interest using the money her blackmailed from her rich but very married lover.

Even though she knows he’s a scoundrel, she falls in love with him anyway. However, Dimitrios is a criminal for hire, and after he botches a job to assassinate the head of Bulgaria, he must immediately flee the country. He borrows a huge sum of money from Irana after he tells her to lie to the police over his whereabouts for the day, and then leaves. She neither sees him again, nor gets the money back he borrowed. She still seems to love the guy though.

After the story, Leyden returns to his hotel room where he finds it ransacked. Mr. Peters comes up to him with a pistol in his hand. He apologizes for the mess as he didn’t expect him back so soon. He’s extremely curious to know what Leyden knows about Dimitrios, but he won’t say why just yet. Leyden tells him the truth even though Peters doesn’t quite believe him. However, he’s very interested when Leyden tells him he saw Dimitrios’ body.

Peters then proposes an alliance that will enable the men to share half a million French francs using the information the two of them possess on Dimitrios. Leyden is pretty much noncommittal at this point, but he tentatively accepts. Peters sends Leyden to Geneva to meet a former spy named Wladislaw Grodek (Victor Francen). He claims that Grodek knows what Leyden wants better than anyone else.

Once in Geneva, Leyden gives Grodek an introduction letter from Peters. Grodek reveals in another flashback how cruel Dimitrios really was. In Belgrade 1926, Dimitrios befriends a clerk named Karel Bulic (Steven Geray) at the Ministry of Marine so he can commit espionage for Italy. He needs to steal documents of a minefield operation, and this clerk is the perfect pigeon he needs to do it.

He tricks Bulic into thinking some useless information he got for Dimitrios helped him win a government contract. Dimitrios pays him 20,000 dinar for the trouble, and then invites Bulic and his wife to dinner at a very expensive that night. There, he and Grodek team up to get Bulic to gamble his money. He not only loses it all, but is 5,000 dinar in the hole. With no way to pay it back, Dimitrios forces Bulic to steal the needed documents of the operation for him, but it pays 50,000 dinar.

Knowing he’s been duped, but with no options, Bulic agrees to help. He gives the men the documents, and Grodek takes photos of them. However, Dimitrios double-crosses him too. He robs Grodek at gunpoint of the camera with the photos of the documents on it. He then heads out to sell the photos to the highest bidder himself.

Unfortunately for them, the Yugoslavian authorities caught wind of the theft, and changed the operation—the information was now useless. Bulic, for his part, gave the 50,000 dinar he earned from the job to his wife before confessing everything to the Yugoslavian military. Unable to live with the betrayal to his country, he committed suicide shortly after.

Leyden next goes to Paris to meet Peters who is waiting for him there. Peter’s tells him that Dimitrios faked his death, and the dead man he saw in Istanbul is/was a member of their smuggling ring Dimitrios double-crossed. His name was Constantine Gullus. He was in Istanbul to kill Dimitrios, but it didn’t work out for him. Dimitrios is actually alive and well in Paris.

Peters plans to blackmail Dimitrios for a million francs in return for their silence in the matter of his faked death. Leyden doesn’t want the money, but he continues to help Peters because he likes the big guy. Peters sends Dimitrios a letter that he wants to meet with him at his Parisian apartment.

When they meet him, he’s quite short with the two—especially once Peters tells him he wants a million francs. Dimitrios begrudgingly agrees, and then leaves. As the two leave shortly after, one of Dimitrios’ hitmen follows the two. However, they manage to evade the killer on a train that’s departing.

With no other options, Dimitrios pays Peters the money, and when Peters returns to his swanky hideout, he’s giddy with excitement. However, Leyden doesn’t want anything to do with it. He’s only ever wanted to just write a book.

Suddenly, Dimitrios appears in the doorway, and shoots Peters. He turns to Leyden, but in a rage, Leyden knocks the gun out of his hand before wrestling him to the ground. Peters, not dead, gets the gun, and points it at Dimitrios who now begs for his life. Leyden leaves to get the police, and we hear gun shots off screen.

Peters emerges smiling—the money no longer interests him as he happily killed Dimitrios. The police arrive to arrest him as he tells Leyden to write his novel and send him a copy. He will have a lot of time to read it now where he’s going.