In 1999, Thomas Anderson lives an ordinary life, but feels something’s not right in it. A software techie by day and a computer hacker by night, he sits alone at home by his monitor, waiting for that something to reveal itself. One night, a mysterious woman named Trinity seeks him out, and introduces him to that faceless character he’s unknowingly been waiting for; a man named Morpheus. Morpheus tells the young Thomas the truth about his world, and Neo is born. Now he helps to free humanity from an unknown enemy’s control. 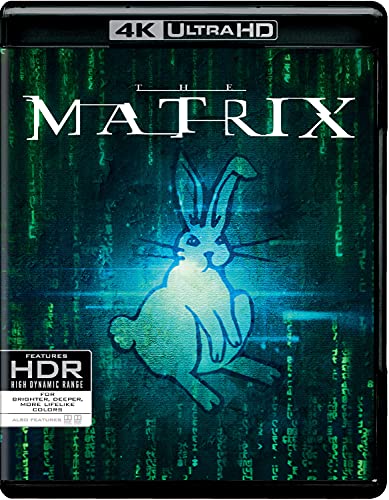 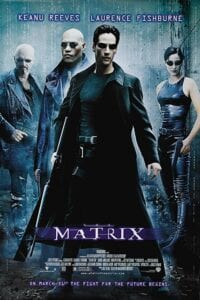 The Matrix begins with a squad of police officers surrounding a building where they believe a computer hacker by the name of Trinity is currently hiding. A mysterious group of “agents” show up and chastise the police commander for not waiting for them before entering the building, due to the dangerous nature of their suspect.

We then jump inside where Trinity takes down a squad of police officers before going on the run from the “agents”, across the roof tops of the mysterious city. Trinity eventually makes it to a phone booth, seconds before the phone booth is plowed over by a Mack truck driven by one of the “agents”. When the “agents” examine the wreckage, they do not find Trinity’s body and state that she has escaped, but that they have found the one she is looking for.

The film then jump cuts to Thomas Anderson, a computer programmer by day and a computer hacker by night who goes by the name of Neo. Anderson is played by Keanu Reeves in all his Keanu glory. Neo is receiving mysterious computer messages that tell him to “follow the white rabbit”. After encountering someone with a white rabbit tattoo on her body, he follows her to a techno club where he meets a very much alive Trinity.

Trinity tells him that Morpheus, an infamous terrorist hacker, wants to meet Neo, and the young hacker is very interested. However, before that meeting can take place, Neo is arrested at work the next day and interrogated/tortured by agents. Fortunately, the agents release Neo (along with a little electronic bug), and Neo is able to keep his date with Morpheus.

Morpheus tells Neo that he is living in a dream world, and he can choose to leave it, if Neo so wishes it. Choosing to continue to follow the rabbit hole, Neo takes a red pill, and his reality begins to disintegrate. Neo awakens, naked and weak, in a liquid-filled pod, with cables attached all over his body. He sees thousands of similar tubes all around him before a machine comes down and disconnects him from the pod. Neo is then flushed out with the refuse where he is eventually picked up and brought aboard Morpheus’ hovercraft, the Nebuchadnezzar.

Once there, Morpheus begins to explain what the Matrix is. Neo is told that in the 21st century, that the humans of the planet fought a war with machines that had become self aware. As part of this war, the humans had blocked the skies, to prevent the machines from using solar energy. As such, the machines had to find alternative means for the power that they needed to survive, so they created the Matrix. The Matrix is a cyber reality that allows the machines to use human beings as an energy source, or a battery as it is explained in the movie.

In the Matrix, humans believe that they are living in the year 1999, and that they are in control of their lives, with no memory of the human/machine world. Morpheus explains that he is responsible for “unplugging” enslaved humans, and returning them to the real world. Morpheus further explains that there is a prophecy that one such freed person will end the war with the machines, and that he believes that Neo is that person.

The film then goes into the education of Neo for his adventures in the Matrix world. Because the Matrix is a computer program, Neo is told that they have the ability to do superhuman feats since they can bend the physical laws. However, if a person is killed in the Matrix, they will die in the real world as well. Neo is also warned that everyone who has ever taken on an agent has been killed.

Ultimately, Neo is taken by Morpheus to see the Oracle, who will, in theory, confirm whether Neo is indeed the Christ figure of this film. The bad news is that the Oracle tells Neo he is not the one. The worse news is that she tells Neo that Morpheus will die to protect Neo because of his beliefs, unless Neo sacrifices his life for Morpheus.

The good news…Neo gets a delicious cookie. As Morpheus’ crew heads back to the extraction point, they are met by policeman and agents, who have been tipped to the crew’s Matrix-world arrival by their own personal Judas, Cypher. Everyone but Morpheus escapes, but Cypher makes it back to the real world hovercraft first. There he begins killing the other members of the crew by unplugging them while their minds are trapped in the Matrix. Before he can kill Trinity or Neo, a computer monitor by the name of Tanks kills Cypher and saves the duo.

Morpheus is taken to the agents’ headquarters, where they plan to torture him and interrogate him in order to get the access codes to the mainframe computer in Zion, the humans’ last stronghold in the real world. Neo decides to go back into the Matrix in order to save Morpheus, and Trinity tags along for the ride. The duo encounter overwhelming numbers, but they manage to free Morpheus and make their escape. Morpheus and Trinity are able to make their escape from the Matrix, but Neo becomes trapped when Agent Smith destroys his exit. Neo thinks about running from the agent, but he begins to believe in the prophecy and finds confidence in his abilities.

Neo and Agent Smith fight. Spectacularly. But ultimately, Neo has to get out of the Matrix, so he goes on the run trying to find another exit while being pursued by three agents. Tank attempts to lead Neo to an exit and safety, but Agent Smith cuts him off and places several bullets into Neo’s chest, killing the hacker.

However, as the agents begin to walk away, Neo resurrects and is now completely aware of his abilities and his power. He stops the bullets from the agents’ guns with a wave of his hand, and destroys Agent Smith by jumping into his “code” and blowing him up. Neo makes his escape from the Matrix, returning to the real world just in time before the hovercraft crew blows up an EMP that would have killed Neo if he had stayed in the Matrix.

The film ends with Neo making a call to the Matrix, stating that he knows that they are afraid now. Neo tells them that he will show their human prisoners “a world where anything is possible” before hanging up the phone. Neo then Superman’s off the screen, essentially creating the first cyber-world super hero.