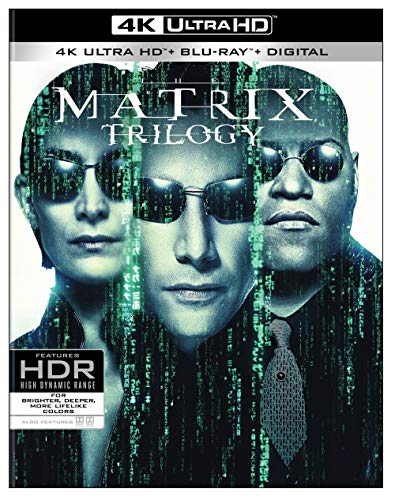 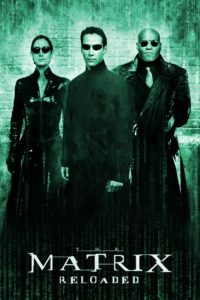 Six years after the events of The Matrix, the war between the remnants of humanity and the machines continues. Neo (Keanu Reeves) and Trinity (Carrie-Anne Moss) are romantically involved and still serving along with their captain, Morpheus (Laurence Fishburne). Morpheus receives a message from Captain Niobe (Jada Pinkett Smith) that summons all captains for a meeting in the Matrix to relay a message for all ships to return to the secret human base of Zion. Zion has confirmed the last transmission of the Osiris detailed in the Animatrix animated film. The transmission indicates that an army of Sentinels are tunneling towards Zion and will reach the no longer secret city within 72 hours. The commander of the human forces, Commander Lock (Harry Lennix), wishes for all ships to return to coordinate a united defense against the machines. Morpheus asks the captains in the Matrix for one ship to remain at broadcast depth to contact the Oracle (Gloria Foster), who has not been seen or heard from in sometime. Captain Ballard (Roy Jones Jr.) volunteers to remain behind with his ship, the Caduceus, to wait for a sign from the Oracle. Neo ends the meeting suddenly when he informs everyone that agents are on their way. Neo fights the agents (Daniel Bernhardt, David A. Kilde, and Matt McColm), who are sent there by Agent Smith (Hugo Weaving), an agent who now has free will.

Morpheus and his crew return to Zion on Morpheus’ ship, the Nebuchadnezzar. Morpheus and Lock openly disagree on what the best defense of Zion is, with Morpheus believing in the prophecy of the One and Lock believing in a more practical solution. Morpheus is invited to speak at a gathering of the community, and he informs them of the approaching machines, but conveys his belief that they will be victorious. Neo is disturbed by a reoccurring dream of Trinity’s death in the Matrix and is uncomfortable with prophesized role as savior. Meanwhile, the Caduceus receives a message from the Oracle. However, one of the crew members, Bane (Ian Bliss), encounters Smith, who absorbs Bane’s avatar and converts it into a Smith clone. The Smith/Bane then uses the phone line to leave the Matrix and gains control of Bane’s real body.

Upon word of the Oracle’s message, Morpheus and his crew return to the Matrix so that Neo can talk to the Oracle. Neo meets the Oracle’s bodyguard Seraph (Collin Chou) who takes him to the Oracle. The Oracle informs Neo that she is part of the Matrix, which causes Neo to distrust her and her advice. The Oracle directs Neo to reach the Source of the Matrix with the help of the Keymaker (Randall Duk Kim) if he wishes to save humanity. The Oracle directs Neo to contact the Merovingian (Lambert Wilson) for information concerning the Keymaker’s location. As the Oracle and Seraph leave, Smith arrives. He informs Neo that after Neo defeated him, he refused to be deleted and became a rogue program. He shows Neo his ability to clone himself by attempting to absorb Neo. Neo resists and Smith summons dozens of his clones to assist him. Ultimately, Neo simply flies away after the Smiths’ numbers turn overwhelming.

Choice is an illusion created between those with power and those without. Merovingian (Lambert Wilson)

Later, Neo, Morpheus, and Trinity visit the Merovingian in a posh restaurant in the Matrix. They learn that the French program has the Keymaker imprisoned and has no intention of sharing his hostage with them. The Merovingian’s wife, Persephone (Monica Bellucci), decides to help the humans as revenge for her husband’s infidelity. Her price…a passionate kiss with Neo much to the chagrin of Trinity who is made to stand and watch. Persephone leads the trio to the Keymaker but allows her husband’s guards to leave to notify the Merovingian of her actions. The Merovingian soon returns with his henchmen and two programs known as the Twins (Neil Rayment and Adrian Rayment) who have the ability to pass through matter. Neo fights the henchmen in the Merovingian’s mansion while Trinity and Morpheus flee the building with the Keymaker. They are pursued by the Twins. The pursuit moves to a busy a freeway and is joined by Agents. After a long chase, Morpheus defeats the twins, but he and the Keymaker need to be saved by Neo from a massive explosion. Trinity escapes the freeway on her own.

Morpheus’ crew meets with the crews of the Vigilant and Logos. The three crews come up with a plan to help the Keymaker and Neo reach the source. The Logos crew will destroy a power plant while the Vigilant crew will disable a back-up power station so that a security system that protects the Source will not be triggered, and Neo can open a secret door to the Source. Neo asks Trinity to stay on the ship and out of the Matrix based on his reoccurring dream which she agrees to do.

The Logos crew is successful, but the Vigilant is destroyed by a Sentinel in the real world which kills the crews’ avatars in the Matrix. Trinity enters the Matrix and completes the Vigilant’s mission. However, she is pursued by an Agent. She leaps out the window of the skyscraper and is shot by the Agent as she plunges towards the ground, just as in Neo’s dream. At the same time, Neo, Morpheus, and the Keymaker attempt to reach the source but are ambushed by Smith and his clones outside the door to the Source. Neo and Morpheus fight the clones and get to the door to the Source. The Keymaker unlocks the door, but he is shot dead by the Smith clones before he can get the door closed. The Keymaker gives Neo one last key to the Source before passing away.

Neo enters the Source and encounters the Architect (Helmut Bakaitis), the creator of the Matrix. The Architect explains that Neo is integrated with a program and is an essential part of the Matrix, which is now in its sixth iteration. He explains that Neo is designed to stop the Matrix’s fatal system crash that naturally recurs due to the concept of human choice within it. The Architect informs Neo that he has a choice: either return to the Source to reboot the Matrix and pick survivors to repopulate the soon-to-be-destroyed Zion, as his five predecessors all did, or cause the Matrix to crash and kill everyone connected to it, which would result in humanity’s destruction when Zion is destroyed. Neo learns of Trinity’s situation and chooses to save her instead of returning to the Source.

Neo flies to save Trinity and catches her before she hits the ground. Neo then uses his abilities to remove the bullet from her heart and revives her. Trinity and Neo return to the real world just as the Nebuchadnezzar is attacked by Sentinels. The ship is destroyed, but the crew safely escapes before its destruction. Neo uses his power to disable the machines with his thoughts, something that he has not ever been able to do in the real world. Afterwards, Neo falls into a coma. Morpheus’ crew is rescued by another ship, the Hammer. Its captain, Roland (David Roberts), notifies Morpheus that the other ships set up for Zion’s defense were entirely wiped out due to someone prematurely activating an EMP. Roland tells Morpheus that only one survivor was found, the unconscious Smith/Bane who now lies next to the unconscious Neo.