In the third film of the Matrix film series, Neo lies in a coma after the events of the previous film. Morpheus and Trinity try desperately to save him. Meanwhile, the evil program Agent Smith continues to expand his influence with plans to take over not just the Matrix, but the real world as well. At the same time, the machine drills reach the last human city of Zion. While humanity battles against the machines under the Earth, Neo turns to an unlikely ally, the machines themselves, to battle the true enemy…Agent Smith. 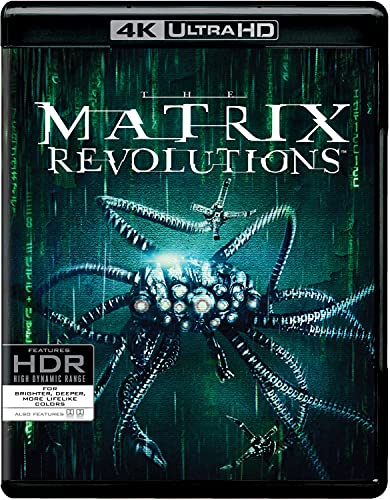 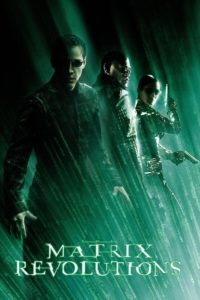 The film picks up immediately following the events in The Matrix Reloaded. Neo (Keanu Reeves) and Bane/Smith (Ian Bliss) both lie unconscious in the medical bay of the Hammer. Although not connected to any machines, Neo’s consciousness remains active in the Matrix. However, he finds himself trapped in a subway station named Mobil Avenue, a transition zone between the Matrix and the Source, the machine mainframe. At the station, Neo meets a family of programs, including a young girl named Sati (Tanveer K. Atwal). Sati tells Neo that he is not supposed to be at the station. Sati’s father tells Neo the subway is controlled by the Trainman (Bruce Spence), a program loyal to the Merovingian (Lambert Wilson). Neo tries to board the train with the family when the Trainman arrives, but the program refuses and throws Neo off before leaving.

Meanwhile, Morpheus (Laurence Fishburne) and Trinity (Carrie-Anne Moss) reenter the Matrix to help Neo. They encounter Seraph (Collin Chou) who informs them of Neo’s confinement at the station. Seraph informs them that the Trainman works for Merovingian and the trio enter Club Hel to force the French program to let them free Neo, which they do. Once free in the Matrix, Seraph takes Neo to visit the Oracle (Mary Alice) who has taken a new shell since the last film. The Oracle informs Neo that Agent Smith (Hugo Weaving) intends to destroy both the Matrix and the real world. She informs Neo that everything that has a beginning has an end, and that the war will come to a conclusion. Immediately after Neo leaves, a large group of Smith clones enter the apartment and assimilate Sati and Seraph. Smith gains the Oracle’s power of precognition during the assimilation.

Back in the real world, the crew and passengers on the Hammer find and reactivate Niobe’s (Jada Pinkett Smith) ship, the Logos. Suspicious of the now conscious Bane/Smith, the crews interrogate the only survivor of the massacre that occurred at the end of the last film. Bane/Smith lies and states that he has no recollection of what happened. Niobe, Morpheus, and Roland (David Roberts) plan their defense strategies for Zion. Neo interrupts and requests one of the ships so that he can travel to the Machine City. Roland refuses, but Niobe offers him the Logos. Trinity joins Neo, and the couple depart for the Source, unaware that Bane/Smith has stowed away on the ship. Bane/Smith takes Trinity hostage, and Neo must come and save her. Neo realizes that Bane has been assimilated by Smith and the two men fight. Bane/Smith burns Neo’s eyes out with a power cable, blinding him. Without his eyes, Neo discovers that he can perceive anything as part of the machine source code. He sees and kills Bane/Smith. Neo and Trinity continue with their journey to the Machine City.

Everything that has a beginning has an end. I see the end coming, I see the darkness spreading. I see death. The Oracle (Mary Alice)

Meanwhile, Niobe and Morpheus speed toward Zion in the Hammer in order to help the human survivors. A machine drill penetrates the protective barrier around Zion which allows thousands of Sentinels to enter with the intent to eliminate the remaining humans. The ground forces are led by Captain Mifune (Nathaniel Lees) in his group’s metal walkers. Mifune is supported by runners who rearm the walkers when they run out of ammunition, including one teenager known as the Kid (Clayton Watson), who was freed from the Matrix by Neo during the Animatrix animated film. The walkers are slowly decimated, and Mifune is mortally wounded. Before dying, Mifune instructs the Kid to open the gate for the Hammer so that the ship can discharge its EMP and disable all the machines around Zion. The Kid is successful, and the EMP is activated. The Sentinels are rendered useless, but the machines send another wave of Sentinels to finish the job. The human survivors are forced to retreat into the natural cave system to make their intended last stand.

Back on the surface, Neo and Trinity near the Machine City. Their ship is attacked by thousands of missiles despite Neo attempting to control them. The Logos crashes, and Trinity is fatally impaled on some of the wreckage. Neo continues on and enters the Machine City alone. Once there, he encounters Deus Ex Machina (Kevin Michael Richardson), the machine leader. Neo warns the machine that the program Smith intends to conquer both the Matrix and the real world. Neo offers to stop Smith in exchange for a peace with Zion. The machine leader agrees to Neo’s terms and the Sentinels temporarily stop attacking Zion.

Neo reenters the Matrix and discovers that it is entirely populated with Smith clones. The Smith clone with the Oracle’s powers steps forward and tells Neo that he has foreseen his victory. Smith and Neo fight throughout the Matrix as the other Smith clones merely watch. Smith continues to beat Neo repeatedly. Neo realizes that there is no other way to win and allows Smith to assimilate him. Once assimilated, the Neo/Smith is connected directly to the Source, and the machine leader sends the deletion signal to the Smith program through Neo’s body in the real world. All the Smith clones in the Matrix are destroyed. Honoring the agreement, the Sentinels withdraw from Zion. Morpheus and Niobe embrace. Neo’s deceased body is slowly carried away and cradled by the machines.

Soon after, the Matrix is rebooted. The Architect (Helmut Bakaitis) visits with the Oracle in a park. They discuss the peace treaty and agree that any humans who desire to leave the Matrix will be allowed to do so. Sati is playing nearby and points out that she created a beautiful sunrise over the horizon in Neo’s honor. When questioned by Sati about Neo’s fate, the Oracle tells the young girl that she thinks they will see Neo again someday. Seraph approaches and asks the Oracle if she knew what would happen. The Oracle replies that she did not know, but she believed.