The Midnight Sky takes place in the distant future of 2049. The post-apocalyptic tale follows Augustine Lofthouse, a lonely scientist in the Arctic who suffers from a terminal illness as he desperately races to contact and stop Dr. Iris “Sully” Sullivan and her fellow astronauts from returning home to a mysterious global catastrophe. 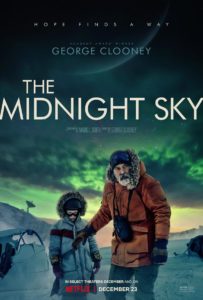 The year is 2049. A cataclysmic event has wiped out most of the life on Earth with powerful radiation. The survivors of the event have either retreated underground in the hope that they can wait out the radiation or retreated to the poles where the radiation is slow to move towards. Scientist Augustine Lofthouse (George Clooney) volunteers to stay at a base in the Arctic while the last of the base’s staff and family members evacuate to an underground bunker. Augustine is suffering from a serious illness that requires daily dialysis, so he does not believe that he will survive long anyways. Augustine wishes to stay so that he can contact any returning spaceships to warn them about the situation on Earth so that they can alter course to the habitable moon K-23 near Jupiter. Augustine constantly tries to contact ships, but his antenna is too weak for his signal to reach them.

Thirty years before, Augustine (Ethan Peck) was an ambitious scientist who was working on discovering habitable planets where humanity could expand. One night, he meets Jean Sullivan (Sophie Rundle) at a gala and the two begin a romantic relationship with each other. After a pregnancy scare, Jean leaves Augustine due to his obsession with his work. Several years later, Augustine encounters Jean again by chance and discovers that they have a daughter together. However, Augustine chooses not to introduce himself when given the chance.

Back in 2049, the space craft Æther is in the process of returning to Earth from Jupiter from K-23, which was discovered by Augustine. The crew is unaware of the catastrophe on Earth. Æther is captained by Commander Adewole (David Oyelowo) who is in a romantic relationship with one of his crew, Sully (Felicity Jones), who is pregnant with their child. The rest of the crew is made up of flight engineer Maya (Tiffany Boone), pilot Tom Mitchell (Kyle Chandler), and mission specialist Sanchez (Demián Bichir). The crew is concerned about their lack of communication from Earth but presses on with their mission anyways.

Back on Earth, Augustine finds a young girl (Caoilinn Springall) in the station who does not speak. Augustine suspects she was left behind by the people who vacated the station and tries to call them back to take her, but he is unable to contact them and suspects that they are dead. She communicates through her drawings and Augustine learns her name is Iris. Over time, Augustine grows fond of Iris, and eventually the two set off for another base in the Arctic hoping that the antenna will be powerful enough to contact Æther. During their journey, Augustine loses his dialysis equipment, condemning him to death. Arriving at the base, he manages to contact Æther briefly, before the starship is hit by a meteor shower.

On Æther, the meteor shower damages the radar and communication systems, leaving them deaf and blind. To fix the ship, Sully, Adewole, and Maya conduct a spacewalk to repair their damaged systems. They fix the radar and communication systems but are caught in the middle of a second meteor strike as it hits the ship. Maya is injured during the meteor shower and despite Sanchez’s best efforts to save her, she dies a few moments later in the air lock. Sully reestablishes contact with Augustine, who tells the remaining crew of Æther that the Earth is uninhabitable and that they need to return to K-23 to start a new life.

Tom receives a delayed message from his wife (Miriam Shor) who informs him that his two sons are sick and that they are evacuating to an underground bunker. Tom decides that he will not return to K-23 but instead will take one of the escape pods down to Earth to find his family. Sanchez, who saw Maya as a second daughter, decides to accompany Tom to Earth to bury her body. The two set off back to Earth while Sully and Adewole plot their course back to K-23.

Sully communicates one last time with Augustine. She thanks him for his plans for them to return to K-23 and for inspiring her to join NASA. Sully informs Augustine that her mother was Jean Sullivan and that her full name is Dr. Iris Sullivan. Augustine realizes that Sully is in fact the daughter he had with Jean thirty years prior. Augustine also realizes that the young Iris in the base with him is merely a hallucination. Before losing contact with her, Augustine tells Sully that he is proud to have finally met her and has Sully describe K-23 to him. Augustine then succumbs to his illness and the radiation. Sully and Adewole set course for K-23 to restart humanity again.