You know whom to call when you have ghosts, but who do you call when you have monsters? The Monster Squad – A group of young kids devoted to protecting their suburban neighborhood from monsters and ghouls. Count Dracula escapes Van Helsing and adjourns to modern day Earth, accompanied by Frankenstein’s Monster, the Wolfman, the Mummy and the Black Lagoon’s Gillman. The ghouls are in search of a powerful amulet that will grant them power to rule the world. Standing in their way – The Monster Squad! 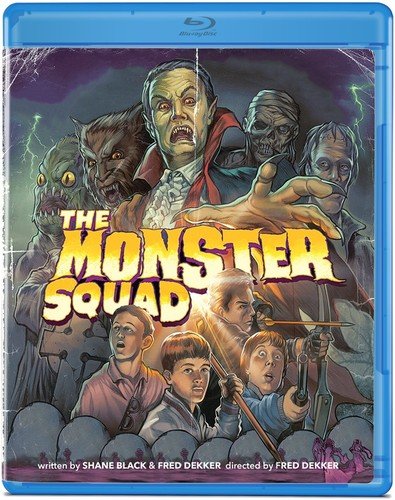 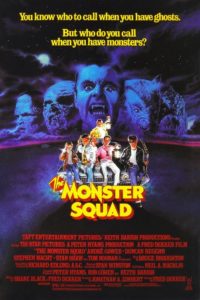 A time when Dr. Abraham Van Helsing…
And a small band of freedom fighters…
Conspired to rid the world of vampires and monsters…
And to save mankind from the forces of eternal evil….

In the present day (1987), we meet a group of 12-year olds who have formed a club they call The Monster Squad which the meet in a treehouse in Sean Crenshaw’s (Andre Gower) back yard. He has a little sister named Phoebe (Ashley Bank) who both pesters him and wants to join the little club. Also in the club is Sean’s BFF, Patrick Rhodes (Robby Kiger); their ‘80s token clumsy/fat friend, Horace (Brent Chalem); Eugene (Michael Faustino); and their latest member, Rudy (Ryan Lambert)—who’s in junior high.

We first meet Count Dracula (Duncan Regehr) on a transport plane from Transylvania where two pilots are taking cargo—including Frankenstein’s monster (Tom Noonan)— to the United States. Dracula has hitched a ride to steal the monster, and when the pilot (David Proval) goes to check a noise Dracula made in the cargo bay, he gets in a fight with the ghool. To save himself, the pilot opens the cargo door, which has the box Frankenstein’s monster is in, and it falls to the Earth. Dracula doesn’t fall when the floor drops out from under him. He transforms into a bat and flies down after the box.

Back at the Crenshaw home, we meet Sean’s mom, Emily (Mary Ellen Trainor), and his dad Detective Del Crenshaw (Duncan Regehr). The two have marital issues over Del’s inability to leave work at work. This night the two are scheduled to see a marriage counselor, but Del has to leave to go to the museum where a guard claims someone stole the Mummy (Michael Reid MacKay) on display. As Del’s partner, Detective Rich Sapir (Stan Shaw) calls Del to inform him of the theft, a desperate man claiming to be the Wolf Man (Jonathan Gries) makes a scene at the station, demanding the cops lock him up.

Once Del’s out of the house, Emily gives Sean the diary of monster hunter Dr. Abraham Van Helsing (Jack Gwillim), but it’s written in German and Sean doesn’t speak Greman. However, he has an elderly neighbor the boys have nicknamed “the Scary German Guy” (Leonardo Cimino), and they work up the courage to have him translate the diary for them. It turns our Scary German Guy is a sweet old man who is a survivor of a Nazi concentration camp. He gladly translates the dairy for the boys and feeds them cherry pie… which pleases Horace greatly.

The diary gives Van Helsing’s detailed account of an amulet that is composed of concentrated good and how one day each 100 years, as the forces of good and evil reach a balance, the otherwise indestructible amulet becomes vulnerable to destruction. The boys learn that the 100 years is up in less than 24 hours and they need to take possession of the amulet by the stroke of midnight. Then they need to have a virgin girl recite an incantation to open a wormhole which will cast the monsters into Limbo forever.

Dracula finds the amulet sealed behind a hidden stone room in the basement of the estate. However, Van Helsing has placed many charms around it which prevents the monsters from taking it. When the Monster Squad breaks into the house, Sean finds the amulet as well and takes it before the group narrowly escapes Dracula and the other monsters.

As midnight approaches, the Monster Squad goes to the local church to perform the incantation. As they head there, Dracula goes to Sean’s home to kill him. He blows up the clubhouse with dynamite as Del arrives home from a tip the Wolf Man left that his son’s in danger. When Dracula sees Del, he uses his last stick of dynamite to blow up Del’s cop car. Detective Sapir can’t get out of the car quick enough, and he dies inside it.

Scary German Guy drives the Monster Squad to the church, but the Mummy blocks the road before managing to jump on to the car to kill the kids. Rudy ties the end of one of its linen wraps to an arrow and shoots it into a passing trees. The car driving off unwraps the Mummy, finishing him off for good.

At the church, the boys find it’s locked so they have Patrick’s older sister, Lisa (Lisa Fuller)—the only virgin they know—perform the incantation in the street. When the incantation doesn’t work, Lisa confesses she’s really not a virgin… that one boy didn’t count. Scary German Guy suggests Phoebe recite it instead. He helps her read the incantation as the rest of the boys fend off the monsters.

A battle ensues with the boys taking out the Gill-man (Tom Woodruff Jr.) and the Wolf Man and the three women Dracula bit on the neck to be his brides (Mary Albee, Brynn Baron, and Julie Merrill). Dracula tries to destroy the amulet but Frankenstein’s monster shows up to impale him on a wrought-iron cross. Phoebe finishes the incantation which opens a portal that will consume the monsters.

Dracula, who is still alive, grabs onto Sean in a feeble attempt to take the boy into Limbo with him. Sean is able to grab a wooden stake rolling in the road and stab Dracula through the heart. As Sean escapes, he sees Van Helsing appear from Limbo to grab Dracula. He gives Sean a thumbs up in approval before he and Dracula disappear into the portal.

The portal also begins to consume Frankenstein’s monster. Phoebe tries to hold onto him, wanting him to stay. Knowing he must go, Frankenstein’s monster lets go of Phoebe’s hand. She tosses her favorite stuffed animal to him as he fades into the portal. It closes forever and the world is saved.

As the film ends, the United States Army arrives because Eugene has sent them a letter asking for their help against the monsters. When the general fails to understand what the boys are telling him, he asks who they are. Sean steps forward with their business card and says they’re “The Monster Squad”.