In 1290 B.C., a traitorous high priest of the Pharaoh is buried alive. The powerful priest vows to return to life and resurrect his beloved mistress. Seven hundred years later, soldier and adventure Rick O’Connell stumbles upon the hidden, buried city of Hamunaptra, the last resting place of the mummified priest. Soon, Rick leads an expedition to search for the city’s treasure and unwittingly unleashes the Mummy upon the Earth. Now, Rick must lead a rag tag group of historians and warriors to stop the Mummy from taking over Egypt and eventually, the world. 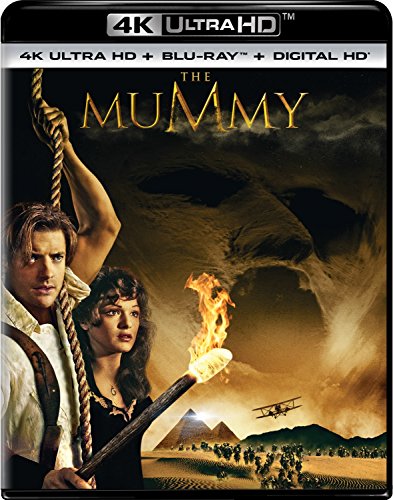 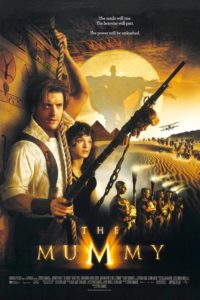 In 1290 B.C. in the city Thebes, Egypt, the high priest Imhotep (Arnold Vosloo) secretly has an affair with the Pharaoh Seti I’s (Aharon Ipalé) mistress, the beautiful, but dangerous Anck-su-namun (Patricia Velásquez). When the Pharaoh discovers the affair, both Imhotep and Anck-su-namun kill the Pharoah. After the murder, Imhotep flees Thebes while Anck-su-namun remains behind to fight the guards, believing that her love will be able to resurrect her. Imhotep and his priests steal Anck-su-namun’s corpse and travel to the city of the dead, Hamunaptra. The resurrection ceremony is stopped by the late Pharaoh’s bodyguards, the Medjai. As punishment, Imhotep is buried alive with flesh-eating scarab beetles and sealed in a sarcophagus which is placed near a statute of the Egyptian god Anubis. The Medjai vow to guard the city through the centuries to prevent Imhotep’s return.

In 1923, American Rick O’Connell (Brendan Fraser) fights alongside the French Foreign Legion near the Anubis statute against an army of Medjai warriors. The French Legion are defeated, leaving only Rick alive. Rick is about to be executed by the Medjai when Imhotep’s evil presence manifests itself and causes the Medjai to flee. Rick is left to die in the desert but survives and makes it back to civilization.

Three years later, Jonathan Carnahan (John Hannah) presents his sister Evelyn (Rachel Weisz) with an intricate box and map that allegedly leads to Hamunaptra. Evelyn is a librarian and an aspiring Egyptologist, but she is a little naive to the ways of the world. Jonathan reveals that he stole the box from Rick, and he and Evelyn travel to Egypt to ask Rick about the map and the city. They find Rick in prison about to be executed. Evelyn negotiates with the prison warden, Gad Hassan (Omid Djalili), for Rick’s release and promises the warden a share of the treasure allegedly buried at Hamunaptra. Hassan agrees to release Rick but insists on traveling with the group to the city to protect his investment.

It is better to be the right hand of the devil than in his path. Beni Gabor (Kevin J. O’Connor)

Rick leads the group across the desert to the city. Along the way, they encounter a band of American treasure hunters that are being led by famed Egyptologist Dr. Allen Chamberlain (Jonathan Hyde) and guided by Rick’s cowardly acquaintance Beni Gabor (Kevin J. O’Connor). Both groups are attacked by Medjai soldiers who are looking for Evelyn’s box and map during their journeys. Each group arrives at the city at the same time, but each group works independently from the other. Meanwhile, Evelyn looks for the Book of Amun-Ra, a solid gold book supposedly capable of taking life away. She discovers that her box turns into a key and opens the tomb. In the tomb, she discovers a sarcophagus. At that same time, the Americans discover a sealed chest that warns anyone that to open the chest means death. During this initial venture into the tomb, Hassan is killed by a scarab that enters his body and eats away at his brain.

That night, both expeditions are attacked by Medjai soldiers led by Ardeth Bay (Oded Fehr). Rick forces a standoff when he threatens to destroy everyone by lighting a stick of dynamite. Bay warns them all that the buried city contains evil and gives them one day to leave. Nevertheless, both expeditions proceed with their explorations. Evelyn’s group opens the sarcophagus and discovers Imhotep’s remains. The Americans ignore the warning on the chest and attempt to open it. However, when the chest is opened by the Americans’ Egyptian workers, acid shoots out and kills the workers. Ignoring the carnage, the American expedition finds the black Book of the Dead along with canopic jars that contain Anck-su-namun’s organs inside the chest. Each American takes a jar and Dr. Chamberlain takes the book. Beni flees the scene out of fear for the curse.

That night, Evelyn steals the Book of the Dead from the Americans and begins reading it aloud, accidentally awakening the corpse of Imhotep in the sarcophagus. A swarm of locusts suddenly appears and drives everyone underground into the buried city. Both expeditions break up into smaller parties. One of the Americans gets lost and is attacked by Imhotep who takes the American’s eyes and tongue while partially regenerating his own body. Evelyn comes across Imhotep who seems to recognize her as Anck-su-namun. Rick saves Evelyn by shooting at the undead priest, before all survivors flee the city. Beni is left behind. He encounters Imhotep and begs for his life, promising to become his loyal slave. The surviving expedition members run into Bay who tells them that they must kill Imhotep before he brings death and destruction.

Both expeditions return to Cairo, followed by Imhotep and Beni. Imhotep continues to regenerate himself to full strength by killing each of the remaining members of the American expedition that possess the canopic jars and the Book of the Dead. As each American is killed, the ten plagues begin to infect Egypt and Imhotep regains more of his physical form. Rick, Evelyn, and Jonathan meet Bay at a museum. Bay hypothesizes that Imhotep wants to resurrect Anck-Su-namun by sacrificing Evelyn. Evelyn theorizes that the since the Book of the Dead brought Imhotep back to life, the Book of Amun-Ra can kill him again. She theorizes the book’s whereabouts in Hamunaptra. Imhotep corners the group with his army of slaves, and Evelyn agrees to accompany Imhotep if he spares her friends and brother. Imhotep agrees and then attacks them anyways. Rick and the others fight their way to safety.

Imhotep takes Evelyn and Beni back to Hamunaptra. They are pursued by Rick, Jonathan, and Bay, who enlist the help of retired World War I pilot Winston Havlock (Bernard Fox) to fly them there. The plane crashes due to one of Imhotep’s sandstorms, but only Havlock is killed. Rick, Jonathan, and Bay enter the buried city and locate the Book of Amun-Ra, but they are cornered by Imhotep’s mummy priests. Bay sacrifices himself so that Rick and Jonathan can escape with the book. Imhotep reanimates Anck-su-namun’s mummified remains and prepares to sacrifice Evelyn, but she is rescued by Rick and Jonathan. Evelyn reads from the Book of Amun-Ra which makes Imhotep mortal again. Rick stabs Imhotep, who dies and vows revenge.

The temple begins to seal itself after Beni accidentally sets off a booby trap while looting the city of its riches. Rick, Evelyn, and Jonathan escape before it closes, but Beni is trapped inside and is killed by a swarm of scarabs. Once on the surface, the heroic trio discover that Bay survived his battle with mummies and made it safely to the surface. Rick, Evelyn, and Jonathan say goodbye to their new friend and begin heading back to Cairo on a pair of camels that carry treasure that Beni had loaded them with.