The New World reimagines the apocryphal story of the meeting of British explorer John Smith and Powhatan native Pocahontas as a romantic idyll between spiritual equals, then follows Pocahontas as she marries John Rolfe and moves to England. 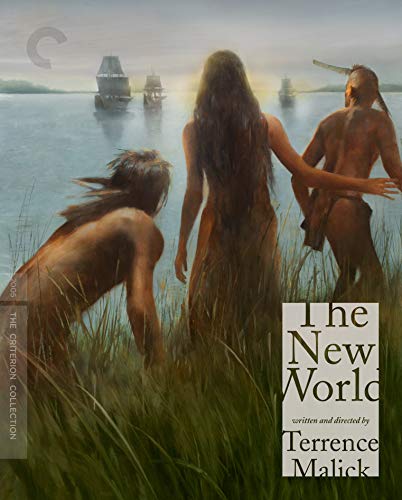 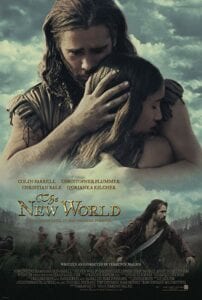 The New World begins in 1607 with Pocahontas, the spirited and adventurous daughter of Chief Powhatan. She and others from her tribe are witness to the arrival of three English ships that will found the Jamestown colony in the New World. Captain John Smith is chained aboard one of the ships because he’s been sentenced to death for his mutinous remarks. However, once he’s ashore, the expedition’s leader, Captain Christopher Newport, pardons him.

Although everyone is hopeful for a successful colony, disease, poor discipline, and shortages run rampant. Throw in many tense encounters with the local Native Americans, and our little expedition is in serious jeopardy. Smith leads a small group of men upriver to establish trade routes while Newport returns to England for more supplies.

While Smith is out on this mission, a group of Native Americans capture him, and take him to Chief Powhatan. The Chief nearly has Smith executed after questioning him. It’s only when Pocahontas intervenes on his behalf that his life is spared.

Smith lives with the Natives as their prisoner for a while. They treat him well, and he soon earns their respect and friendship. He falls in love with everything about this new way of life including falling for the chief’s daughter, Pocahontas.

Smith isn’t like the other fellas she’s ever known, and his Englishness intrigues her very much. Eventually, the chief sends Smith back to Jamestown with the agreement that the English will leave the following spring when their boats have returned.

Once back in Jamestown, Smith finds nothing but turmoil. He becomes its governor, and the peace he found with the Natives is quickly replaced by death and local difficulty. While there’s nothing more he’d love to do than to return to Pocahontas, there’s no chance that’d happen now. His time there was nothing more than a dream which he has now awoken. A brutal winter hits the settlers, and their numbers rapidly dwindle. It’s only when Pocahontas and a rescue party arrive with food, clothing, and supplies that they are saved.

Spring eventually replaces the bitter winter, and Pocahontas is quick to realize that the English don’t intend to leave. Chief Powhatan doesn’t like Pocahontas’ saving Jamestown, and he orders his braves to attack it before exiling his daughter.

The settlers fend off the attack, and soon learn that Pocahontas was banished for her help. On a trading expedition up the Potomac, Samuel Argall convinces some settlers to abduct Pocahontas from the Patawomecks, and try to negotiate with her father an exchange for some captive settlers.

Smith opposes the plan, so the settlers remove him as their governor. They bring Pocahontas to Jamestown, where she and Smith rekindle their love for one another. Soon Captain Newport returns, and he complicates things more.

Newport relays an offer to Smith from the king about leading his own expedition to find passage to the East Indies. Now he finds himself torn between his love of Pocahontas and his desire for a successful career.

The good captain takes the offer, and decides to return to England. Before he departs, he leaves instructions with his friend to tell Pocahontas that he drowned two months after he leaves. This news of course which leaves her sad, alone, and depressed.

However, she continues to live in Jamestown, where she eventually meets a new settler named John Rolfe. He helps her adapt to her new life as an Englishwoman. She’s baptized and educated before eventually marrying Rolfe. They have a child named Thomas.

Sometime later, Pocahontas learns that Captain Smith never died, and is still alive and well. She rejects Rolfe, so she can be with Smith once again. Rolfe takes his entire family back to England. Once in London, they have an audience with the king and queen; leaving Pocahontas overwhelmed. She soon also gets a private meeting with her real love, John Smith too.

Their reunion is quite uncomfortable. Their lives have taken different paths, and neither are the same person anymore. Smith does admit that he made a mistake in choosing his career over his love for Pocahontas. She asks him if he ever found his Indies, and he replies, “I may have sailed past them.”

The two part ways; never to meet again. This encounter makes Pocahontas realize that Rolfe is every bit the man she thought he was and more. She finally accepts him as her husband and true love. Pocahontas and Rolfe make arrangements to return to Virginia, but before they depart, she falls and dies.

The film ends with Pocahontas, Rolfe, and Thomas playing in the gardens of their English estate. Rolfe i heard writing a letter to Thomas about his deceased Native American mother.

The film closes with Pocahontas speaking out, “Mother, now I know where you live,” and Rolfe and Thomas then returning on to America on a ship.